Well. I’m glad I got these while I could. Not much in the way of explanation JJ ... are they all NLA? @JunkerJorge

nemo said:
Not much in the way of explanation JJ ... are they all NLA? @JunkerJorge
Click to expand...

Noodler's announced that as of today they are renaming and/or discontinuing a large number of their inks. I didn't get into details so as to not venture into politics. But these three are all on the chopping block. 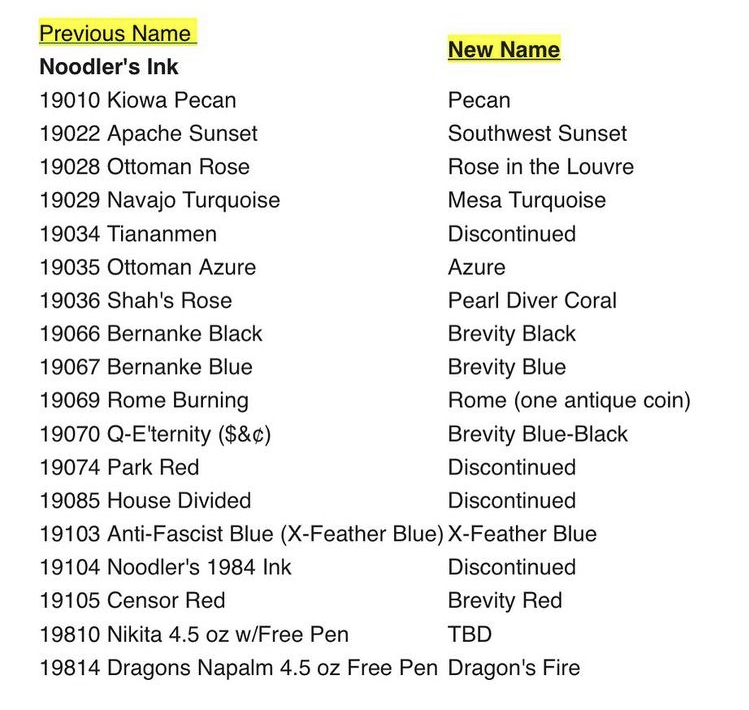 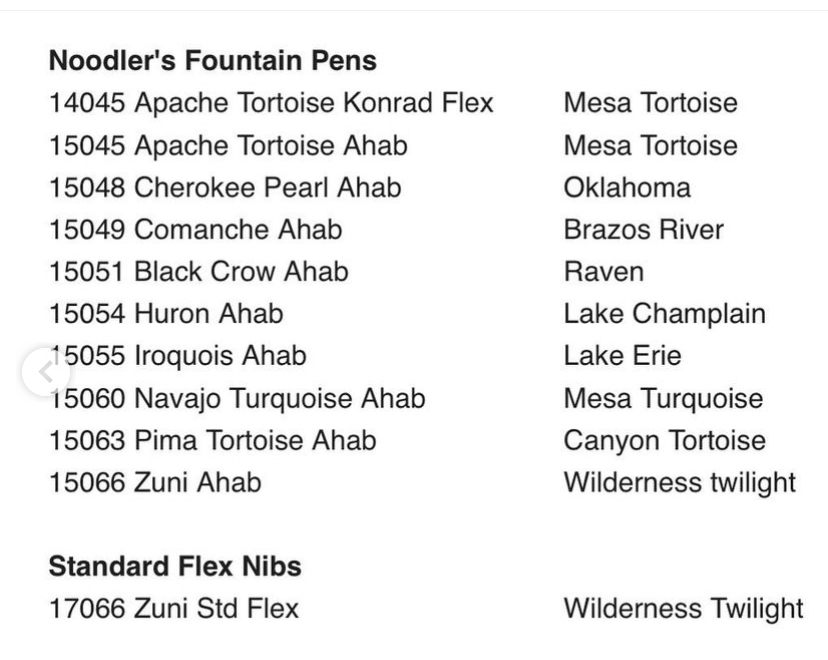 #19103 was much better before the change. Graphically speaking.

Search on Reddit for Noodlers rebranding. Several vendors including Goulet Pens have dropped or suspended sales of Noodlers products. Noodlers is rebranding in response. Noodlers also issued an apology on Instagram.

JeffJ said:
Search on Reddit for Noodlers rebranding. Several vendors including Goulet Pens have dropped or suspended sales of Noodlers products. Noodlers is rebranding in response. Noodlers also issued an apology on Instagram.
Click to expand...

I’m just curious how successful a rebrand can be. The brand is certainly a lot less interesting now. They likely have two groups upset at them now. But hey at least they are in retailers I guess.

Less drama and more focus on the product (fountain pen ink) should work out okay in the long run.
M

Why has Noodlers had to issue an apology on Instagram? Because they named products in a certain way? C'mon when will this ever end?

Marco63 said:
Why has Noodlers had to issue an apology on Instagram? Because they named products in a certain way? C'mon when will this ever end?
Click to expand...

I don't know the specifics of the controversy but some of these renames seem particularly petty.

Marco63 said:
Why has Noodlers had to issue an apology on Instagram? Because they named products in a certain way? C'mon when will this ever end?
Click to expand...


Sorry, couldn't resist... maybe that bike landing on my face in the 7th grade did more damage than just cosmetic, doggone!

And if you were wondering, I was referring to baby chickens, NOT human females!


Man, it's a good thing I retired before I got cancelled. I keep THIS up and I'll NEVER get selected for the Supreme Court!
M

Somebody once said, I recall an American President, 'Speak softly and carry a big stick'. Big sticks have disappeared, remain the soft talkers

Having looked into this a bit, my take is that the younger generations in the Reddit fountain pen community used their big economic stick very effectively on this one.

I guess tweets are currency these days.

Who knew there was this much drama with FP ink.

Some of the name and picture changes are long overdue. I'm not easily offended, but can see how many would/could be by their labels.

To be honest, I'm surprised it hasn't happened sooner.

They should also spend some time focusing on ink that doesn’t gunk up pens.
Ha ha jk
But fun to pile on.
A more successful rebranding program should include refunds for past purchases. That would be an apology

From what I understand, the issue blew up because the Bernanke Red ink had a picture that appeared to employ strong historic anti-semitic tropes about jewish bankers. In any event it had Ben Bernanke with devil’s horns and the caption “debt addiction enabler”. The reaction within the Reddit community, accompanied by explanations of the historic context of such images, caused some vendors to reconsider stocking Noodler’s products, and everyone (Noodler’s included) to re-assess the acceptability of what Noodler’s was putting out, including other inks with politicised messaging or naming related to certain racial groups.

It seemed perhaps that Noodler’s and their vendors may have been fairly ignorant of the meaning and history of images and names that were used by Noodler’s. Anyway, all involved have issued apologies and agreed that Noodler’s needs to take the politics and controversial imagery off their products. The people behind Noodler’s and some of the prominent vendors did seem very contrite and accepting of the points raised, which they said has been an education for them.

We will see how people feel about Noodler’s after this. I guess it is a lesson that businesses are unwise to put out controversial political opinions, even if they don’t fully understand or believe in it and are just trying to be edgy or humorous. Customers just want the product and they are not necessarily happy to hear about the political opinions of the manufacturer - particularly if these are highly divisive.

There was some stuff like this a while back in the shaving community about Shannon’s Soaps, when it turned out the owner was also active in disseminating extreme QAnon conspiracies through her social media. No doubt some customers don’t care, but certainly there are others who would never deal with the brand again after seeing the unvarnished views of the owner. It’s just not smart to go there - believe whatever you want, but if you are running a business keep it private.
Last edited: May 14, 2022
You must log in or register to reply here.

S
I think I’m starting to step into the rabbit hole….

Need a Spring/Summer Scent or two