Contributor
Hi All,
I managed to make a small improvement today in my technique and I thought I would share. My apologies if this has been mentioned 100 times in the past by other B&B members!

For the 4 or so sets of scales that I have made so far, one of the challenges has been making a wedge that actually has the right angle (which I’ve read is around 7 degrees). Pretty easy to file or sand a blank with nearly parallel faces, but I’ve struggled to generate an angle of this range between the faces. Specifically the angled face is rarely planar, usually convex when a freehand it. Which if bad enough leads to gaps between the scales and wedge.

My current interest in straight razors started as an interest in kitchen knives and so I possess an EdgePro system, which is basically a device that locks in a bevel angle for sharpening a knife. So I took the wedge blank and taped it to the deck - actually I taped the lower end over the plate that usually sets the knife depth - this knocked a few degrees off the angle. Then I set the movement arm to the minimum angle of 10 degrees. With the blank offset, that gave me an 8 degree angle according to my iPhone plumb bob. Then I taped some 80 grit W/D to a EdgePro blank, loaded it up and in a few minutes had a wedge with a roughly 7 degree angle! 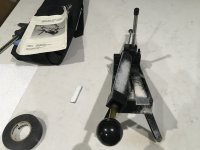 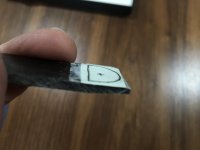 Fabulous idea. I've thought about making a jig to hold a steady angle, as almost every wedge takes me at least 2 tries to get right. In the end, even a failure costs nothing but scrap wood and 3 minutes of time while using a bench disk sander. That's what has kept me from making a jig. In your case, you have one already so you should use it!

Thanks a very clever idea. I am going to try that one myself.
You must log in or register to reply here.