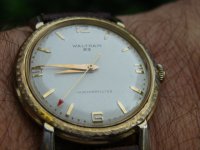 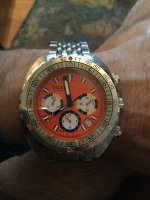 New watch, dressed down a bit. 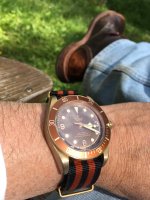 That Nato Strap looks good with that!!

skypsyd said:
That Nato Strap looks good with that!!
Click to expand...

Thanks Dave. I have a couple solid colors on the way too.

it was MuDu Monday yesterday ... after being MuDu week for the previous seven days I was out of town. Have had this MuDu watch for some time but only recently got a round to having Paul's Watch Shop in Sacramento do a service on it. They rehab'd it nicely. Lost a minute and 15 seconds for the eight day period which is "close enough for the girls I go with."

MuDu watches have a mysterious and murky history. Apparently produced in Europe by a very decent, yet to this day never revealed, manufacturer in the 1950s and 1960s and smuggled into the UK to be sold from the docks and in the pubs in order to avoid paying the stiff import duty there. MuDu watches were said to be sold without any strap or bracelet, requiring the new owner to provide one. This one has a 25-jewel Felsa 4007 automatic movement and is rose gold plated, in a really rosy pink hue. The watches aren't commonly seen (especially in the US), yet have no big collector value. It cost more than this watch is probably worth to do the needed service, but it was done for the fun of it. Most surviving examples are beat to death, scratched and with the plating worn through. Apparently their original dockworker owners wore them to work.

George Martin, the Beatles producer is apparently wearing a MuDu on a perlon strap in this undated photo.

I enjoyed reading this mini history about the MuDu watches. Nice pictures and attractive dial on yours. Good to see confirmation that wearing a perlon band with a dress watch is not a new thing. 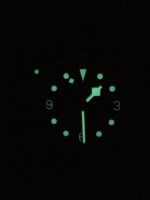 "And now for something completely different."

A bit of whimsy to trade "Swiss Made" for "Made in England". Worn a couple days ago.

Yesterday it was a Bulova watch made the same year I was, worn while inspecting the plum tree.

The Mama mockingbird did not like me inspecting her nest discovered within. Dive-bombed me while the photos were taken.

Her retribution was to leave both plums photographed with the Bulova on the ground and well-pecked this morning when I went out to check them.

We need to crank up "Watch Ya Wearing" for the weekend.

Omega 30T2 from 1944 on a new-old-stock pigskin strap for a casual Friday.

noelekal said:
We need to crank up "Watch Ya Wearing" for the weekend.

Omega 30T2 from 1944 on a new-old-stock pigskin strap for a casual Friday.

I believe I have said it before, but that watch rocks.

Of the Omegas on hand, that watch somehow feels uniquely "Omega-y" any time it's worn. 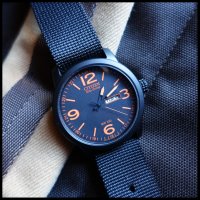 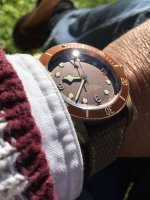