Contributor
So, washita's are a stone that's easy to get, usually unlabeled so always an adventure, wildly underappreciated; and though perhaps not ideal or necessary for razor honing, it's a great stone variety that really deserves its own thread.

Here's my collection at the moment (not counting broken stones). It's got a couple labels in there, but for the most part these are stones that live by their own merits.

Of my collection, by far the standout stone is the dark brown/red one in the top right. It's an unusual cut ~1.75x1.5x8", is very translucent, and cuts easily 2-3x as fast as any other Washita I've used. It behaves more like a Turkeystone than a Washita; though it's absolutely a Washita and leaves a Washita finish.

Two in the group are Labeled Lily Whites. Anyone want to guess which two?

Second from the bottom and fourth from the bottom in the middle row is my guess. Or starting from the top, 4th and 6th stones. I will add a shot of my horde when I get a chance too, love them Washitas.

First, these stones vary more, far more in softness/hardness than their Arkansas counterparts. The harder ones are virtually indistinguishable from hard arkansas on a lapping plate, the softer ones... well... I've had an almost pure white example, that could easily pass for a Lily white visually (unless very close)... that lapped every bit as fast as a Thuringian, and which pulled up mounds of slurry under my normal knife weight honing. What accounts for this difference? Structural integrity, which brings us to:

Second, The grades (LW/RR/#1 on down to #2, #3, etc); I theorize have little to do with color... that simply being a marketing gimmick to distinguish a "premium" #1 from the "standard" #1. What distinguishes the grades? Structural integrity... which basically means hardness or at least UNIFORM hardness. A #5 may be as hard as a #1, but it's hard in area's and soft in area's. A #1 is uniformly hard throughout. What DON'T you see on the surface of higher quality washita's (labeled or unlabeled)? The little broken bits... that look like the flaws in cast cement or other similar materials caused by air bubbles. The "gaps" in the surface... beyond the normal pores. The ones that aren't pores, but are actual breaks in material. Those flaws are what structurally compromises these stones... making them faster... but making them wear faster, feel worse under the tool, etc.

Thirdly, on that note. Don't think a #1 is necessarily better than a #3 for your purposes. Like I said, the lower (cheaper/worse) grade is going to likely be far more friable, and work faster. But it won't stay level as well (Will dish much faster), and will likely wear down many times faster. The cog in this (and probable reason the lower grades seemingly aren't preferred by anyone) is again, lack of uniformity. These lesser grade stones may wear unevenly; or they may be very hard, but only with pockets of soft that throws a wrench in the works of the stone wearing back to improve speed... so you can't just deliberately pick out a low grade washita and know you're getting a faster stone than a LWW. Also, this issue is likely part of the reason why so many washita's like to break in their boxes.

Fourth, related to all this again. If you're not thrilled with the feel of your washita: First, clean it. Second, lap it. Third, flip it and repeat. I've got an unlabeled or two (which I suspect are low grade examples), that feel dead with choppy feedback when they give it, and lots of breaks on one side... but the flip side is very nearly as regular as my LWW's (though softer). Lapping on both sides doesn't change the character... there's a divide somewhere within the stone. The hope is that the "good" side goes on for most of the stone, of course.
Last edited: Dec 6, 2016

Moderator Emeritus
Here's a few of mine. I suspect you're right as far as the grading system goes. The 2nd and 3rd pics are both NOS stones and you can see a big difference between the LW and the regular Washita. The LW is pure white and is a very tight stone, whereas the Washita has some blue-ish specks and is much more open and doesn't look as consistent.

Here is a vintage Lilly White ........ good for getting pocket knives sharp, and then hit them on a Soft Ark.

Moderator Emeritus
I forgot about the Rosy Red. I don't use this one very often but it's a great fast cutting stone.

Pike's label department did not play around.... They're all awesome.

Contributor
What all washita's have you guys seen glued in pikes boxes? I've got a 6" that's a decent stone but I'm pretty sure isn't LW that has the telltale circular fractures on the back left when someone pries a pikes/norton glued arkansas/washita out of the wood box. I've seen LW, #1's, Woodworkers, Carpenters, and Mechanics friends in them... but I'm not sure what else. I'm kind of leaning towards it being one of the latter, as I doubt it'd have been sold as a #1 either.

Moderator Emeritus
After Christmas I'm going to do some specific gravity test on 8-10 of my washitas to see how much they vary. I did this for an hour or so today with some of my trans and black arks and they were pretty consistent for the most part. All of the nortons were in the upper 2.60's and the ancient butterscotch trans was 2.72.

Let us know the results David; I'd be interested to know how much they vary.

I wish I had a scale with enough resolution to perform those tests accurately.

Possible washita. It's a very hard stone having lapped it flat. Good size too about 8 x 2. Gave a edge that easily cuts arm hair with a chisel straight off the stone.

Contributor
Certainly looks like a washita. That's one of the faster, rougher grades I encounter. I saw one sold as a "Turkey stone" by a UK seller arguing "Called that because it resembles turkey skin" that went for a lot of money (for an unlabeled washita). I rather like these stones, but they can be a bit tougher to keep cleaner.

Picked that one up in a lot a couple years ago. I was just getting into waterstones then and put it aside. I have no other oil stones (for now), but I wondered, would one go directly to a hard or trans Ark after a washita for polish?

Jayber Crow said:
Let us know the results David; I'd be interested to know how much they vary.
Click to expand...

I checked SG on 5 washitas tonight. I'm sure the oil is throwing my measurements off, but just for fun...

Dcaddo111 said:
After Christmas I'm going to do some specific gravity test on 8-10 of my washitas to see how much they vary. I did this for an hour or so today with some of my trans and black arks and they were pretty consistent for the most part. All of the nortons were in the upper 2.60's and the ancient butterscotch trans was 2.72.
Click to expand...

That's very interesting given the SG of quartz, which less-and-less porous forms of novaculite should be asymptotically approaching, is 2.65. I wonder whether whatever trace impurity gives that stone its coloring is really dense.

Contributor
Jumped on this one's BIN because of the threat of David finding it.

SliceOfLife said:
Jumped on this one's BIN because of the threat of David finding it. 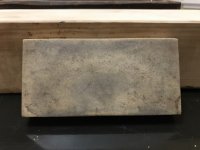 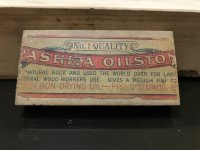 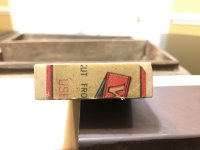 Here's a neat little one with a label l that wraps up the sides. It's 4x2, which I thought was an odd size for a washita?

Contributor
My best guess is it was larger but broke, so the label was pulled off, the break sawed straight and label reattached.

I may be wrong, maybe they ran out of 4" labels so they slapped an 8" label on one, but I've seen a handful of broken washita's (none that clean) where the label was preserved.
You must log in or register to reply here.
Share:
Facebook Twitter Reddit Pinterest Tumblr WhatsApp Email Link
Top Bottom