These are a 60 year old Syrah vines, or 'Shiraz' as they call it in the Colonies: 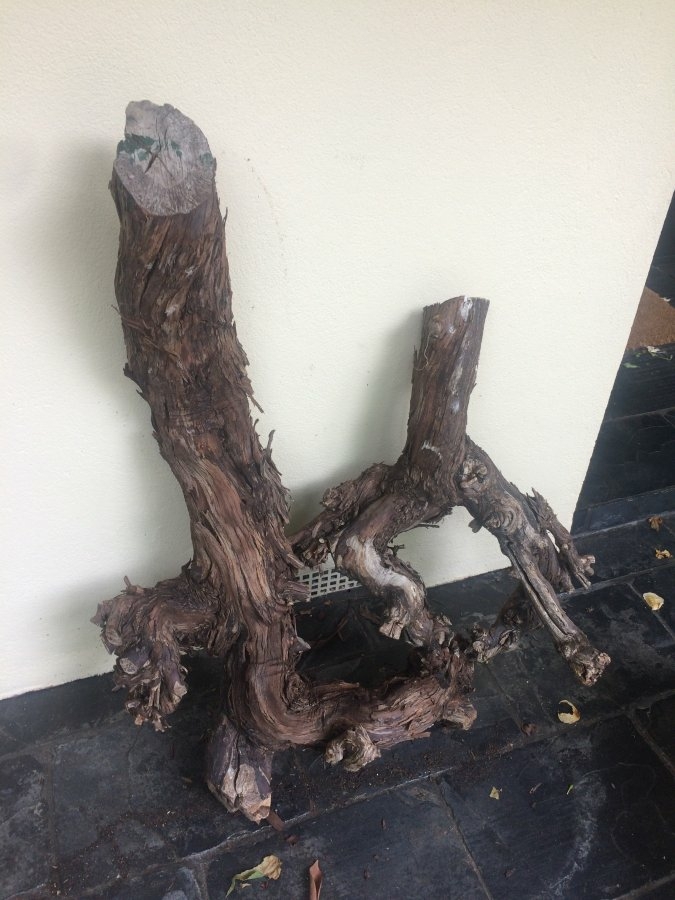 And if you cut them up and shape them a bit, the wood looks like this: 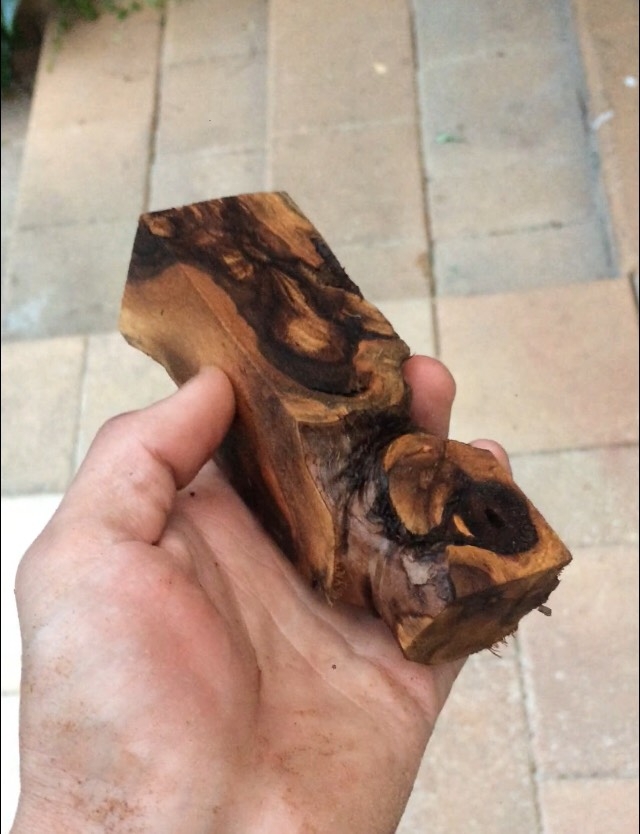 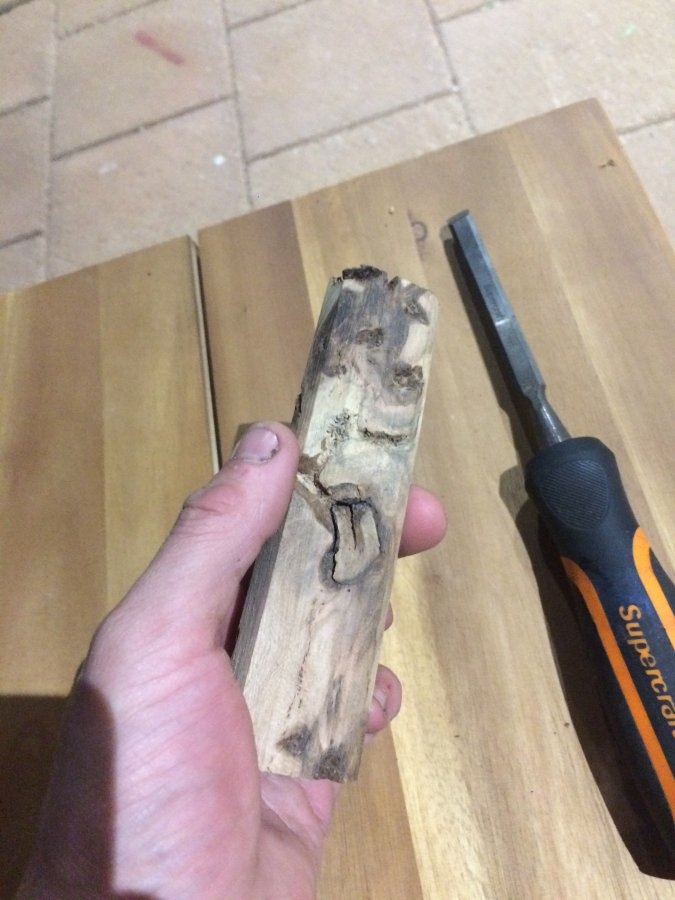 At which point I dig out the faults with a meuchi spike or chisel, and fill up with 5 min araldite. Either clear, or in this instance coloured by mixing some mica powder in: 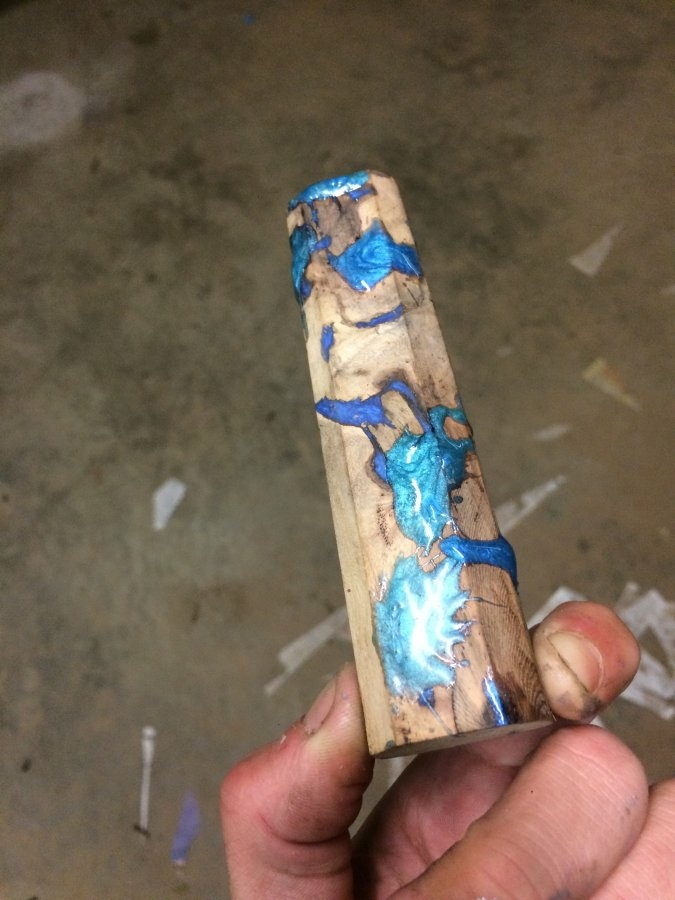 Once that's set it's back on belts to remove. The above pictures are actually of a knife handle, but I did the same for a razor one evening last week, though didn't take any pics until this stage: The handle there is just off belts and after being drilled. This is going to be a 'one-piece' handle, which takes a little less time than multi-piece handles, but is markedly more difficult to get right.

In the pic above it's actually a bit too long, so I took some more off the end, before oiling and starting on hand sanding for the final shaping. Razor handles I try to leave at quite a low grit, cos they're gonna get wet and slippery. Something like 240 or 400.

Handle gets finished with 'hardwax oil' - a Tung oil (I believe) based blend of oils and waxes, that's food safe and sets hard and waterproof. Also comes in a range of finishes going from matte up to high gloss, and you can play around with it too by choosing how completely you let it set. Then the razor fixed in place using the same 5 min epoxy.

Et voila... here's my Syrah-Vinewood-Wa-Handle Wilheim Weber. I'm quite happy with it: 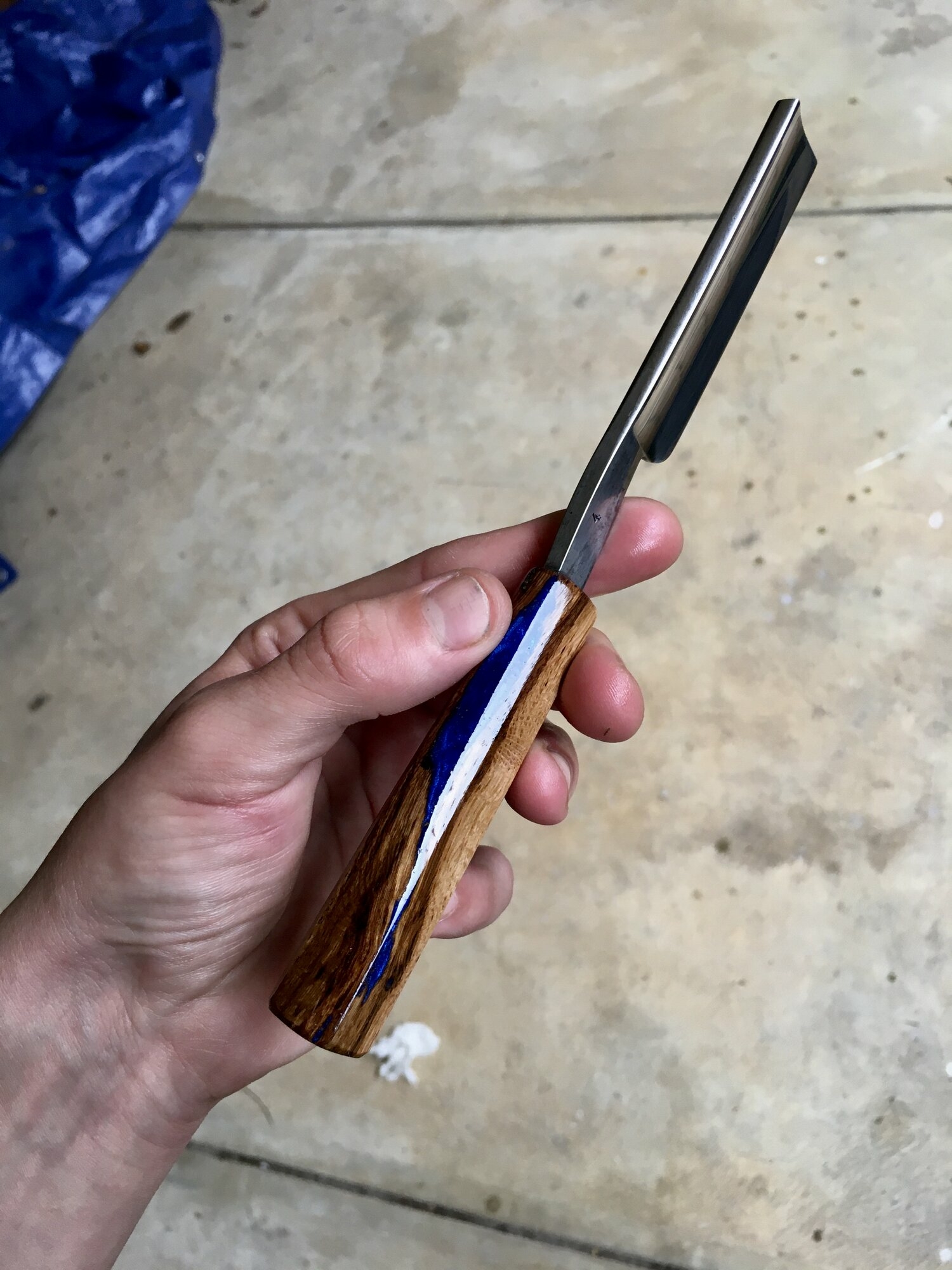 Here's an example of a multi-piece knife handle from the same vine wood. With a steel-winemaking oak-steel spacer, and a buffalo horn ferrule: 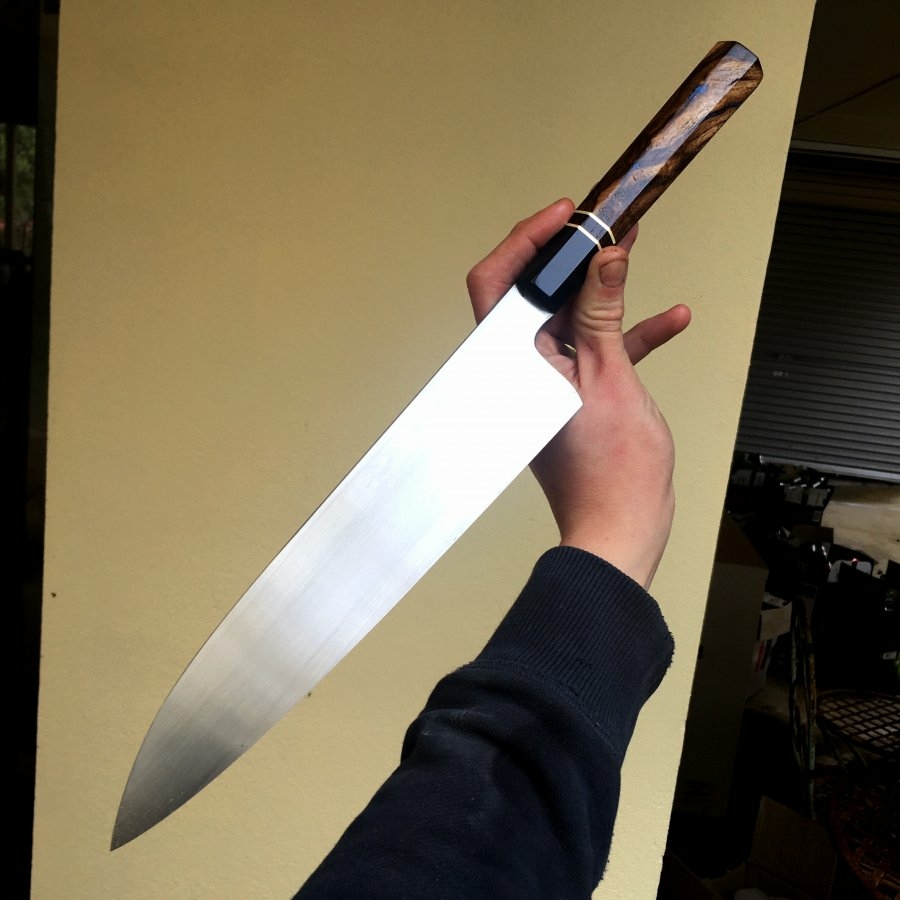 Awesome project, thanks for sharing your passion and skills!
B

That transformation is amazing. Those are works of art.

nicked78 said:
Awesome project, thanks for sharing your passion and skills!
Click to expand...

Bobbers said:
That transformation is amazing. Those are works of art.
Click to expand...

There are both benefits (imo), and drawbacks of having fixed handles like this on a razor. But they can certainly be quite pretty .

I had actually already made a handle for the razor in this post, though I wasn't quite happy with it, so wanted a slightly tweaked desgin. The razor itself is very good indeed, but the imperfect handle just made me slightly irritated when I used it. It was the second fixed-handle razor I did, and looked like this: The big differences between that design and the new one is that the new handle is set at more of angle. It was an idea I'd thought about originally, but dismissed as too difficult to drill, but then was suggested again by @Darth Scandalous I believe, so I tried it on another razor and it worked out very well indeed. In part because a happy by-product of trying to build some angle in, is that more of the tang or neck of the razor is exposed - there is more distance between the handle and the start of the razor proper...

I don't particularly like the traditional scaled handle design of western SRs. I think it's too long, and too bendy, and too pivoted. And when you move it around - the X axis balance point changes. There aren't many other tools or instruments with handle designs like this, try using an axe or a spoon with a pivoted handle that moved about the place like that and you'd be needing a trip to the A&E ward or dry-cleaners after.

I don't put fixed handles on all my SRs - they're about half and half atm, and I like having both. But I do personally find a fixed handle is better for honing/stropping, and at least as good in use*. The really big benefit of a folding handle over a fixed one, is (obviously) being able to fold it up, and prevent risking damage to your edge between shaves and when travelling.

But there's one other thing that a traditional pivoted SR handle is very well designed for, which may not be immediately apparent if you haven't compared them a lot against fixed handles / spend way too much time thinking about this nonsense... They're very good for ATG shaving on your neck. And to be able to that well with this kind of fixed handle razor you need a slight angle, and importantly - more tang.

Below is a pic of the four fixed handles I've done. The top one is not ideal; it doesn't matter so much that it's a different shape, but it's set straight, and has a short neck. Though it works just fine and was the first one I did, so I'll probably keep as is.

The second is also set straight, though it has a little more neck and the handle's narrower, which helps.

The third is a really good design; angled and with a differential taper.

And the fourth is the new version of the Wilheim Weber with even more neck and angle. It necessitates the handle being longer to get proper balance, but that shouldn't effect it in use, this I think will be a very good design and fit also. * When I said this over on SRP and posted some pictures of fixed handled razors, I was met with considerable opprobrium! People here seem a little more receptive to the idea that others can have differing likes and opinions about stuff .
Last edited: Feb 8, 2022

Regrettably many grapes were harmed in the making of this show.
A toast to their contribution to shaving

I too think that you have about perfected the fixed-handled SR design in your fourth. I would love to shave with a SR like that. The only drawback, as you have stated, is that there is no protection for the blade's edge between shaves. That is also why I have shyed away from Japanese ground kamisori SR's with fixed handles.

JaggardJ said:
Regrettably many grapes were harmed in the making of this show.
A toast to their contribution to shaving

Haha! I have good news on the front... the vines came from a Barossa vineyard that was being leased by a friend of mine who's a winemaker. Eventually it had to be grubbed up and replanted a few years back because of a fungal disease called eutypa, or 'dead-arm', so they would have died anyway. And it actually has an interesting effect on the colouring of the wood - there's a kind of spalting effect that gives contrast between the darker dead wood, and lighter living wood.

My mate was just using the (now dried and cured) vines as firewood, so I nabbed some about a year ago and started playing around .

* When I said this over on SRP and posted some pictures of fixed handled razors, I was met with considerable opprobrium! People here seem a little more receptive to the idea that others can have differing likes and opinions about stuff .
Click to expand...

It's actually not a new or wacky concept. Just the other day I saw a picture of an antique French razor with a very fancy fixed mother of pearl handle. I wish I'd saved a copy, because I cant find it now.

In the case of that one, it looked so fancy I suspect the design was intended to be used by a servant giving the master his morning shave. In that situation I think a fixed handle would be easier to wield. Kamisori were the same, back in the olden days. People were shaving their head more than their face, and the job was usually done by a barber, or some other helper, so the asymmetric grind and fixed handle are perfect.

rbscebu said:
I too think that you have about perfected the fixed-handled SR design in your fourth. I would love to shave with a SR like that. The only drawback, as you have stated, is that there is no protection for the blade's edge between shaves. That is also why I have shyed away from Japanese ground kamisori SR's with fixed handles.

With my SR shaving technique, the razor spends about 75% of its time opened 180° while shaving.
Click to expand...

Ta... I remember you were encouraging, and helpful, with your thoughts and feedback on the earlier iterations - cheers!

I do certainly need to make some kind of travel box next I think. They all sit happily both spine down, or on their side. So putting back on a shelf is fine if you’re careful, but taking them anywhere while preserving the edge is basically impossible atm.

Now that I think about it... one other slight advantage that fixed handles might have, is how easy they are to dry. With my scaled handled razors I spend a bit of time faffing around trying to dry them properly - inside the scales etc. And I can’t really tell if the areas around the pins might be developing any rust. They don’t seem to be atm, but it’s tricky to tell. Any good tips for that? Do you oil yours occasionally or anything?

Ah thanks! I think they’re quite cool, and nice to have something a bit different when restoring razors with plastic handles. I wouldn’t do it on nice old bone or ivory handled razors, but plastic scales are fair game I think.
You must log in or register to reply here.

I just made my own backpacker's stove (penny can stove)
2