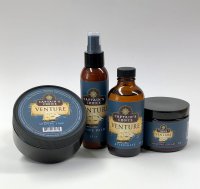 (vĕn′chər)
1. An undertaking that is dangerous, daring, or of uncertain outcome.
2. A business enterprise involving some risk in expectation of gain.

Tell us a "venture" you have had yourself. There will be three winners selected by random.org. This is CONUS only please. Each winner gets to select one Venture product from our store. Once it arrives and you have a chance to use it, post a picture back here and tell us what you think.

Good luck to each of you!

I'm in. My most recent venture didn't start out that way. I was on a tour of Japan last year and there was a side trip to a hidden shopping spot. I followed along, but decided to break off from the group to head back to the bus. Well it turns out that the spot was so well hidden that I got lost going back to the bus and after searching for the bus until I knew it already left, I now had to find my way back to my hotel by myself. I had to stop in several shops to ask questions mostly from folks that did not speak English. Five hours and 10 train stops later, I arrived at the right hotel (I originally was directed to the wrong hotel) and was immediately told by the tour escort that he had called the police, home office, and US Embassy and will now have to tell them I was safe.

Yeah, okay, I know folks got more exciting things they will post, but for a geezer receiving social security, this was really about as big a venture as it got, and I am sure nobody wants to hear of my making my first batch of sauerkraut and leaving it unatteded for a week.

Moderator
Mid 90s I was stationed at Kunsan AB, Korea. Few left the base, except on guided tours. Instead, I opted to ride the bus into Kunsan City on the weekends and jump on a city bus to some part I had not explored. I would spend the day wandering back to the main highway, checking out shops and stores, shrines, hitting coffee shops, and the occasional Soju tent... Most Koreans speak some English, so questions were usually answered and help given. Somewhere I would get dinner, rarely knowing what I was actually eating, but it was all good. Back to the base I would get, and everyone else is complaining about being in Korea and how bad it was. I had a great time.

Way back when (late '70's) I was in the Canadian Coast Guard & was put aboard a freighter with a hole punched in her side. Late night, north Atlantic & in a storm. I was supposed to go aboard & rig up temporary ballast pumps to help get rid of her 20 degree list to starboard. My ship was called away on another search & rescue call & I was left aboard a ship where no-one spoke English. The vessel was being towed by a Canadian naval vessel so I went with the freighter to an east coast Canadian port. I was able to get a ride back to my home port with the Canadian naval vessel. Good thing as I didn't even have my wallet! Quite an adventure for a young Marine Engineer & happily it ended well.

I’m in. I’ve had a few, but one of the most memorable would be the summer spent in Israel, working a dig in Tel-Ashkelon, wondering about on weekends, and extending my return lay-over in Greece for a week.
I loved the 2-week, self created itinerary in Italy, and would do a similar trip in heartbeat, but I’d never be able to duplicate that summer of ‘95. I had no idea of what to expect, but it exceeded every expectation.

Contributor
Ambassador
The only venture I can think of is asking my wife to marry me. I wasnt sure the outcome but I'm glad I did! Although, it still can be dangerous at times, like when I say the wrong thing and get "The Look".

Sent from my SAMSUNG-SM-G930A using Tapatalk

Contributor
Not in, but probably my scariest adventure was being 9 years old and taking a commercial flight without my family to my aunt & uncles in Tennessee. It was only about a 2 hour flight, but I was really scared. It was 1972, so the cliches you see in movies about being pampered by "stewardesses" and taken into the cockpit where the pilot gives you wings are all true.
R

Not in, having won a couple of the Captain's drawings. Mainly, I want to add that I got the Venture splash and it is a pleasure.

Vendor
Not in but going dog sledding was pretty extreme for The Captain. Myself, another Scout leader, and two guides along with six boys made up our group. Went north out of Ely which means along the Canadian border. Thought I knew what quiet was until then. Mighty quiet in the north in winter. Cold too and as still as you can imagine - not a breath of wind. No tents. Each of us were in our own sleeping bag and it was very comfy. Coldest night out was -17 degrees. Slept on my back each night and it snowed lightly one night. Had to keep blowing the snow off my face. One of our boys was walking around in the morning with FROST on his eyebrows and I have the pic. A shower never felt so good once we got back.
Last edited: Mar 13, 2019

Contributor
Ambassador
For reasons I still can’t figure out, a buddy and I decided to ride the Harleys up to Winnipeg, Manitoba Canada. I left Florida, he left Maryland...met up in Nashville. From there the epic journey began.
Wandering back roads, finding our way to countless craft breweries and dive bars alike. Escaping from the wrath of an angry woman in Missouri...she was honked off at her husband and on her way home from the creepy bar we were in, planning on returning quicksmart with a shotgun to “fix that S.O.B’s wagon for good.”
My friend wanted to bug out right then and there. I decided we had time for one more beer.
Finally made it to Winnipeg...known to many Canadians as “The Detroit of Canada”. I can see why.
High part of our stay there was nearly getting into a fight in some nasty little video casino attached to the hotel we were staying in.
Fortunately no harm-no foul. All ended alright.
Like Pink Floyd calls it...” The memories of a man in his old age are the deeds of a man in his prime.” So true.....
I am surely in. The Venture cream looks most interesting.
Last edited: Mar 13, 2019

ven·ture
(vĕn′chər)
1. An undertaking that is dangerous, daring, or of uncertain outcome.
2. A business enterprise involving some risk in expectation of gain.

Tell us a "venture" you have had yourself. There will be three winners selected by random.org. This is CONUS only please. Each winner gets to select one Venture product from our store. Once it arrives and you have a chance to use it, post a picture back here and tell us what you think.

Good luck to each of you!
Click to expand...

I’m not in.
Just a note today that I’m enjoying my tub of Venture and liking the scent.
As always, it continues to give me the WORST shave ever.

I am in please.

Year before last, my wife and I decided to go see the Ark Encounter up in Kentucky. I had taken a week of vacation and we had nowhere to be ... so. We made arrangements to have our pets taken care of and someone to pick up the mail. We packed a few bags and hit the open highway with no plans, just a destination. We stopped along the way to see various things that caught our attention. Slept where we wanted to or where we ended up for the night. Hit a lot of different towns and cities along the way and had a great time. We tried various places to eat, but none were chain restaurants that we have in Texas. The food, the people, the places. We had the best time ever just wandering the country side with nowhere to be and no schedules. We took a different route home just to see more of the country.

We are considering the same thing again this year. Just heading due East and pick a direction when we hit Florida.

I'm in. In keeping with the Venture product label, I'll go with my first sailing "expedition". Friends and I went to St. Martin's for the millennium...we figured, if all went **** up with the y2k stuff, we would be trapped on a great island, so to speak. So yeah, was new years 1999/2000 time frame. Friends knew a guy with a sail boat and we all went ahead and borrowed it for a day. I had never sailed before, so the venture for me was my first time "working" on a sailing vessel. Naturally, too much sun, too much fun, too much to drink, I learned absolutely nothing that day. Supposedly we sailed about 100 nautical miles....went around a nearby island (british maybe? who knows...) Was a long day, but fun as hell...I remember that. Nothing beats hanging your feet over the bow of sail ship hitting waves...easily a great memory.

Not in for geographical reasons, so I won't go on about the polar bear hunt that ended up with me getting stitches at the Nursing Station.

Moderator
Not in as not CONUS, but I am enjoying reading the “Ventures” of fellow members.

Random.org has selected the three winners. They are:

When you do, please tell us which of the Venture products you have selected.

Congrats to all three of you and thanks to all for entering the contest!

Info sent! Thanks for such a great opportunity! Feedback to follow.