Moderator Emeritus
Now don't laugh but here is my first dripper now this one is 3 year old haha that's how long I have had it.
And its called the Big Dripper 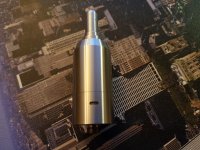 I have put 2 of these in it 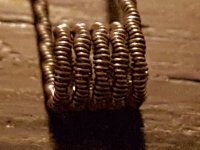 And its .48 ohm but the big dripper you push the top down as it has a sort of tank and it sprays onto the wick

Moderator Emeritus
Well folks it has arrived. Smok big baby beast, and TFV8 cloud beast and here is my first build on this bad boy.
Juggernaut Wire and sitting at .26 ohm 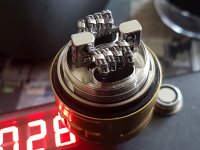 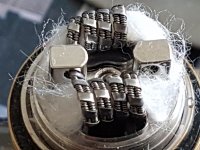 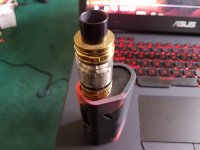 And I must say its impressive

Contributor
That is quite a build. Last month I have just been using my squonker with a hadaly. Single SS clapton coil and flavour is amazing. Tried to use my Minikin last night but couldn't get on with the amount of vapour.

Moderator Emeritus
Well @Prof.Moriarty. I must say this TFV8 cloud beast does produce a lot of vapour, and I'm running at 70watts on the low side

Ice-Man said:
Well @Prof.Moriarty. I must say this TFV8 cloud beast does produce a lot of vapour, and I'm running at 70watts on the low side
Click to expand...

Moderator Emeritus
I'm very impressed with the Juggernaut Wire, I need to try 2 more Alien .3 .8+32 GA and Double k Clapton 28*28+32GA and keep you posted on how it goes.
One thing I can say is big hands don't go well trying to build coils lol

Ice-Man said:
I'm very impressed with the Juggernaut Wire, I need to try 2 more Alien .3 .8+32 GA and Double k Clapton 28*28+32GA and keep you posted on how it goes.
One thing I can say is big hands don't go well trying to build coils lol
Click to expand...

I just don't have the patience for fancy coils. I use flattened wire either plain or clapton

Ice-Man said:
I bought the wire made just need to wrap into a coil
Click to expand...

Ah I have gotten fairly quick at that

Moderator Emeritus
Looks nice! I could never get my build deck to wick properly. I always had a full tank and dry hits. I keep it more for the car now and build on just a regular RDA. Just made a purchase of about 1200 feet of wire. That should keep me busy for a couple days anyhow.

Hi everyone. Time to introduce myself.

I vape for 3-4 years now. Started from something similar to ego stick and changed different sets. Now I am using Smok H-Priv with either limitless plus rdta or a kangertech subtank mini.

Usually mix juices with base and aroma. For six months now I use only bigmouth aromas for my juices.

Can anybody educate me about Squonkers?
I think that might be my next hardware upgrade.

I know the basics, I'm looking for Pros and Cons and recommendations on brands from someone that actually uses one.

dpm802 said:
Can anybody educate me about Squonkers?
I think that might be my next hardware upgrade.

I know the basics, I'm looking for Pros and Cons and recommendations on brands from someone that actually uses one.
Click to expand...

All I use are mech squonkers. Start a thread with your questions and I will run you through it. 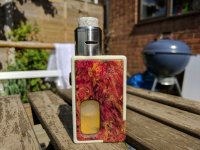 Hello. Checking in. I have been vaping since 2008. Started with dn4081 which at the time was smoking everywhere gold set. Also had an original trog screwdriver mod ising 2 cr123 batteries. Had the "original mod" the flashlight mod with a 510 fatty. Those were the days when mods blew up all the time because the cr123 batteries were not protected. Through the years I have seen vaping hardware change dramatically. Currently I have a wismic predator 220 with a smok prince cobra tank and a geek vape aegis kit. I have had so many mods and devices through the last 11 years I couldnt even begin to tell everything I have had.

I'm not new in vaping, but I'm checking in. I started in 2010 with those generic Health-e cigarettes and a DSE901, those took me from 40 cigarettes a day to 0 in a week.
Just like Suhrim21, later on I started with mods (some homemade) with unprotected 18650 batteries that with any mistake, in a split second, could get piping hot. I remember the first wicks that were like a sponge and had a bad taste, then came glass fiber wicks that were much better.
In my first 2-3 years I bought lots of stuff. Once I settled, I only had 2 kits at a time, nothing fancy, single battery mods with single or dual coil tanks, and I prefer higher res and lower wattage. Taking care of them they all last me at least 2 years of constant use. Pairing that with DIY e-liquid it can't get any cheaper.
My current kit is a Wismec CB-80 with a Vaporesso Gemini RTA.

Suhrim21 said:
Had the "original mod" the flashlight mod with a 510 fatty.
Click to expand...

Lol I made myself a mod with a small fuse box. At that moment, pairing it with a 510 fatty I thought things couldn't get any better.

Those were the days. FDA seizing packages from e cig vendors from China. Just fun fun fun. I used to make my own liquid as well. Was even going to go into business but it was squashed before it got started.

Hi all new to this part of b&b I started off with an ego moved up to an aspire nautilus on an aspire box mod then I jumped up to a twisted messes an a 200w box mod in 2015 an stoped vaping for awhile and now I’m still rocking my twisted messes an on a Kaos 200w mod and this is my first time using ss an temp control in the messes
You must log in or register to reply here.
Share:
Facebook Twitter Reddit Pinterest Tumblr WhatsApp Email Link
Top Bottom