Trying to understand why im getting shredded.. de head shave

Hey guys, been a while since I've been on, but trying to understand an issue I'm having. I've been using my 1952 Gillette fat boy for a decade or so now with feather blades. The Gillette currently needs rebuilt as it is getting a hangup in the twister that I need to figure out, so I bought a cheap drug store de razor that holds de blades and kept on my merry way until I can fix the fatboy(been a year or two like this)

Shaving my neck and face works great, but since I have started rocking a mowhawk again and shaving my head has become part of routine.

I can use the cheapest of throw away cartridge razors to shave my head... even aggressively at times when rushed... but every time I try using the de razors I end up cleaving my scalp to hell. What is it about the cartridge razors that is different, and how can I get back to running a single razor again?

1)Fix the fat boy and go with a less aggressive pitch? I normally run 3 to 5 for neck and cheeks.

2) get a new modern version of an adjustable de razor?

3) give up and buy a pit bull head shaver and or stick with throwaways for the head?

Contributor
Might be a geometry/angle issue. If you are used to DE shaving you should now about the necessary pressure - or lack thereof.

I shave my face mostly steep/riding the guard but when shaving my head I switch to shallow/riding the cap to get a good result.

I do use DE's somtimes (Tech, FOCS) but get the best results with a Razorock Eco Hawk that takes half DE blades and has a hoe type geometry - riding the cap is pretty much built into the design.

Might need to stick with the cartridges that work for you. The head is a very different shaving environment. Very few flat surfaces, constantly changing curve, skin is more sensitive on the skull, particularly with no fatty "cushion" underneath like on cheeks and neck. All of that makes for a harsh surface to run a single blade over.

If the hair has recently been shaved off, it could be the skin needs a little time to adjust. I notice bleeding on the chin when I occasionally save off the goatee for a few days.

Moderator Emeritus
Wiki Team
Contributor
The two posts above nailed it. I shaved my head with a DE for a few years but went to a cartridge. It can be difficult to maintain the correct angle a DE needs when shaving your head.

Great advice above! The issue is that head shaving presents it’s own set of challenges.

I suggest you fix the FatBoy (or purchase a backup, likely both if I were in your shoes)!

I have always used DE to shave my head, and I rarely get hurt.

The complexity of the head does increase a lot of difficulty. I think you need a gentler razor, or use less pressure and slow strokes.

I confirm that they are all low-aggressive enough to provide a comfortable and safe head shave.

If you are looking for razor recommendations, the Henson razor is the first razor that gave me a BBS shave on the back fringe of my head. Not even Gillette Fusion cartridges could do that. The Henson medium is my go-to for head shaving. Comfortable yet highly efficient. Many head shavers recommend the Leaf, but I have no experience with it, nor feel the need to try it.

Leaf is a great razor for head shaves. The spring loaded head lets the razor follow the sharp angles on your head with ease.

Its all about the angles and finding the right razor that gives the right feel for you. I find for my head a less aggressive razor, like a Starburst for instance, works perfect. Also, taking your time is a must! I also find that "pulling" the skin taught helps with with reducing nicks especially on the back of head with added benefit of giving closer shave so less passes needed at least for me. One of the biggest tips I can give though is to let the razor do the work, very little if any pressure is needed imo. Again... just let the weight of the razor do the work.
E

So I have been looking into this Leaf Razor thing. Seems a solid piece of kit! And then the GF looking over my shoulder said... "Whats that" As I explained the concept she said "SOLD". Apparently she has been unhappy with her razor choices for a while but didn't realize there were options out there. And Leaf shave is apparently in Pittsburgh with me... though I don't seem to have any common connections with the founders despite a decent "maker community" following.


So apparently we are getting a leaf... Only problem is she found the limited edition "Prism" finish from earlier this year and now wants the rainbow one... Priorities. So now I get to wait for the limited edition to buy the first one to try it... and if I like it I'll go from there.

As for the Fat Boy, I may send it off to Phoenix. The guys at Razor Emporium seem to know what their doing and should treat it right. now to get it rhodium plated in the process and have it shine for another 50 years, hmm. The target brand $13 DE razor I bough for travel continues to slice me up... I haven't shaved in a while and tried it on my face... doesn't matter how gentle I am with the feather blades its three to four bleeders per shave. 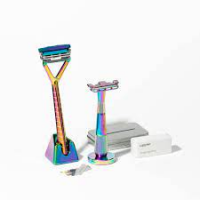 I use a Merkur open-comb for head-shaving (Merkur have several open-comb models all with the same head design). This is a very mild razor with negative blade exposure. Works really well for me. The open-comb means it can easily handle longer growth if you don't shave regularly.
E

Leaf and Twig came in and got to play with them a bit.

Leaf, She LOVES it for her legs. Didn't think it was doing anything until she felt how smooth her legs were. I tried it on the sides of my head(Mowhawk) its good at plowing through large areas but tough to get a tight line. It didn't seem to want to cut through my four day beard at all(grabbing and pull city).

Twig(simmilar on beard hair initial pass, tugging), Great for getting tight to my Mowhawk lines and GREAT as a finishing razor. After using my Fat Boy to cut off most of the growth I grabbed the Twig and did my finishing passes. For that task it was amazing! I was able to cut against the grain across the grain with ease. It just wasn't aggressive enough to knock off the mm or two of initial growth.
Last edited: Sep 11, 2021
E

Our set. Might get me a leaf so I don't have to keep using hers to plow through the sides of my head

I used cartridge razors on my head for decades, then went to DE with mixed results- though I got better with time. Recently went with a RazoRock Hawk v3, which uses a single edge blade. I haven’t mastered it yet, but it seems like it is going to be a keeper. My main issue is that it seems to clog up if I’ve gone a few days. I really like the stiffness of the blade- I’m using Kai pinks. My newest razor is a Vector Ti - but I haven’t used it yet for head shaving- scared I’ll drop it in the shower.
You must log in or register to reply here.

How To Get The Best Performance From A Light Weight Razor?
2