I often carry my LCR in my front strong side (obviously) pocket sans holster, but I have a nice high riding holster for it that I usually use.

It’s definitely all in the details isn’t it?

You have shown us like 10 different pocket pistols. Are there any more specific hat you have OTHER than your FN that will beat the LCP day n width and weight? Just curious.

jar_ said:
While I own handguns in most of the normal calibers and strongly believe caliber war assertions are simply stupid and that handgun self defense is just like real estate; the three most important factors are location, Location, LOCATION; this topic was intended to address the question of whether there were any handguns that a member felt comfortable pocket carrying without a holster.

I presented two examples that I am perfectly satisfied could be pocket carried even without a holster. There are a few others where I think are somewhat borderline.

Again, from Beretta, there is the Tomcat and Bobcat. They are both small and kinda funny shaped so in a pocket without a holster they do not print as "GUN" but rather mostly as a "kinda round something". They are traditional DA/SA with a very heavy DA trigger and also a very positive manual safety.

Granted, that is one less layer of prevention from an ND than the two above.

While the pistols above are either 32acp or 22LR both Beretta and Taurus made 25acp versions that are still generally available.

The common factor to all of these is their small size, small enough to sit securely in one position at the bottom of a pants pocket. They do not tend to move around and so allow a consistent presentation. They are also small enough to not appear as "GUN".

There have been many such Pocket Pistols over the decades and until the late 1960s were pretty much de rigueur. They ranged from really cheap junk to finely crafted and engineered masterpieces. Some examples were the Colt 1908 Vest Pocket that was the same design as the FN 1906 shown in my earlier post and the designs based on the even smaller Baby Browning and the later series from Astra (200, 400, Firecat) that was also sold as the Colt Junior.

OkieStubble said:
It’s definitely all in the details isn’t it?

You have shown us like 10 different pocket pistols. Are there any more specific hat you have OTHER than your FN that will beat the LCP day n width and weight? Just curious.
Click to expand...

Well, yes. The Beretta 1919 for one. And it too has the extra layer of safety to make this old fart feel secure. It's even slimmer than the FN but has the grip and manual safety. Honestly, the LCP almost never gets to go WalkAbout and I shudder to imagine carrying it without a holster. The Beretta Bobcat, Tomcat and Taurus PT-22 Poly as smaller than the LCP but wider and they do have the advantage of a manual safety and a heavier DA trigger pull so they also get out far more often than the LCP.

Also another Beretta, the Beretta Pico is smaller and slimmer than the LCP and in the same caliber but with real honestly usable sights.

From most carried to least carried...

Colt Cobra .38 Special. To keep the hammer from snagging I simply put my thumb over the hammer spur during the draw and it acts like a shroud.

Ortgies .32 ACP that Dad brought back from the War. Empty chamber though.

Davis Industries .380 ACP that SWMBO brought home from work when someone left it in a hotel room and never came back to claim it. Never shot it...kinda scared to. Never carried it.

I also have a Walther PPK/s I really like; but it's HEAVY for pocket carry IMHO. Really well made and shoots well.

Hey jar_, I almost got the Pico. I still may get one yet. Goofy looking, but ergonomically superior to the Ruger. The Ruger is some what snappy w/o the "glove". I did paint the front sight post on the LCP II orange and it works well.

FarmerTan said:
Man, I shot mine today, and a cool dude let me touch his little Colt. I'll try to post a pic if'n y'all want to see 'em....
Click to expand...

The sights on the Pico are huge!

It was a Stratocaster with a whammy bar!

Acmemfg said:
Though not my first choice (or second or third) for defensive weaponry, the .380 is better than a poke in the eye with a sharp stick.
I prefer my S&W if I m going the pocket carry route...which is very seldom..
As far as the .380 being a competent defensive round. I think there are better choices, but there are plenty of documented cases where a .380 proved to be as lethal as necessary. View attachment 1037485 View attachment 1037486
Click to expand...

Where did you get the holster for the Ruger Tim? I would love a good leather pocket holster for my LCP II

Acmemfg said:
As far as the .380 being a competent defensive round. I think there are better choices, but there are plenty of documented cases where a .380 proved to be as lethal as necessary.
Click to expand...

The Brothers in the 'hood been killin' each other with 'em for decades. I've seen it.

Ambassador
Ritchie Leather, Buffalo NY.
These guys make a great holster. I have been happy with this and other holsters they have made for me.

I have two Desantis Nemesis pocket holsters....one for my Glock 43 and one for my S&W 642.

They work great, exactly like they’re supposed to. The gun comes out of the pocket quickly and easily, and the holster stays in. I’m too chicken to pocket carry naked, with no holster. 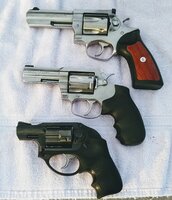 His is in the middle. Sweet trigger.

Ambassador
Those Colts are nice. I'm hoping the Python does not take too long to show up on the horizon.

Sent from my LG-LS998 using Tapatalk

Sent from my LG-LS998 using Tapatalk
Click to expand...


But I doubt it will make it so!


The trigger on my young friend's is worth half that price, lol.

Contributor
KelTec .32 in the front pocket of my jeans or shorts....Religiously! I can get a firing grip while in my pocket with no printing, or attention paid to the old guy with his hands in his pockets. In warmer weather, this is backed up by a Smith 638 either in a fanny pack or coat pocket pocket in cold weather. Totally safe.
You must log in or register to reply here.
Share:
Facebook Twitter Reddit Pinterest Tumblr WhatsApp Email Link
Top Bottom