This is wrong on so many levels

A kind soul brought two dozen doughnuts into work this morning. By the time I got to them, the last chocolate doughnut looked like this. I ask you - who cuts out 1/8th of a doughnut and leaves the rest behind? 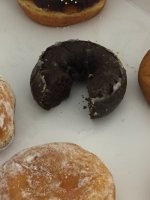 In what kind of America are these things allowed to happen?


Sorry. It's a theme today.

(Goes back to sharpening pitchforks)

We get that in my office, too. One must assume that the person that does that was raised by feral animals.
Yes, I get the "but I didn't touch it with my hands/ used a knife" but still, take the whole thing or don't touch it. Eat it, or don't, but if you touch it, take it. There's no room in a normal world for a donut-mangler. Who doesn't eat a whole donut? You either don't want one, or you do. There is no room for half-a-donut thinking. And the most egregious offender of all is the person that sees an already-cut donut and won't take their stupid "just a piece" out of that, but will defile another whole donut. If I ever saw somebody that worked for me doing that, I'd have to fire them.


You may be able to guess that I'm very passionate about baked (and fried) goods!

Hmm, let me zee...you do not zeem to have a problem vit the hole being missing out of zee middle of zee donut. Und zee hole iz almost zee very zame zize as de missing piece of zee donut. Vat is zo zpecial about zat missing slice that cause you such obsession, und such lamentation about zee loss of dis teensy slice of donut?

I am tinking dat perhaps you lost your teddy bear ven you vere a young child, und ze trrrrrauma of ze loss has now manifested itself in little daily upsets such as the missing slice of donut.

Please arrrrrrange vit my secretary to come in for veekly vists to discuss did psychosis....

Und pay no attention to dat cigar I am holding in my hand....zometimes a cigar iz just a cigar....

this whole emotional outrage is to simply cover up the fact that the complainer is actually an industrial spy and they have to cover their donkey because the opposition got there first. case solved

ANIMALS, NOTHING BUT ANIMALS!!

Time to roam the office and look for chocolate crumbs on lapels.

Moderator Emeritus
My friend Sully just had a "rage stroke" post on Facebook about this the other day. Apparently people are watching their waistlines or just want "a little taste"

the_edski said:
My friend Sully just had a "rage stroke" post on Facebook about this the other day. Apparently people are watching their waistlines or just want "a little taste"
Click to expand...

Also, some people are Evil and need to be hunted down

You folks are pretty strict about where the hole goes in your donuts.

It was me. I actually took 1/8 of 8 different doughnuts, so I could make a sampler doughnut . Seven other people didn't seem to mind.

Moderator
Contributor
The person who cut that piece out is on a diet. The person tells their friends that they are on a strict diet but they haven't lost anything. If you cut out 1/8 pieces 8 times that's a whole lot of cheating.

Hard to do with beignets...

You should create a donut lineup to find the culprit. Think Seinfeld.
You must log in or register to reply here.

For New Shavers, the JCinPA's How to Get Off to a Right Start Guide!
2

Some Pointers for those with very sensitive skin...from someone who has tried way too many.