"Recently, one of the best motorcycle museums around, Wheels Through Time, showed off an amazing acquisition: the 9-Wheel Harley Rig. That’s right, it’s a Harley-Davidson with a cab of sorts built around it, four wheels behind the front wheel, plus a trailer with another four wheels at the rear. Plus, there are dual smokestacks and other finishes to make it look like a mini-semi, if such a thing were to exist. This thing has been famous for some time, but even if you’ve seen it before you might not know much about its origins.

Back in 1989, Kenny Kilpatrick and his wife Jane had a dream: to build a Harley-powered rig. The couple, who lived in Alabama, fabricated what would become the 9-Wheel Harley Rig, finishing the job in 1990. As you might imagine, the thing immediately turned plenty of heads and got people talking. Kilpatrick got the blessing of Harley-Davidson to use the company’s iconic logos on the cab and trailer. That was a smart move some companies would’ve torpedoed out of some uptight fear of the unknown. Instead, Harley let this incredibly unique machine become a rolling billboard for its brand, which seems to have worked out well.

Not only did Harley allow its logo to be used on the 9-Wheel Harley Rig, the company sponsored the build by donating the engine. Dunlop got involved as a sponsor by donating the wheels. Considering how many people gawked at this one-off, these sponsorships were wise.

In the trailer is a living space. There is a bench seat to sit back and relax, framed photos on the wood-paneled walls, mirrors, cabinetry, TV with VCR, and a full-sized bed. Kilpatrick even had the foresight to install mirrored skylights which are smoked so they blend into the exterior but on the inside let in plenty of light during the daytime. [Sweeeeeet!] In its time, the 9-Wheel Harley Rig has certainly gotten around. It toured the continental United States and has also been as far as Germany, wowing crowds who have never seen anything like it before. The creation was entered into multiple shows, snagging a number of first-place prizes. Life changes and what was once beloved can become a burden. Kenny Kilpatrick fell ill and eventually died earlier in 2021. He had previously visited Wheels Through Time and really hit it off with the owner. As a result, his dying wish was for his creation to be preserved at the motorcycle museum, a wish his widow saw fit to have fulfilled [Bravo...well done!]. 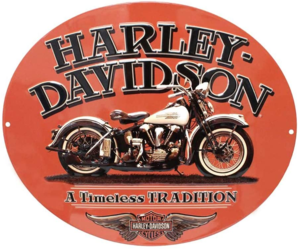 Cosmetically, this one-off motorcycle rig is in fantastic shape. However, there are some issues with the electrical wiring, transmission, brakes, and the engine. Considering the kind of work this museum has done on rare, vintage motorcycles throughout the years, getting this thing running correctly down to the smallest detail is a certainty.

Displayed at Wheels Through Time, anyone who visits will be able to get a closer look at the unique creation and gain an even greater appreciation for what it represents. Plus, future generations can be wowed by the ingenuity and attention to detail left behind by Kenny Kilpatrick".

Thanks for sharing this with us my friend. They sound like they were a great couple.
C

I saw one of those old trailers going down the interstate this week. I guess you could call it decommissioned. It still had the stripes, but the Harley Davidson decals had been removed.

20+ years ago, we went out of our way to try and get our pic taken in front of one of those rigs at bike week.

If you have never visited Wheels Though Time, it is worth the trip. I have a T-shirt from a visit somewhere around my house.
You must log in or register to reply here.