Well, I feel like a quitter for not dragging the original blade the last three shaves, it could have made it. Regardless this really helped me solidify my technique and I commend all those who participated. Another result of this challenge is that I got to take a blade farther than I ever had before, so I guess that is a win.

Today's shave was a two and a half pass BBS.

On a side note, the Best knot in this decade old "chubby" rivals any of the Super knots I have or tried.
Click to expand...

I know the pain of 3 shaves on a new blade

Last shave of the month...who else made it all the way?

Two passes for pretty much the shave that this blade, at this stage, provides. Merely okay.

Twenty-seven shaves on the Racer Super Stainless. No stropping, no flipping, no taking out and cleansing in alcohol, no blade gymnastics at all. I only touched the blade to move it to another razor. Looking back, I complained about the lack of closeness on the first shave; it's my complaint now. The Racer, by Lord, is an average if not slightly below average blade. But kudos for not causing any irritation.

Prep is everything. Tool is important too. The Racer performed better as I climbed the ladder of aggression. Meh performance in a mild razor, better in razors with more blade gap.

One thing I already knew, but this month just confirmed, is that the rate of blade degradation is slow and even, at least for me. I've read posts where a guy's blade has given up the ghost in mid shave. Shaves fine one day, doesn't the next. That's not my experience. There is no falling off the cliff when it comes to performance. A great blade slowly gets less efficient, giving you a nice, smooth ride. A poor blade gets worse at the same rate, you just get to your destination sooner.

No one in in their right mind would put another shave on this blade, but I am going to use it one more time to make up for the day I missed. It's a 28-day month, I want 28 shaves. Probably 30. I'm not in my right mind and am OCD to boot since I want an even number.

All done. 21 shaves on the Nacet, and I'll carry it into the FFFMM with me.

Thank you @Mike M for starting this thread and thanks to all participants who provided positive comments, contributions, and support. This has been my most comfortable and trouble-free OBiF challenge to date. The blade has performed admirably and still has a few shaves remaining; I plan to continue using the razor and blade for the rest of the week. Simply amazing.

I had originally planned to use WTG-only shaves in an effort to extend the life of the blade. That proved to lead to unsatisfactory results and the plan was abandoned after only one day. The plan also proved to be totally unnecessary as a return to my regular multi-pass routine provided some of the best shaves in recent memory. This razor/blade combination is a definite winner.

Annnnd...done! I finished up with the MicroMatic, just because it's Monday. It actually gave me a good shave with this well worn blade. I don't think I would use one of these drug store blades for this long very often. Still, this challenge certainly helped me up my game with regard to SE shaving. I count that as a win.

Congratulations to all who made it through to the end, and to all those who made the attempt! Accepting the challenge is all that counts. I hope you all had fun. I know I did! [Since I can't edit my previous post, I will quote myself below.]

Some notes on my One Blade in February Challenge:

Background
Normally shave twice a week (Monday for the week and Friday for the weekend).
Always change my blade once a week (so normally I get two shaves per blade and use four blades in four weeks).
Have found that I get better shaves when my stubble is longer (2-7days) as shaving every day is like shaving sandpaper.
Shaves are always one N-S pass (plus touch-up).

OBIF
In order to maximize my chances of successfully completing the challenge:
I shaved once a week for four weeks.
Did not buff blade on towel after each shave (only rinse and shake razor then let air dry).
Grew out my goatee (read: circle beard) for the first time in ten years.

Conclusions (TL;DR)
The KCG blades are very smooth (one of my favorite).
Could probably go two weeks per blade but four weeks is definitely pushing it. I did not change anything except my aftershave.
I only wanted to improve my technique with my King Cobra.
It is definitely not my daily driver, but it was for the whole month.

So I really learned that using Tabac helps if you use it fairly wet. I got much better performance with it that way.
Using the King Cobra daily actually helped teach me how to use Tabac better. And certainly educated me on how different a shave can be depending on how wet the shave is. I will now go into the FFFMM with a more open mind.

The Kai Titan Regular is hands down my favorite blade at this point. I used to swear by the Feather Pro but not any more. I honestly don't know which is sharper, really, but the Kai certainly has the Feather beat in the durability category. 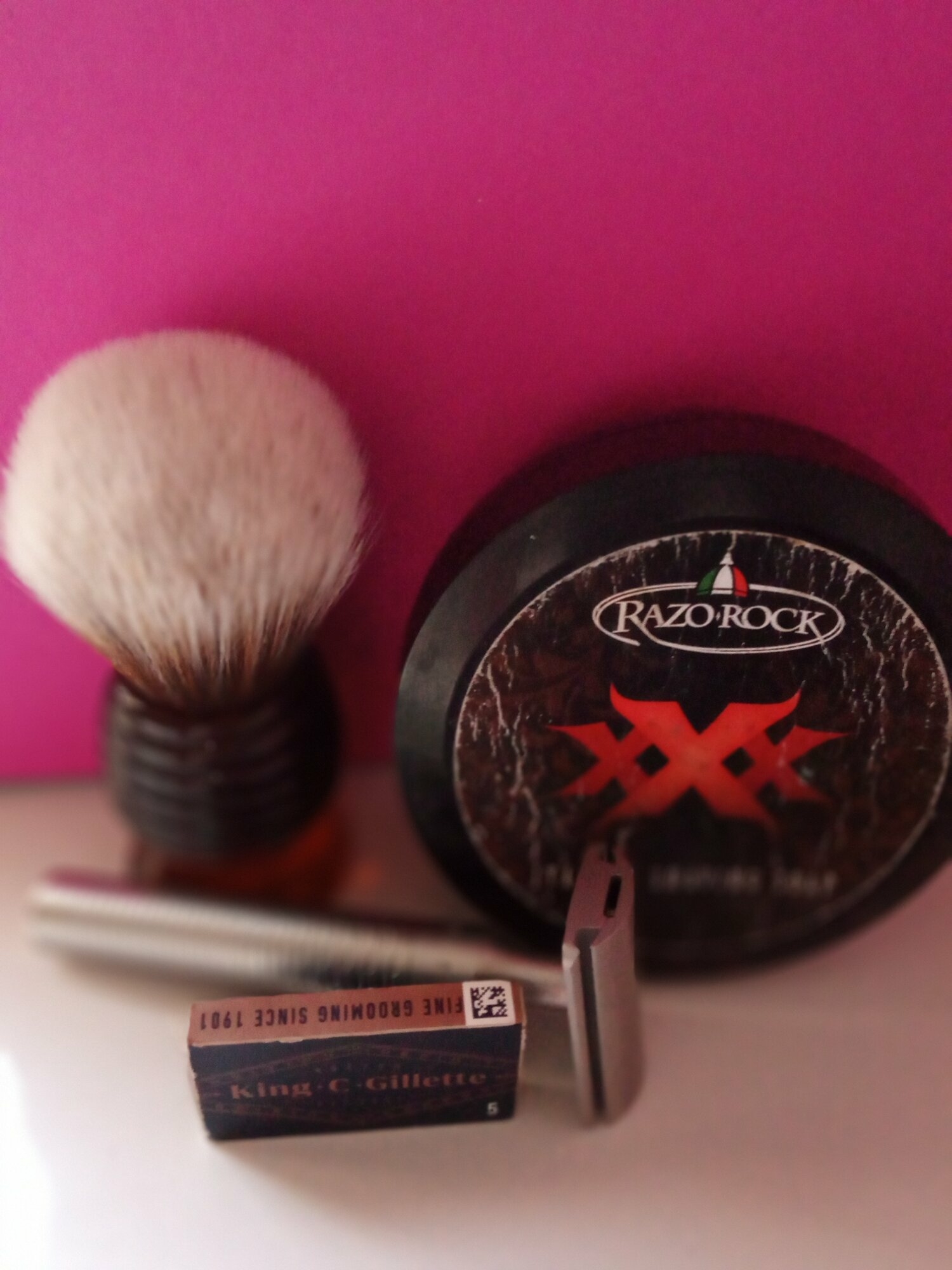 For the final shave of the One Blade February Challenge I used RR XXX after my success with Don Marco the other night.
The shave was great apart from the first lather being a little dry. Although there was a little tugging during the ATG pass it was still quite comfortable and left me with a near BBS. The KCG blade has been really comfortable and given a solid performance and given smooth trouble free shaves all month. This is definitely a great blade, but I am not sure I would pay the high retail price.
I made it through the month and the blade did not let me down and I have learned some about prolonging blade life.
I would like to thank everyone who has participated in the Thirteenth Annual One Blade in February Challenge regardless of whether you completed the challenge or not your participation makes the challenge what it is. It has been fun and I hope instructive and I look forward to next year's challenge. 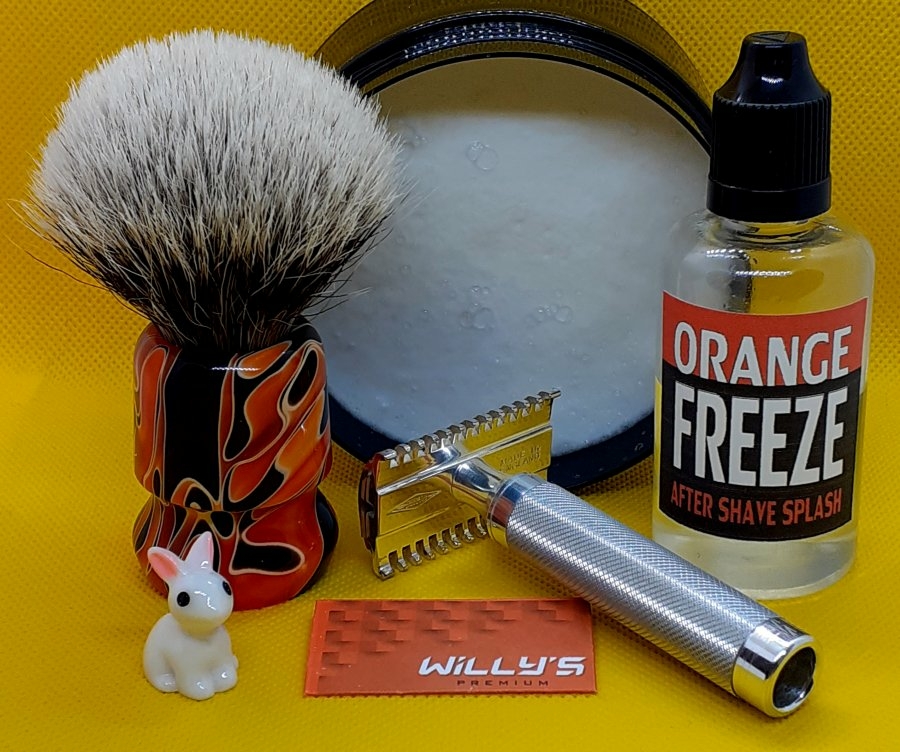 This Willy's blade was as good today as it was on its first shave. It's kinda weird that the first one started getting dull on shave 11. Anyway, that was my first two blade OBIF (usually just the one) and the first one IIRC where I've taken two days off.
Willy's blade 1: 12 shaves
Willy's blade 2: 14 shaves

The OBIFs are always great for technique sharpening. A BIG thank you to @Mike M for hosting it this year.

Started this blade in January. Five of those shaves were in February. I will leave the the blade in my Fatboy, since I am using a Vintage Gillette "Spoiler" in March.

30 shaves done with the Tiger Platinum blade, and it’s in the bin.

This was the last blade from a single tuck I got to try them out. The second last was utterly a dud, binned mid shave on its first shave. The others were nice enough, and I stretched this one to 30 without too much effort. Some tugging around the chin, especially in the last few days.

Bic, Personna Platinum, Lab blues are all just a bit better for me, and can go upwards of 50 shaves comfortably.

My discovery this month was the Schick Krona. It’s awesome, even with a not so sharp blade. I got the idea that it would be difficult to cut myself or even get a weeper with this razor. It just delivered great shaves even if I abandoned all technique.

Good job, everyone.
B

I finished the month and only used 1 Schick Plus Platinum.

This was an interesting challenge and now I can say I completed it.

Do not call me next year to participate this was a 1 time challenge I am going to go back to 3 shave and throw the blade away.

If Derby soap came in 12 packs, I'd buy it. It lathers very well. I think the razor's a Rocket, but I'd love it even if it isn't. Today, the Shark performed about the same as the last week: not real smooth on the first pass, but it gave me no trouble at all. Overall, I'd rate the shave DFS.

Looking back over the month: for me, there's always some trepidation starting a new blade. I actually prefer to get those first 2 or 3 shaves out of the way. Less likelihood of self harm

. I really didn't change my routine for the challenge: I shave daily; do two passes with touch-ups; and used the same hardware and software I usually do.

Tomorrow, in thinking of comparing this blade against a Shark with fewer (7? 10?) shaves on it. I think I have a couple of duplicate razors in my collection so that I won't have to change the blade during the shave.

And congratulations to all the others who made it through the challenge. A month's worth of shaves (a February's worth) on the Racer Super Stainless. Number 28 with the Futur. Should have used this earlier. Almost CCS in less than two passes. Yesterday was my last shave in Feb, #15 with the Feather blade, still smooth.
P

Still on the first edge, although the quality of the shave is declining, so maybe 60 shaves on this blade by the time I'm done with it in late April or May. A little "oversharp" to start, had to watch for weepers, and had to open up the Slim some by the end, but it still has a couple more shaves on this edge (26 total for the month, missed a couple Saturdays).

Nice blade. Dead average for me (63 shaves over 20 blades so far, sadly including a few really awful ones).

The One Blade in February is a great way to improve your shaves I think, and I certainly enjoy it.

TLDR: 35 shaves with one blade? Done

This was my final shave with this blade. While it seems capable of more, it has already proven itself and exceeded my expectations. And as much as I've enjoyed my first experience with the Schick Injector, I'm ready to get back to some of my other razors for a bit of variety.

If for some strange reason I ever decided to do a year-long fixed-four event, I think this razor/blade combo would work for me. I can honestly state that all of my shaves this month have been close, comfortable, and free of drama; I don't require anything beyond that.

Have a good shave today and a better one tomorrow...
You must log in or register to reply here.