The Nib Acquisitions for 2021.

Been enjoying this past week very much...
Click to expand...

So how do you like it now that you’ve had some time to use it? I really like my Metro.

I bought a couple of Platinum Preppy pens. A friend of mine has a white elephant Christmas party each year, and I thought I would give these as gifts. Introduce a couple friends to fountain pens. They were on sale for $4.80.

The three Platinum Preppies I ordered arrived today. I got one for myself (crystal, i.e. clear) with fine nib...comes with a black ink cartridge, and I got two to give away at a Christmas party. First time I ever bought gifts months in advance. One is blue with medium nib, and the other is black with fine nib. If the recipient of the blue pen inserts the cartridge and writes with it, I will see how a medium nib writes. (The three I now own are all fine nibs...Pilot Metro [for personal use], Pilot Petit1 Mini [for work], and now Platinum Preppy [also for work].)
G

Got these this week.

Sent from my SM-G991U using Tapatalk

I just received my new Pilot Custom 912 with a Waverly nib.
It looks great, I'm just wondering why mine didn't come with the little sticker with the nib size, like FA, or WA that I've seen on other Custom 912's.. 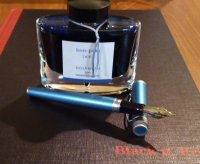 Fountain pen number four. This will be for personal use, not work. That gives me two pens for personal use (Pilot Metropolitan & this TWSBI Swipe) and two for work (Pilot Petit1 Mini & Platinum Preppy). This pen is extra fine. All my others are fine. I got Monteverde Horizon Blue ink. It’s lubricated, so that will be my first experience with an ink that’s not plain (or whatever the proper term is for an ink with nothing in it but dye). 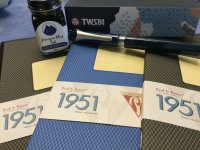 Dominic said:
Fountain pen number four. This will be for personal use, not work. That gives me two pens for personal use (Pilot Metropolitan & this TWSBI Swipe) and two for work (Pilot Petit1 Mini & Platinum Preppy). This pen is extra fine. All my others are fine. I got Monteverde Horizon Blue ink. It’s lubricated, so that will be my first experience with an ink that’s not plain (or whatever the proper term is for an ink with nothing in it but dye).

Looks like the ink goes everywhere. Perhaps that’s normal. I haven’t seen that in the Preppy or the Mini. The Metropolitan isn’t clear, so I don’t know what’s going on inside that one. 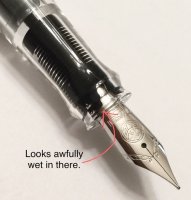 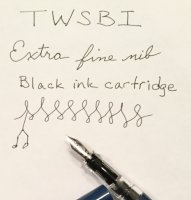 Comparison of the different pens.

A Lamy 2000 showed up today with a fine nib. Loaded with Namiki Blue. What a nice pen!

I want another M800, this one in stone garden with a medium or broad nib or another 823 in broad. These two are hands down my best pens and I’d like to add another of each.

Contributor
It's rare for me to have any pen related acquisitions. It's even rarer for those acquisitions to have an actual pen in them.

I suddenly decided I needed a bigger stash of cartridges last week, and put a little order in with CultPens. 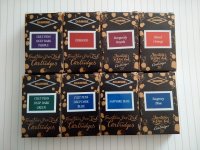 Shortly afterwards, straying thoughts and fleeting curiosity led me to a site called collectablepens in the UK, where I saw a '70s Parker 45 Flighter. I don't like the looks of the 51, but this one rather appealed to me. After a little research revealed it was cartridge/converter pen with an easily removable nib/feed, I ended up buying my first fountain pen that cost more than £10. It's also the only pre-owned pen I've ever owned. 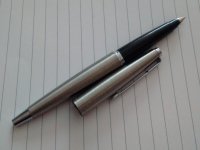 Although it did come with a cartridge, I figured I wouldn't get far with just that, and so went on the hunt for a converter for it. CultPens was out of stock, and I ended up at PenHeaven. They had converters, and I added a pack of the obligatory Quink blue-black cartridges. 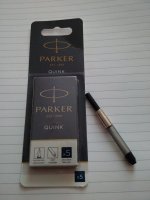 That left me well short of free shipping, until I got ambushed by a nicely textured, but hard to photograph, Parker IM Premium at 70% discount!!! 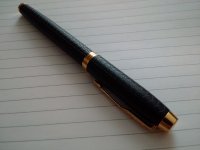 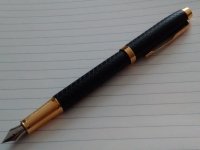 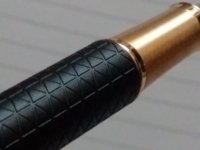 This one came already installed with a converter too, so I didn't have to double up.
Last edited: Sep 4, 2021

I hit a couple of antique malls yesterday, looking for pens (and safety razors). I found a nice Sheaffer NoNonsense for $5.00. As I was checking out, the sales clerk started asking me about fountain pens. I explained to her that I've been a collector for quite a few years and had over 100 pens in my collection. She asked me to wait for a minute and she went into the back room. She came out carrying a box containing two partially filled vintage ink bottles (Sheaffer Skrip Black and Waterman's Blue), two inexpensive Wearever pens (in excellent ready-to-write condition), and this gold Cross fountain pen. She gave the whole box to me, saying she got it from a friend, had no use for them, and wanted to give them to someone who would appreciate them. I didn't spend any time in the store examining them, fearing she might change her mind! I got them home and took a look at the Cross. It's an 18K gold-filled Cross Townsend with a medium 18K nib. Other than some micro-scratching, it's in great writeable condition. My $5.00 investment in a NoNonsense yielded an excellent return!