I discovered today, that this could be a good asset in soap management.

The last two soaps I used went bad before they were finished. I tend to stick with one soap till it's done, and exposing a soap to air and water almost every day for between 200 and 500 shaves (dependent on the soap), I suppose I shouldn't be overly surprised about the potential for it go bad before being used up.

Today was my first use of a soap sample I bought towards the end of last year. I'd pressed it into the bottom of a ramekin, to make it easier to load from. When I was loading up the brush for today's shave, I had a Eureka moment. There's plenty of room above the soap for lather building, the soap is going to get used up before it goes off, and the rest of the puck will be kept closed and dry in the drawer, less likely to spoil.

As I tend to mainly stick to one soap at a time, and don't like putting soaps away to fester after they've been in continual use for a while, this could also be a way of swapping soaps a little more frequently without fear of spoilage. Simply refill the empty ramekin with 15 to 20g of whatever soap I feel like using next, and return the rest of the puck that's never gotten wet, back to the drawer.

I don't know how much it would extend the life of some of the softer soaps that are more vulnerable to change, like Cella for example (working purely on hearsay, and never tried it), or one of the cold processed local craft soaps which I've accrued three pucks of, but it may be worth a try.

Yep. Works for me too. 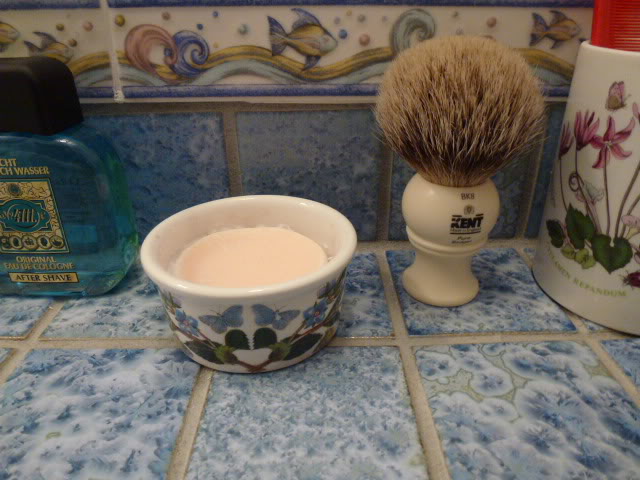 And you can get some pretty nice ramekins like @Mick, not just plain boring ones.
You must log in or register to reply here.

Yesterday at 10:17 AM
South Dakota Guy