Wow...this is some black ink...(good read too), need to get a bottle (any Nibsters here ever use this ink?).

"For decades, the idea that somebody can "own" a color has been a contentious one.

Painter Yves Klein registered a trademark for a shade of ultramarine called International Klein Blue in 1957, and jewelry brand Tiffany & Co.'s signature blue is also protected. More recently, in 2016 sculptor Anish Kapoor purchased the artistic rights to Vantablack, a material described as the "the darkest man-made substance." The substance is made of carbon nanotubes, that reflect virtually no light.

But Kapoor's exclusive license of Vantablack proved controversial, sparking a years-long feud with Stuart Semple, a British artist who has since set out to "liberate" colors from private ownership. Having created several of his own "coloriest colors," Semple then made them available to everyone in the world -- apart from Kapoor.

This month, his studio launched Blink, which is touted as the "blackest black ink" and is priced at just $16 a bottle. 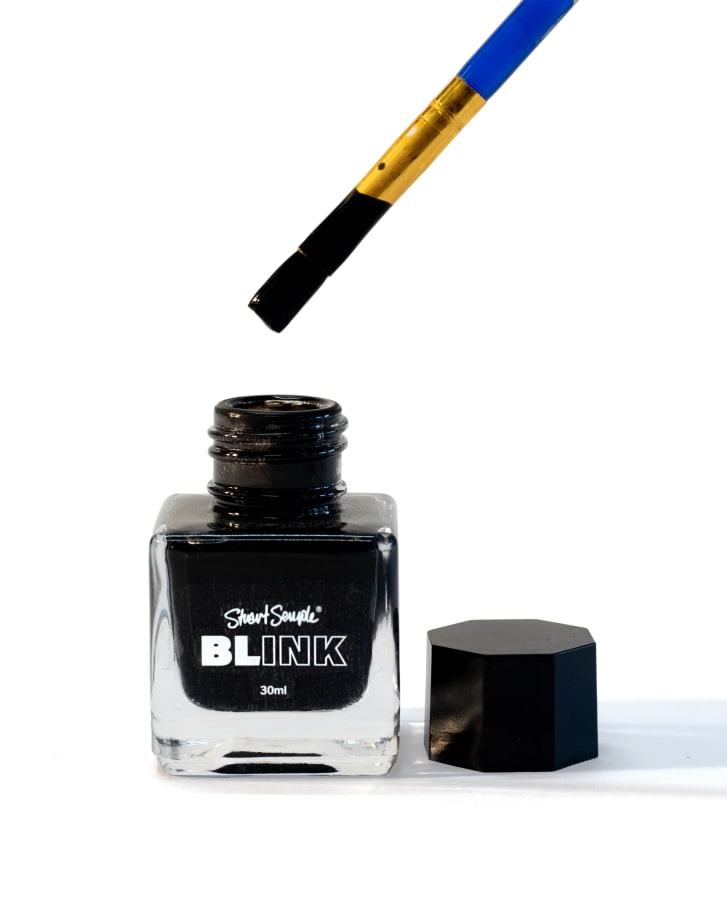 A comparison of Culture Hustle's 'Blink' to other black inks on the market.

"That's the whole point of liberating the colors. If we liberated them and then they were hideously expensive, it would defeat the whole object," Semple told CNN.

He has also developed a "blackest black paint in the world," to rival Vantablack.

Semple, who grew up making his own oil pastels because he couldn't afford art store prices, said that controlling who can use a certain color is "sad."

"That, to me at least, really is against the idea of sharing, generosity, community -- what art materials should be for," he added. "As human beings we have a right to express ourselves. It's basic freedom, and I think to do that we need the tools and materials."

It's a mantra that underpins Semple's studio, Culture Hustle, which sells exuberant art materials from the "glowiest glow" pigment to dust claiming to be the "most glittery glitter."

"I really don't think price or wealth should preclude you from expressing yourself," he said. One of Culture Hustle's best known products is a powdered paint dubbed the "world's pinkest pink," although the product description admits that the studio is "not actually sure" it's the brightest pink ever, just "the pinkest we could come up with, and we've not seen anything pinker."

Developed in direct response Kapoor's Vantablack deal, the product came with a notice prohibiting the British-Indian sculptor -- or anyone acting on his behalf -- from purchasing it. This move was itself an artwork, said Semple, who described the disclaimer as a "poem."

"The idea was if only one person can have Vantablack, what if everyone in the world can have the pink except that one person?" Semple said, adding he intended for the product "to raise a dialogue in a debate about ownership and elitism and privilege and access to the arts".

"I dip my pen in the blackest ink, because I'm not afraid of falling into my ink-pot". Ralph Waldo Emerson

@The Count of Merkur Cristo
M

Is this a promotional ad?

+1! My thoughts exactly. Dip pens only!

Marco63 said:
Is this a promotional ad?
Click to expand...

Count's an old timer. I doubt he's shilling for the ink. But I'm sure there was some (or more than some) payola behind the CNN piece, though.

Contributor
Vendor
This here is a ink for brushes or dip pens, but not for any kind of fountain pen - careful!!!!
I really like Noodlers Heart of Darkness for a black ink.

tankerjohn said:
Count's an old timer. I doubt he's shilling for the ink. But I'm sure there was some (or more than some) payola behind the CNN piece, though.
Click to expand...

John & nemo:
No compensation (against B & B rules), to me personally...thought it was a good piece, but after what you both said...this is a
'no-go' ink for FP's (I'll pass...obviously it seems that its viscosity is too thick).

"Ink is meditation in liquid form. So, don’t think it…...ink it”! CBJ
You must log in or register to reply here.

The Boom Is Over. Long Live Art!