This is something I think about often. I feel like it's something that previous generations "got" better than we do. I play guitar, and I own five of them, two amplifiers, and seven effects pedals. I got into guns less than a month ago and I already own two. When something interests me, I feel compelled to own a LOT of whatever it is. When I posted here years ago at the height of my wet shaving hobby, I owned around 65 - 70 razors, 10 - 12 brushes, and a mountain of soaps, creams, and aftershaves.

And then I think about people that I really look up to in my life. Primarily my grandfather. He was an intelligent WWII vet with broad interests and a true jack-of-all-trades guy like only that generation really can be. He owned one razor. He owned one rifle. He also played guitar, and he owned one acoustic guitar. Fishing was probably his greatest passion, and he did own five or six rods, but I can't think of another example of him going on an insane buying spree for any of his other interests.

I'm not necessarily condemning the way that I/we do things today. I love my guitar collection. But it does interest me that you just really don't see that same behavior from the previous generation. And I know the whole frugality from the Great Depression argument, but my grandfather was financially stable his entire adult life. He could've afforded a few indulgences.

What do you guys think? Anyone else notice this?

Yup . . . I think with our parents generation, it's a function of poverty (more recognizing how close it can be). So, you get a good quality razor and use it, saving money for when you "need it". You buy quality, even if it costs a bit more, in order to maximize value and longevity. With respect to "toys", you keep those to a minimum, again, to preserve assets against future need.

The generation who lived thru and experienced the Great Depression era, will be very frugal.
R

OkieStubble said:
The generation who lived thru and experienced the Great Depression era, will be very frugal.
Click to expand...

That is true in part. My parents grew up during the Great Depression and both served in WWII. They were typically frugal. During the Depression and War years some things were difficult to obtain, they might even have been rationed. Once I went through our storeroom and counted two dozen large cans of coffee. That was back before coffee cans were downsized like they are today. Thus, my mother had stockpiled something like 50 pounds of coffee. She remembered how it was when coffee was scarce and people were drinking "coffee" made from roasted chickory.

We had something similar early during the pandemic when people stockpiled enough toilet paper to last for months, fearing that it would not be obtainable.

If one is good, two must be better.

Moderator Emeritus
i am the worst for this. I always have ten of something that I only need one of and I always think about scaling back all the excess. But choosing is so hard...First world problem, I guess.

I think a good way of doing it is to buy once, cry once. A lot of my excess (apart from getting AD's) comes from trying to save money and getting the cheaper option, and later realising should have gotten the good one, and then buying that too.

My Dad's Dad was a High School Teacher in Detroit. He had one car. He taught night school classes on building split bamboo flyrods; he had dozens of them. He was also a woodworker & had seemingly endless duplicates of hand saws & chisels, but each & every one had a distinct purpose to a craftsman, so they were necessary. My Mom's Dad was a dirt farmer. He owned 3 tractors, plus an old plow that he sometimes used on the 5 acre family garden when the tractor was in use elsewhere; he was able to borrow mules from a neighbor.
My parents always had 2 cars, ever since Mom learned to drive in the early 1960's. Dad was a competitive shooter & owned a variety of pistols. Each had a specific purpose. He had several rifles, mostly inherited.
I have 2 cars, a motorcycle & a scooter & there's only me at home. I also have numerous rifles & handguns. only a few have specific uses. I have them because I could afford to buy them - same goes for shaving equipment, both DE's and straights.
As time permits, I use them all. On occasion, I'll sell a rifle or handgun, or a razor. They appreciate in value better than bank interest, so they're a tiny part of my retirement fund.

My Mom's Dad had several tractors. he also liked to fish and during the Depression, caught meals for the family. Although he had a shotgun, rifle and BB gun, he only had a couple of bamboo poles, some spools of fishing line and some hooks. He never considered that it was necessary to have anything any 'fancier'.

I guess the moral of the story is that economics plays a big part in the number of 'things' we accumulate and occasionally the necessity of doing so. I have 4-5 fishing rods, each for a specific purpose. Friends have more, usually "because they can".

I also have 3 telephones (and a cell). I grew up in a household where the one phone was attached to the wall in the kitchen. Until later years, my parents only had a single household phone - it was all that was necessary.

My Dad was like that with many things. One winter coat (which he almost always wore unzipped). One pair of shoes. My mom had to fight tooth and nail to get him a 2cd pair of shoes so that when his were at the shoemaker being re-soled he had a pair to wear.

ShaverAZ said:
I grew up in a household where the one phone was attached to the wall in the kitchen.
Click to expand...

Our house had 1 in the kitchen and 1 in the basement like that.

Moderator Emeritus
"One is none; two is one".

Maybe the Depression and two wars, TV and internet have made people realise life can be short and unpredictable, so why not get to it while we can.

Ambassador
All you have to do is drive through any suburban neighborhood on a Saturday afternoon and look at all the garages with the doors open and see how stuffed to the ceiling with junk they are to answer your question. We live in a buy now think later society.
I am of the view that if something like a hobby brings joy to your life then buy whatever you like. We are only going this way once.
My parents were depression era kids and I saw how the deprivation they experienced affected them their whole lives. It must have been a terrible time to have left such a lasting impression. 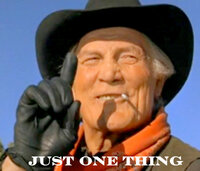 Jack Palance now there's a face from the past.

Two is the loneliest number except for one.

In my ever ongoing minimalist endeavor, I've done this much...
All my music is on a couple of zip drives, no albums, tapes, CD's etc..
I've found homes for my library of books and got a Kindle.
I have it down to 3 main guitars, Martin for rhythm, Gretsch for lead, and a Parlor Gretsch as a beater and campfire guitar. (plus a mandolin)
One of everything I need. Cutlery, dishes, etc..
Less stuff and less responsibility means more money and more time. Besides, the way the world is going this year, I need time more than I ever did, and I got a feeling that money is going to come in very handy, very soon.