After deciding my short mug was better suited for face lathering, I started looking at another shaving mug. Now, I already have an apothecary style mug with VDH soap in it, but I like keeping soaps in rotation. Rather than spend money on another, I decided to look for a large mug. The last time I did this, I didn't find one with the right bottom for holding shaving soap. Ah, but it wasn't in the last quarter of the year. Now, there's all sorts of knick-knacks on the shelves, and some of them are oversized mugs.

No, I didn't end up with a Christmas mug. I did first pick a "cutesy" saying mug because it was the most tolerable and looked like it could hold shaving soap. Unfortunately, I'm not a "cutesy" person first thing in the morning, and this cup was barely tolerable in the evening. But into the buggy it went.

From there, I ended up in a Christmas aisle, and there a family member saw it: A large stoneware mug that looked even bigger than the one in the cart. Into the cart the stoneware mug went. Back on the shelf went the "cutesy" mug.

Once I got home and washed it, I found it was a 21.5 ounce mug. That's nearly 640 ml. Don't know the capacity of the apothecary mug, but this thing looks like it could hold more. The only possible drawback is that it's so tall that it might be hard to use the brush, but I think the larger diameter will offset that. It really looks about the proportions of the late 19th Century barber shop shaving mugs.

Removed the Williams from the short mug (a 1970s style Old Spice I bought back in the day), discovered, to my surprise, the puck was now soft, and put it in the stoneware mug.

First shave will be in the morning. It will be interesting to see how well this works.

Must agree with you: the old OS mugs are great!!!

If this mug does not work well, then you can try adding a second puck on top of the first. You might also consider a ramekin from the kitchen section.

Immediately discovered that the mug is a tad too tall for this handle shape. Also noted that the lather climbed no more than about halfway up the sides.

The lather making was interesting. Likely could have had the same results in an apothecary type shaving mug. I was able to build a better lather with Williams than I have in the past simply by "going back over" the lather as I added water. This is what I suspected after using Williams in my short mug. Think I could have spent a little more time and added a little more water and gotten a truly great lather out of it.

The puck stayed mostly in place until I rinsed out the lather. Williams Shaving Soap has a concave shape on the bottom, which might be to provide a suction cup effect to the bottom of the mug. Wetting the puck and pressing it in place kept it there.

I look forward to trying this mug with a vase shape handle. I think that will put my fingers just far enough out of the mug that I can use it better. I have size 10 1/2 hands and that might be part of the difficulty. OTOH, the the diameter of the mug is large enough that I could still build a lather, and could fit a VDH Luxury puck in it. VDH Luxury pucks seem sized and shaped to fit in an apothecary mug.

Apothecary mugs aren't "period," but are maybe tall enough for what I wanted to do with Williams. The shape is better suited for a brush than what I used this morning. OTOH, they cost more than $3.00 US, and a regular mug does work.

The next time I use it, it will be with a vase shaped brush. And we will see what we will see.

Old Old Spice mugs are my favorite too. I prefer a mug that has sides only 1 or 2 inches taller than the soap. I've done alright at Goodwill. IMO, today's mugs are oversized for the person that wants 20 - 30 ounces of coffee at a time. I bought some cups like grandma would have used. Dainty things with short sides. They work great and were $1 a peice.

Rather than use my other boar brush, I used my go-to brush, a Fine angel hair. This one is made on the order of the old Eveready C40, with the "grip" groove near the base in a sort-of vase shape. Filled the mug with hot water for a warm shave, and soaked the brush for the same purpose. The brush is synthetic and the bristles don't absorb water, so soaking does no good for it; I just wanted it warm. After washing my face in hot water, I poured the water from the mug, but didn't shake the brush like I usually do.

Once again it was clear that the mug is too tall. My fingers were out of the way more, but while making the lather, the base of the brush was below the rim. I did end up making the best lather I ever have with Williams, but that was likely due to the extra water and keeping the lather in the mug. Still, the lather never came close to the top, so a shorter mug would do.

Briefly considered buying a brush with a long handle, which would be a good case of spending $30 to save $3. That would defeat the entire purpose of buying the mug in the first place.

I don't want to declare this experiment a failure, but the mug isn't going to magically get shorter. I could tinker with it, but again, that would defeat the initial purpose. The good to come out of it is that later today, I can measure the soap residue to see how high the lather came, measure the diameter, then calculate the volume of lather. I'm thinking that would give me an idea of the "ideal" mug. Except for soup mugs, a shorter mug will have a smaller diameter, so like my 1970s Old Spice mug, could end up being too short.

Or I could just get another apothecary mug. That defeats the purpose, too, but the top is flared, which makes brush use easier.

Make the mug magically shorter. Create a false bottom in it. Some sculpy, paraffin wax, silicone, or a disc(s) of plastic or wood to raise the bottom.

Yes, and add to expense. Paraffin wax would be the least hard to remove, but require a double boiler, which we don't have. Not sure I could rig one, and not sure how my wife would take me rigging with her cookware. Do not want to try it in the microwave. But pouring paraffin in it is very tempting.

To determine the volume of lather, I simply filled the mug with water to the stop of the soap residue, and poured it into a measuring cup. Because the puck is now soft, I estimated the volume by holding a ruler over it and measuring the height. Since the measuring cup isn't as precise as I'd like, it's all an estimate. I came up with about 270 ml + about 40 ml for the puck for a total of about 310 ml, which is about 10 and a half ounces. I did measure the height of the soap residue, and came up with about 1 5/8" (4.1275 cm) above the puck.

This means about 330 ml is unused, but it would be good to have a space above the lather.

@Raissermesser Silicone caulk, or there is a product called Durham's Rock Hard Water Putty is cheap and would do the trick nicely.

A few months ago, I purchased this enameled metal mug at a nearby Hobby Lobby for my shaving mug. It works very well for me. 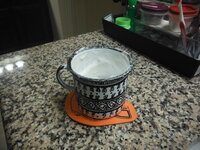 BobbyB said:
A few months ago, I purchased this enameled metal mug at a nearby Hobby Lobby for my shaving mug. It works very well for me.

Armed with information gained from the 21.5 ounce mug, I took a second look in the kitchen cabinets. I have some freebee mugs that I dismissed as too small, but it turned out a few were the right size. I chose a Hughes Supply mug because it wasn't "loud" to look at in the morning (sorry, Cintas). The puck fit with a little room to spare. A larger puck, like VDH luxury soap, could fit in it, but it's not as large as the stoneware mug.

As for the 21.5 ounce mug, I washed the shaving soap out and it's now in the dishwasher. Yeah, it's overkill, but I didn't want to use it this winter and have a shaving soap aftertaste.

Raissermesser said:
Armed with information gained from the 21.5 ounce mug, I took a second look in the kitchen cabinets. I have some freebee mugs that I dismissed as too small, but it turned out a few were the right size. I chose a Hughes Supply mug because it wasn't "loud" to look at in the morning (sorry, Cintas). The puck fit with a little room to spare. A larger puck, like VDH luxury soap, could fit in it, but it's not as large as the stoneware mug.

As for the 21.5 ounce mug, I washed the shaving soap out and it's now in the dishwasher. Yeah, it's overkill, but I didn't want to use it this winter and have a shaving soap aftertaste.
Click to expand...

Unfortunately, it's still a tad too tall, and the smaller diameter once again meant my hand got in the way. I might be stuck using apothecary type mugs. At least I didn't have to spend money on a second failed experiment. If I ever run up on a 1950s-1960s Old Spice mug, I'll measure it and see how it compares.

OTOH, once again got long lasting lather out of Williams.