Contributor
So Tanuki is doing some edge testing of user/ugly razors for me.

First round ended and one razor was a clear loser. It has been removed from the competition and will be PIF'ed to a random winner with a US shipping address who posts "I'm in" and their preferred finish for the razor if they win (list below) in this thread between now and 9/20.

Tanuki was even nice enough to tighten the scales for you.


If you want in and have a US mailing address, you've got a little more than 3 days from now to post in this thread saying that you're in. I'll pick a winner at random on 9/20 and PM you for your address. Then I'll finish it as requested and mail it to you. 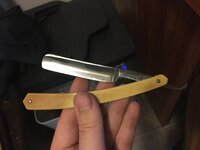 I’m in. Thanks for the opportunity!
S

I’m in thank you so much.

Why no love for the ILR?

Contributor
I don't have one.

Ok—I’m in. And since you said we should list preferred finish I’ll say coticule.
J

I’m in. Thanks for your generosity. Coticle please.

Not in, happy with what I've got, but

for being so generous

Great pif very generous. I need to get my self aeound and put together a pif. I love the idea.

I’m in. Thanks for the opportunity. Coticle please.


AzBronco, PM me your address. I'll finish it on a coticule and mail it out to you.


Thanks to everyone for participating and better luck next time.

Congrats @AZBronco! Great PIF @SliceOfLife and thank you for the opportunity!

Wow—thanks for this! I’ve been using my straight more lately so I look forward to shaving with this one.

Congrats Let us know how she performs!

I received the ugly razor earlier this week--and it seems to me @SliceOfLife took a pretty good picture because the razor doesn't look quite as good in person!

When I got the package, my wife watched over my shoulder to see what it was. I took it out and there were what looked like visible defects on the edge. She immediately told me I wasn't allowed to shave with it... Anyway, it's Sunday morning and she's sleeping in, so I pulled out my jewelers loop to take a closer look at the edge. There were no imperfections, all we were seeing were some tiny left over shavings from the honing. I wiped the blade and gave it a few passes on a strop, checked the edge again and everything looked good. After sanitizing the blade I decided to use a little metal polish to clean it up a bit before shaving.

So the real question is not how it looks, but how it shaves. After a hot shower, I lathered up Captain's Choice Nor'Easter cream. The razor edge was fine (I asked for it to be honed on the coticule). There was a little tugging, but I didn't shave yesterday so the growth was pretty thick. The blade did a great job removing 2 days of growth, though.

In the original thread, this razor was deemed by @Tanuki to be a distant fourth out of four, with one of the main complaints being handling. The razor is thin and very light, which creates a little challenge. However, I have a couple of 4/8 razors and my Feather AC is also thin, so I adapted quickly. I'm sure the razor being newly honed also helped greatly. The end result was average for me--not the best shave I've ever had but nowhere close to the worst shave either. I'll play with the razor a couple more times, but I'd like to PIF it to someone else who expressed interest as a way to share the joy of this fine specimen.

For those who were part of the original PIF--let me know if you're still in and I'll randomly pick someone to pass it along to (I'll ship CONUS only, unless any of you outside the US are willing to help cover international shipping).