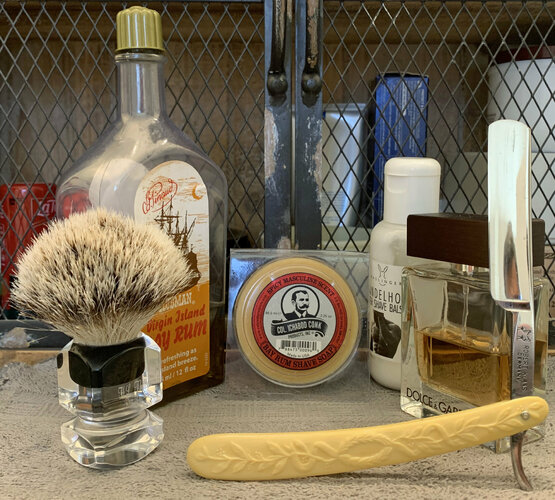 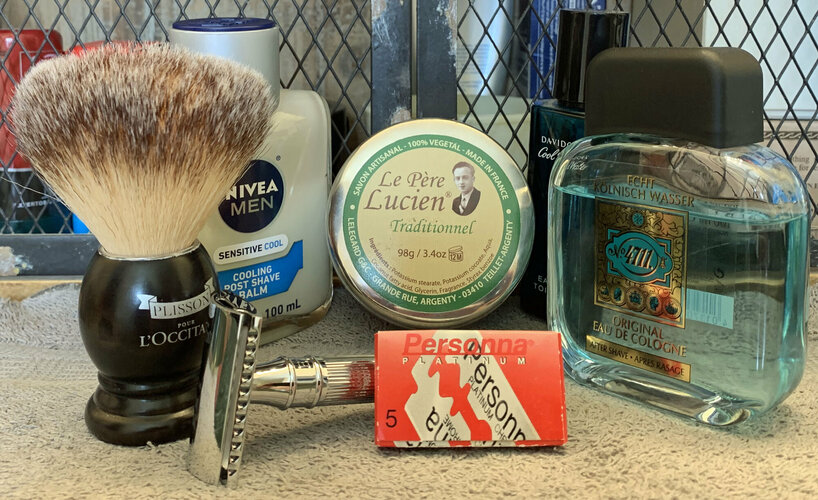 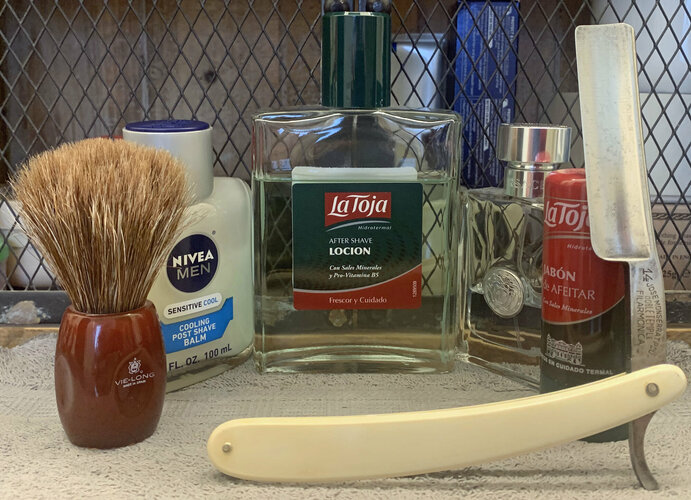 A little bit of Italy on this most American of holidays. 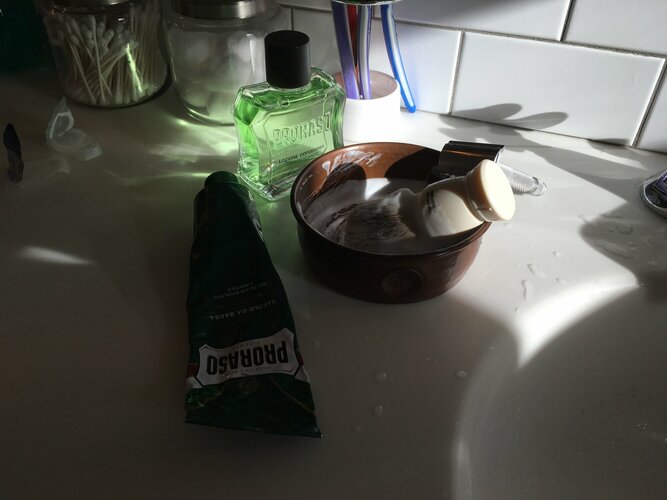 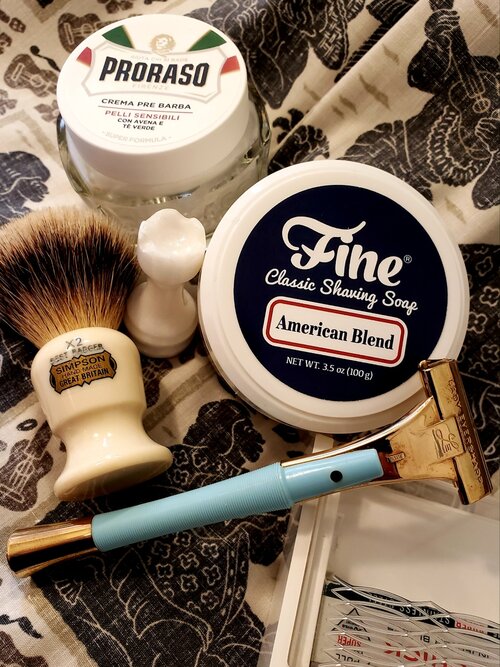 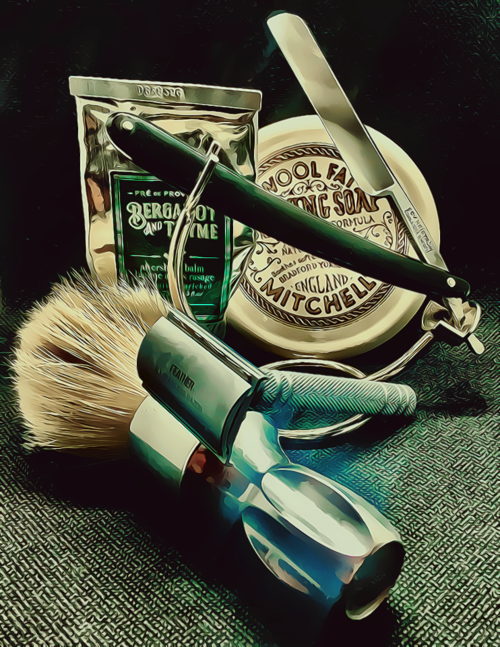 Arrived in Las Vegas yesterday for Thanksgiving with the in-laws. After my great mug shave with the CV Heljestrand 4/8, it was time for another Swedish 4/8 foray, this time with the Edv. Neistrom #52 4/8. And no folks, it’s not a fluke! These little Swedish 4/8 razors punch way above their weight class. I think it’s the incredible nimbleness and maneuverability that I really like about these razors. They feel great in hand, and that Swedish silver steel holds a lovely edge. Two and a 1/2 passes sheared away all my mug stubble and left me very smooth.

Feather Safety Razor was allegedly started by two German WWI expatriots who stayed on in Japan after their release. Since non-Japanese were prohibited from owning property, their agent, a man named Toshio Kosaka represented the company. The company emulated the Gillette model with a focus on razor blades. After WWII the company’s share of the market dropped from a commanding 72% share to less than 5% in Japan. They dominate in Japan in DE blades and professional barber’s razors.

They were also one of, if not the first to offer a SS CNC manufactured safety razor in the AS-D1, to provide a platform for their hyper sharp Feather DE blade. Unfortunately, that initial model was a bit too protective and the razor failed to provide a truly close shave. Those initial design errors were remedied in the AS-D2 which is an immensely efficient shaver once the owner masters it’s rather narrow sweet spot, as it demonstrated in completing my noggin shave, leaving me velveteen smooth from dome toshoulders!

I wish all my shave brothers and sisters out there a glorious Thanksgiving! Don’t overeat too much! 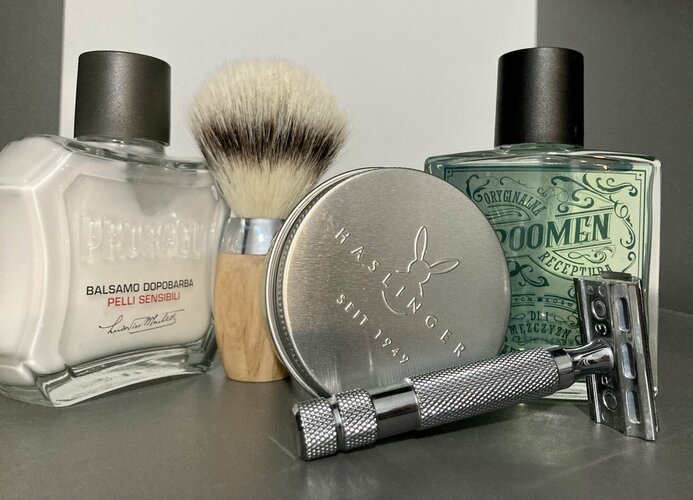 Contributor
Thanksgiving shave was very good, 9/10, DFS, two and 1/2 passes, clean shave with no weepers, and just a bit of bumpiness on my chin:

Pre-shave: shower
Razor: Maxwell June twinned DE
Blade: Kai DE (3) - still sharp, but not as smooth today- binned
Soap: Cella Red- thankful for still having this soap in my den
Brush: SOC Ash boar
Post-shave: cool rinse, then some Humphrey's Witch Hazel, I'll do a spritz or two of cologne before we head out to see my daughter, SIL, and grandson for Thanksgiving, Grampa got away with no cooking this year-Yay!!

To all my B&B friends celebrating today- have a great Thanksgiving. And, to those B&Bers that aren't celebrating Thanksgiving today, my warmest wishes to you and your families for a happy and healthy holiday season! 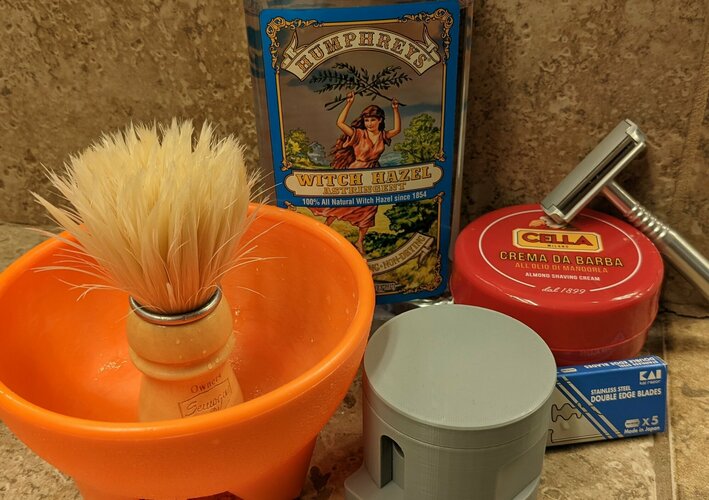 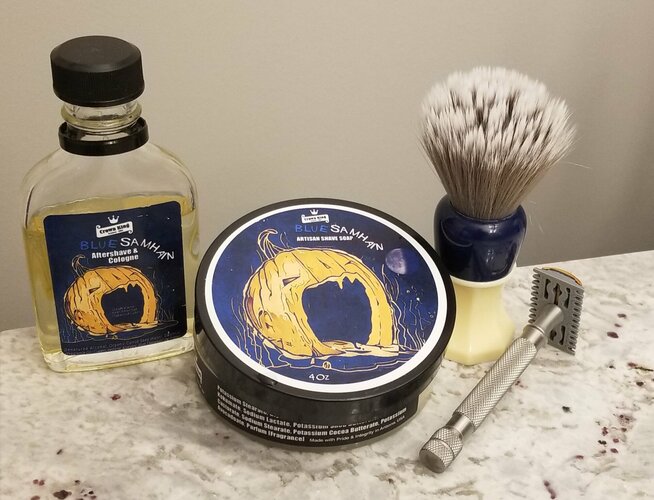 Contributor
11/25/21
I waited for the Martin de Candre to be delivered yesterday for my Wolfman Wednesday shave. Then it was too late after I got everything done. Then today rather than use the 200g I got yesterday I used a sample of the same soap that I forgot had. I haven't shaved with it in a few years and I wanted to make sure I like it before using the jar. Well I do still like it. Not as much as Vetyver, but, enough to keep it. I will use the sample till it is gone though. Scooping seems to work work well. At least until the sample is gone. I would like to load from the puck at some point though to see if it makes a difference in the lather. I had enough for my normal three passes plus touch up, and, then enough to wash my face with what was left in the brush. Not sure if it was optimal or not on the hydration. The instruction card says not to add to much water and that the lather shouldn't be slimy. I like well hydrated lather so I may well push it further. It seemed kind of fluffy today. Not where I usually like my lather. Still lovely soap even if I need to dial it in.


This will be one of the few soaps I don't have a matching after shave for, but, I figured Caron Pour un Homme would pair well. Complete with EdT. I really like this one, but, the novelty has worn off. I now have two soaps I use the after shave for with it's dumb spray, and, three I use the frag I put in an atomizer cause it is dumb to have a splash frag if you are wearing after shave.

The M&F heritage II is a really nice brush. I want one in finest at some point too, but, I like this knot a lot. A lot of back bone. I'd like to face lather with it next, but, I will have to use another soap since I am loading the MdC in the bowl. 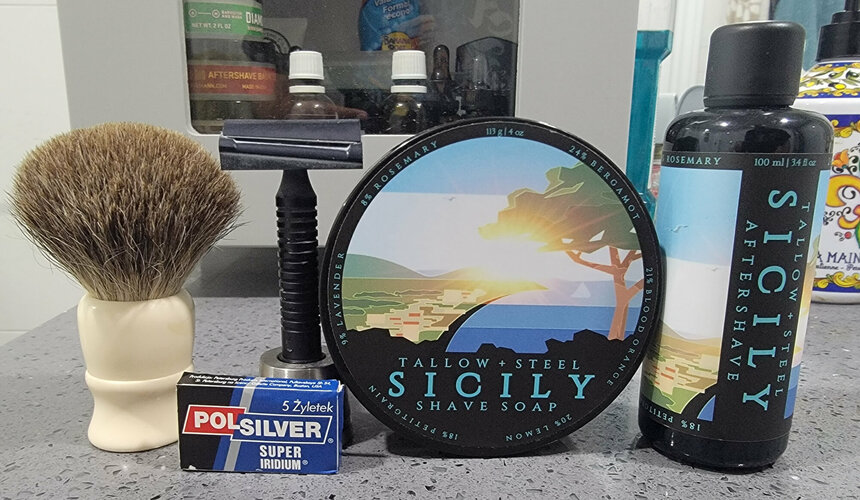 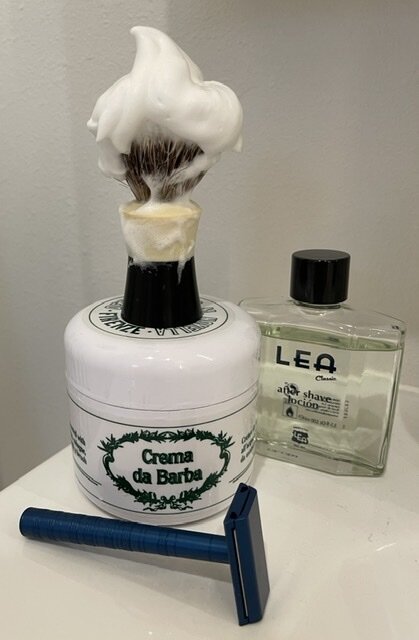 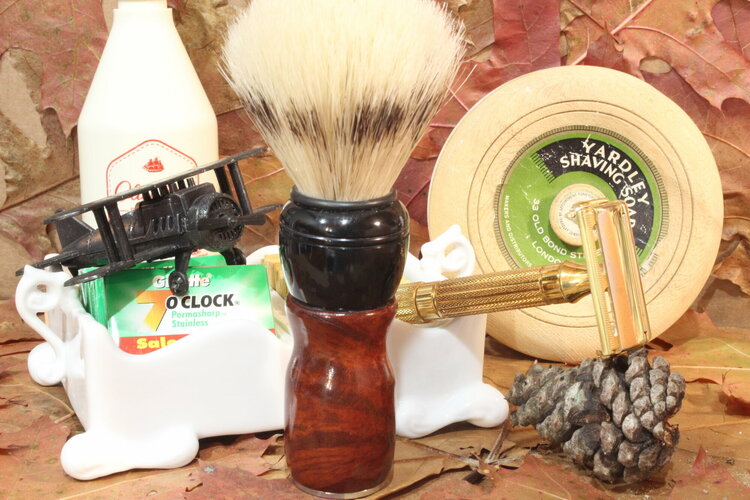 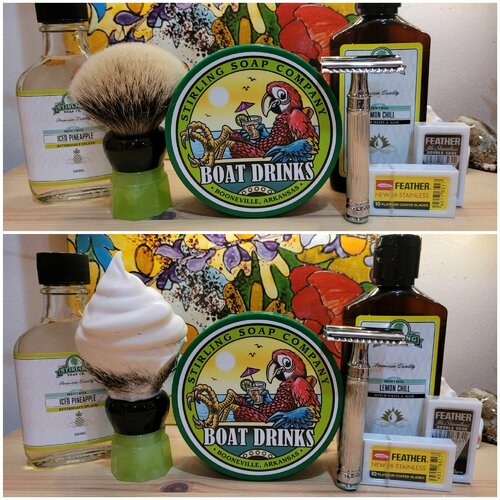 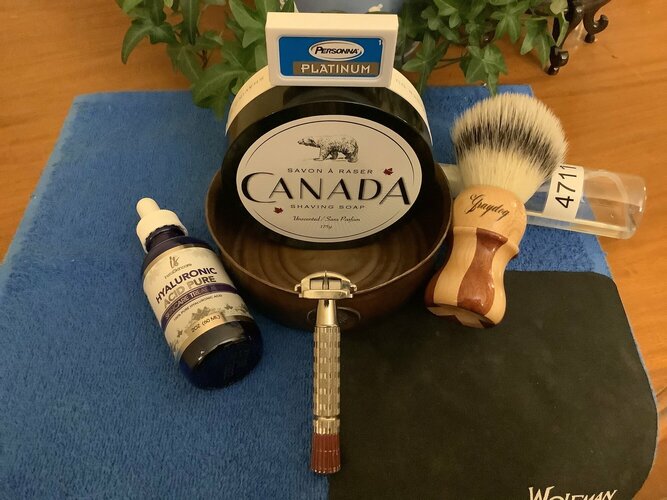 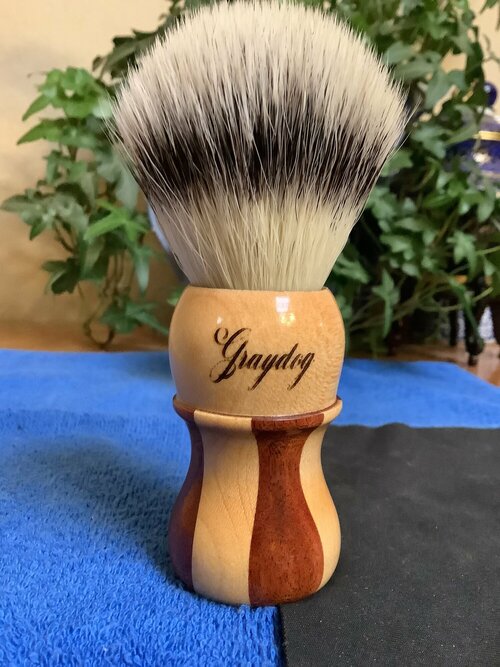 I like a lot of blades but if I had to pick one.. Feather is definitely in the discussion. In my mind they’re the equivalent of the 1998 New York Yankees. Very business like and we all just knew that that they would be the champions.

awk_m4 said:
I like a lot of blades but if I had to pick one.. Feather is definitely in the discussion. In my mind they’re the equivalent of the 1998 New York Yankees. Very business like and we all just knew that that they would be the champions.
Click to expand...

Hey, thanks for your comments! Totally agree with you...hahaha! One of my champions too...

I am enjoying using the fall/winter soaps. 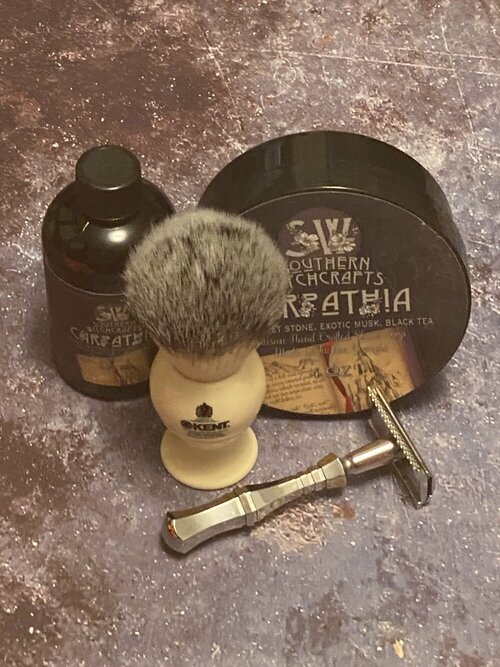