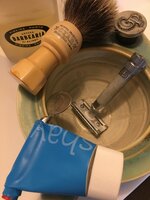 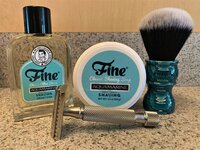 Sent from my SM-A505FN using Tapatalk

After my great mug shave yesterday with my Manhattan Cutlery Sheffield razor, I just couldn’t help myself. I reached for an even older Sheffield, my Frederick Reynolds which I’d touched up last night on the ILR. I decided to use my TOBS Peppermint shave cream to complement the PAA Frost Byte AS’s peppermint.

Part of the benefit of having a son who’s been straight shaving for close to two decades is their user experience. Ben steered me towards both these Sheffield’s and towards a third, an early Boker arriving back from Glen Mercurio tomorrow from a restoration. Apparently, Boker used to import Sheffield steel before a German Trade Act halting such imports in the early 1890s.
I expect after Glen’s beauty treatment and honing it will shave as beautifully as it’s predecessors and the two Japanese razors Ben selected for me as well.

The lather was well-generated with my new MrEE Monster Synth, but like all TOBS creams was severely lacking in the post-shave skin feel department. Nancy Boy and MWF have set a very high bar, and I’ve yet to find a cream or soap that comes close to meeting it. Then again, I should take the crotchety curmudgeon factor into account. The three pass (WTG, ATG, XTG) mug shave with the Reynolds razor was buttery smooth and left my face clean and velveteen.

For the dome shave I pulled out my early production (1920) Gillette Big Fellow OC with the large Old Type head, I loaded a Wizamet Iridium on its second and last shave and proceeded to have an exemplary two pass (ATG, ATG) velveteen noggin shave. I really like the longer handle on this particular Big Fellow. I suspect I would enjoy the later model with the New Standard head more, but that’s an issue for another day! All in all a splendid shave to match this bright sunny day here in the Philadelphia suburbs.

It was a dark and smoky night, the moon glowing a deep dirty orange through the haze. Somewhere a fault in the transmission lines was causing the lights to intermittently flicker. 3am was a strange time to be awake, but sleep simply wouldn't come. Silence fell heavily over everything - not even a cricket could be heard - a cemetery couldn't be much quieter.

Then I heard it. Barely at first, then more and more urgently, a scratching at the door. Something wanted to get in.

Picking up my trusty Para Ordnance 1911, I jacked a round into the chamber. The clatter of the metal parts of the pistol shattered the silence and my nerves. Creeping to the door, I reached out, pulled open the dead bolt, and paused.

The scratching was louder, more frantic, and right on the other side of the door.

My nerves about to snap, I jerked open the door, and BAM, BAM, BAM!!

The neighbor's stupid cat launched itself into the night, and three impact craters surrounded where he used to be, showing that I'd missed completely.

But ho! What's this?! There in the corner where the USPS man must have left it, Hallows! 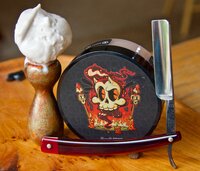 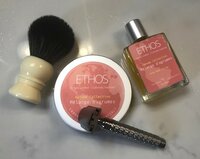 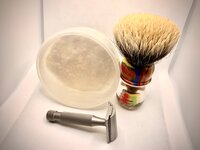 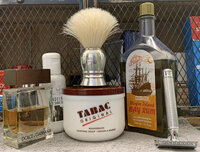 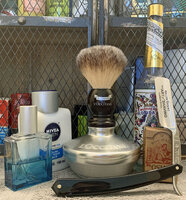 Unfortunately for me, I read somewhere that "it smells like _____" and now I can't get that out of my nose every time I smell it. I still like it, but it would have been fun to come to my own conclusion. Spoilers exist for soap smells, I guess!

I've found the limit for Lab Blues on my face, which is 5 shaves. 6 is fine, no irritation, but the shave isn't nearly as close as a fresher blade. Good to know. 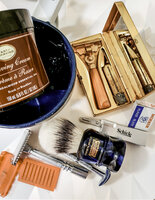 That's the brush Bob just put up on FB a little while ago, right? Thing looks fantastic!

Lovely stuff. The soap really is super slick stuff, and has a very nice mild scent from the tonka bean. The knot has medium backbone and the tips are really soft, a real pleasure to use. Between the extreme smoothness of the Tatara and the slickness of the soap, this was a crazy smooth shave and quite close. There was a minimal amount of sensitivity afterwards, but not too noticeable. The serum is basically an oil, and left a little bit of a coating on my face. Not my preferred type of post product. All in all though, very enjoyable.

benos said:
That's the brush Bob just put up on FB a little while ago, right? Thing looks fantastic!
Click to expand...

It is, although I saw it in his vendor topic here. I almost spit out my beverage when he posted it trying to buy it before the electrons cooled. 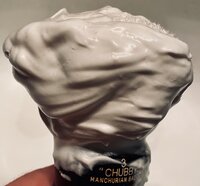 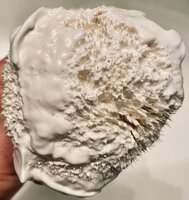 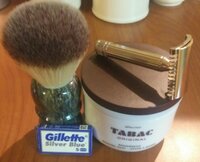 Accidentally scraped open one of the dermatologist scabs. 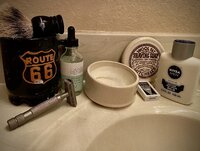