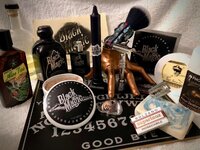 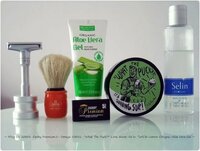 Cold wet flannel to my face.


A new shave set up to start the weekend.

After a 5 minute bloom in hot tap water the WTP?! soap provided a wonderful slick lather for the shave, dipping the tips of the brush in water between each pass, leaving a superb post shave feel.

I've continued using blades, that i've infrequently used in my shaving den.It's been a while since i last shaved with the derby premium blade..When i first start ventured into the wonderful world of traditional wet shaving i had a very horrible experience with a derby extra blade,which resulted in giving me a nasty bite i was a little apprehensive using the derby premium on it's maiden shave but after the first few seconds of starting the shave i gained confidence very quickly because i now know if a blade is suited to my skin type or not in a few seconds the derby premium i find very smooth with no tugging issues with a smooth efficient edge, which is completely different to it's sibling the derby Extra,however thinking back now it was my 100% lack of technique & shaving confidence that probably resulted in the nasty bite i encountered from the derby extra when i first started out..I still have a few in my vast assortment of DE blades, which i'll add to my blade rotation in future shaves.

The derby premium paired together very comfortably with my Ming Shi 2000s, with the lightest of touch both the razor & blade was a smooth duo slicing through my stubble with effortless ease.

A enjoyable 3 pass + pick ups silky smooth shave with no errors to report.

Finishing to the shave off with a generous dollop of Aloe Vera Gel.

My face is feeling super smooth and smelling devine.

Enjoy the start of the weekend, ladies & gentlemen. 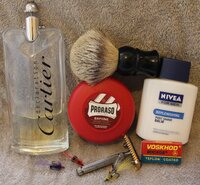 I hope you all have a stellar Saturday

I am quite pleased to have acquired one of the latest offerings from Declaration Grooming. Massacre of the Innocents is influenced by Parfums de Marly's Herod EdP. After using MOTI just once, I was compelled to pick up a bottle of Herod. This is a lovely cool weather fragrance. The soap and splash do a nice job of approximating the essence of Herod but certainly can't begin to replace it as there is a level of depth and intricacies that are simply not possible to duplicate in the soap or splash medium. I will thus restrict the following impressions to that of MOTI which is quite enjoyable by itself, but if you find this to be pleasant, I strongly encourage you to acquire a bottle of Herod. You will not be disappointed.

Massacre of the Innocents opens with spicy, woody vanilla with an understated cinnamon. It falls just sort of "festive" to me, and for that I'm grateful. From start to finish, the fragrance maintains this warm, cozy, smoky vanilla, but the cinnamon fades in favor of wood and resin. This is soon met with a well-blended tobacco and cedar essence that's reminiscent of a walk-in humidor where the sweeter blends are just inside the entrance. The whole accord swells and ultimately acquires a conservative pleasant musk base without abandoning the warm, smoky, vanilla and woods.

With regard to performance, this was my second use of Declaration Grooming's "milksteak" base, and it continues to impress. It loads a bit more intuitively than Icarus, but from a personal perspective, nothing will replace the unique marshmallow cream loading of their prior bison tallow base. Milksteak lathers just as easily, requiring a typical amount of water, but going just a bit beyond that will raise the performance level. The results are a dense, creamy lather that's quite reminiscent of Icarus. After having used this twice, I feel like the primary and residual slickness that was already outstanding in Icarus, has been improved upon with Milksteak. The post-shave is stellar, but given the performance of today's most elite artisanal soaps, I can't say Milksteak has made a dramatic level change. It's just difficult to even conceive of something beyond perfect which is where I believe about five artisans are right now, yet they're all quite different. Some post-shaves have a natural feel, as if I'd never dragged a blade across my scalp. Others provide a moisturized sensation, and some of those last all day long. Then there are others that leave my scalp feeling silky. I really enjoy all of these "types" of post-shave. My impression of Milksteak is that it's in the "natural" category. I don't want to be the one to pump the hype brakes, because this base is without question one of the best I've used. However, it seems like a natural progression from an artisan who is attempting to tweak as opposed to overhaul.

One aspect I have not mentioned, yet is probably important to some, is the animalic coloring from the Icarus base. I did note this with Icarus, particularly with it's debut fragrance, Santal Auster, but it didn't particularly bother me. I found that airing out the tub was enough to mitigate this effect. In more robust fragrances like Darkfall, I never picked up on these overtones as compared to the bison base. It is my understanding that Milksteak strives to overcome this hurdle, and it may have been the impetus for the formula change. I certainly looked for the animalic coloring in this base, but I could not detect it. Since I was never particularly sensitive to it, I'll let others make that judgment. As per Jason Rudman's review of the unscented Milksteak, it would seem to be a non-issue, now, and that alone may very well be the reason some "upgrade" their favorite scents from Declaration Grooming.

An epic shave to wrap up these few weeks traveling thanks to Frankincense’s kindness and his beautiful soap.
His handmade soap can only be described as exquisite; it creates a beautiful dense, rich and slick lather with a post shave feel like few.
Thank you so much Fran for giving me the opportunity to enjoy your creation. From now on, this soap has become my travel companion. 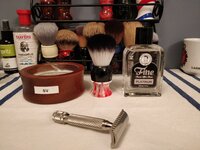 2 passes for a superb shave