Stay healthy, everyone!​
U

Great info, thank you for taking the time to answer so thoroughly. 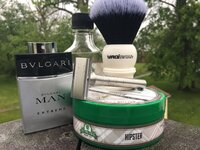 Yesterday’s shave with my Brass Gem Jr. Model 1912 was spectacular. Realizing that all safety razors are essentially just blade holders, the fun part of the hobby for me has been mastering the particulars of shave technique peculiar to each blade holder design. William Henson patented the first “hoe design” safety razor in 1847, but it really wasn’t until the 1880s that the Kampfe Bros. of Brooklyn, NY began producing their SE safety razor that later led to the Gem brand. With my Gem razors, since discovering the delightfully smooth and sharp SS Pella blades, shave technique turns out to be consistently similar with these “hoe design” SEs. Yes, there are minor differences in stroke and angle when shaving with an OC versus a SB Gem model, but the design itself just works!

For today’s shave I selected the G-Bar. This particular blade holder is one of the SB variants, and has never failed to deliver a top-of-the-line shave, and this morning was no different. The razor has a certain heft that just feels good in the hand. It sang “scraping toast” lyrics as it mowed through my whiskers right down to the skin line on that first WTG pass. The Nancy Boy shave cream provided a nicely slick, cooling cushion with its 6 drops of M-Bomb added. The 15.8 oz 316L SS Synth by Rearden Razor provided a bit of exercise during the two lather applications. The second ATG pass brought your happy narrator to VBSS land, the objective of every shave, and an A on the cotton ball test. Alum revealed some slight heat on the top of the back of my dome, but otherwise, another spectacular Gem shave. I feel clean, cool, velveteen smooth and refreshed.

My wife thought this photo was "too busy". She's probably right, but I liked it anyway, so here's a bonus pic:

My wife thought this photo was "too busy". She's probably right, but I liked it anyway, so here's a bonus pic:

Matt:
Love your photography and your beautiful Enders collection. I understand you have one in every color ever produced!

Wow, who made THAT brush? Gorgeous!

Jgreenepa said:
Matt:
Love your photography and your beautiful Enders collection. I understand you have one in every color ever produced!
Click to expand...

Thanks! In terms of the Speed Shavers with the metal spine, yes, I have 3 greens, a red, and a yellow. 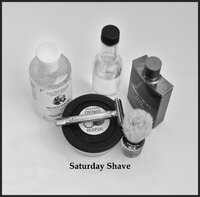 Saturday’s Shave​
Another beautiful, sunny Arizona day. Today’s soap is Haslinger Coconut for the second day in a row. The brush today is B&B Essential Boar, Remembering Sue version. The razor today is the Mergress XL with a Treet Plat blade. After a four-pass shave I used cool water to remove any excess lather. I then applied Thayers Rose Petal WH followed by Clubman. After a shower, the fragrance was Jimmy Choo Man Intense. 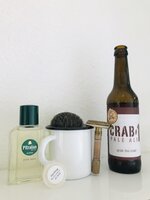 Ok, Feather+ Pitralon= Not a newbie combo,...ouch
Crab+ Barbershop works great together though.
Last edited: Saturday at 7:03 AM 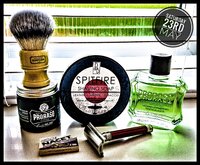 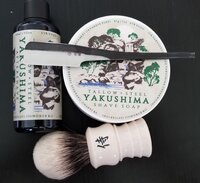