It's another "FREE WEEK" ladies and gentlemen.

It's time to be creative.

Please feel free to post any photo, with any gear and any style you chose, or contribute by telling us what you used in your shave, with comments on the shave, if you desire.

Color, B&W, sepia or a photograph with any type of artistic touch you wish is always desired. 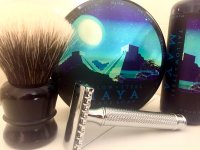 Bit of a crappy photo compared to the rest of these (must try harder) but today I had my first go with a shavette.

Notes: First time ever with a shavette (I've had a very tiny bit of experience with a straight but never a shavette before). It was a much nicer shave than I had been led to believe. The shave itself wasn't fantastic, fine to look at but I can feel a little stubble, quite bit of burn on my neck though (probably the blade), one weeper. I think I may have benefited from the crappy Euromax (anyone ever heard of these?) blades as they aren't the sharpest so it gave it more of a SR feel, I never felt I was in danger of cutting myself. Originally I was going to snap a decent DE but I think I may stick with these for a bit, we'll see.

The AS is new too, the Clubman Vanilla doesn't seem as long lasting as the Musk and it was quite an experience patting it on my neck after the shavette, definitely woke me up. 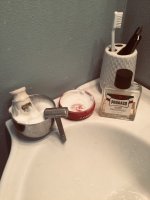