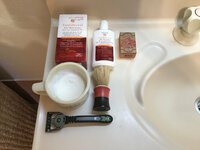 That is probably the best looking brush I have ever seen, where and when did you get it?

​
Shaving Recipe For the day.

Cold wet flannel to my face.

The Cella shaving cream is such a wonderful performer. Each time i use it's scent reminds me of a warm Bakewell Tart...The Benjamins mentholated bay rum is a great match for the sweet almond fragranced Cella.

Another wonderful 2 pass + pick ups close comfortable shave with no errors to report...Finishing the shave off with a small dollop of Creightons ~ Sensitive PSB.

Spicy Sunday, all the way!

Back after a much needed vacation, todays shave was Arko all the way. An Arko puck, in the Fine lather bowl and an Omega S Brush, Rockwell 6S with a brand new Dorco ST-301 blade, 2 pass shave R4 and R2, topped off with a pass of the alum block and a healthy dose of Arko Cool Aftershave and a dollop of Duke Cannon face cream. 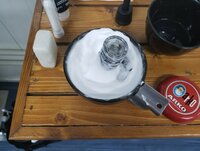 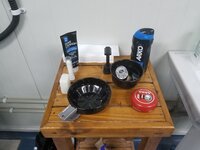 Soxfan4life said:
Back after a much needed vacation, todays shave was Arko all the way. An Arko puck, in the Fine lather bowl and an Omega S Brush, Rockwell 6S with a brand new Dorco ST-301 blade, 2 pass shave R4 and R2, topped off with a pass of the alum block and a healthy dose of Arko Cool Aftershave and a dollop of Duke Cannon face cream. View attachment 1194462 View attachment 1194463
Click to expand...

Welcome back. I see you haven't missed a beat. Just a nice shave there. 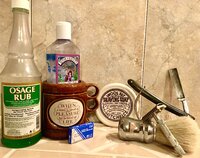 At the suggestion of one of our 30DC Crew members at TSD, it was decided that this Sunday all on the Crew who wished would shave with the ugliest razors in their collections. In my case I decided to shave with a newly arrived Thistle Cut Persian and my safety razor nemesis, my French Spadson safety razor. I did not clean up or replace the scales on the Thistle Cut straight razor, but only set a bezel and honed it up on a Naniwa progression through 12k finishing on my jasper stone last night. The scales are not original to the razor and much too large. The Spadson was designed to have two shaving edges, one mild and the other aggressive. In the case of this safety razor the proper adjective is assaultive.

Although both razors appear somewhat the worse for the wear, only the Spadson provided a troublesome shave. My Omega Pro48 whipped up the two types of lather I enjoy - a thinner, wetter one for the mug and a thicker, more yogurty one for the dome. I will say that the edge on the Thistle Cut 4/8 was an amazing surprise, and I received one of the best three pass (WTG, ATG, XTG) straight shaves I’ve ever had on my mug. Once this razor is cleaned up and refitted with proper size scales, it’ll be one of the jewels of my collection. It’s smaller blade size makes it highlymaneuverable and a true joy to shave with.

The French Spadson, on the other hand, proved a trial to use. The razor never sold well. It was designed to supposedly offer an aggressive shave on one side and a mild shave on the other. My experience with it is that both sides are assautive. I’ve been shavingwith DEs since the late 60s, and so say with somelevel of assurance that I know my way around a standard DE. My usual shave with this monster is generally restricted to May Mayhem shaves. Safety razors are used on my dome daily, but after today’s shave, I’ll have to take a day or two off to allow my scalp to recover from the irritation and weepers (several) I experienced with this beast! The best I can say about today’s dome shave is that it’s over! Thank goodness there’s always tomorrow! 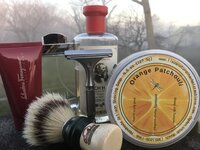 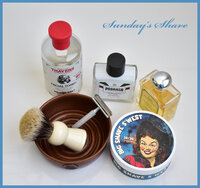 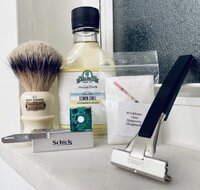 First time with an Injector and I am mighty impressed. Smooth, comfortable, zero alum feedback, two-pass DFS. The Magnum scent is my favorite of the three Wickham samples I've tried, but I'm not sure I'd buy a full puck yet. The soap seems to have a particularly small sweet-spot for water compared to others I've tried.