The top three I have tried so far have been Lagavulin 16 and 8 year (prefer the 8), Laphroaig Select (10-year mostly but not certified as such) and Ardbeg 10-year. These have pretty good smoke and very good flavor, and I prefer the younger ones like the Lagavulin 8-year as the more they are aged, the stronger the cask's influence is and the less the smoke's prevalence.

Also tried Bowmore 15-year which, contrary to what I was told, had ZERO smoke to my palate. Tried some others like Macallan and Oban which don't have a smokey profile so not interested in that. Also tried Johnnie Walker Black, Double Black and Island Green and none of these appeal to me.

Basically I'm trying to find the smokiest and smoothest within a reasonable budget, appreciate any suggestions that would be available in Canada.

Laphroaig is the best value in smoky nice scotches as far as I'm concerned.

Talisker is another good one IMO.

Lots of people are sensitive to smokeyness, thus a small amount like an Oban or Bowmore will tell their pallate it's a smoky whiskey.

Pattorashu said:
Laphroaig is the best value in smoky nice scotches as far as I'm concerned
Click to expand...

Agreed. When I drank (professional for 38 years) Laphroaig 10 was my 'daily drinker'. The 30 is wonderful for special occasions.

If you really want to rock your world, try the 10 Year Old Cask Strength. Beautiful Whisky. Beware, though, it will cauterize your esophagus on the way down.

When it comes to budget though, you’re talking about Laphroaig and Ardbeg.

Around here I can get Laphroaig 10 for about $45 and Ardbeg 10 for $55. You’ve already tried JW so everything else I can think of will be more expensive or hard to find.

You can also give Highland Park 12 a go. I find it for around $50. Prices vary a lot though especially since I’m in the States. Good luck

never-stop-learning said:
If you really want to rock your world, try the 10 Year Old Cask Strength. Beautiful Whisky. Beware, though, it will cauterize your esophagus on the way down.
Click to expand...

I've heard mentions of the cask strengh, may be the next on my list - my concern (lol if there is one) is that the flavor of the wood tames the smoke, as evidenced by the longer maturity products.

Homer said:
I've heard mentions of the cask strengh, may be the next on my list - my concern (lol if there is one) is that the flavor of the wood tames the smoke, as evidenced by the longer maturity products.
Click to expand...

Add a couple of drops of water and everything blossoms nicely.

Add a couple of drops of water and everything blossoms nicely.
Click to expand...

I have tried this with all the whiskys mentioned, some work well, others, for example the Ardbeg, get to be harsher.

Select tasted watered down to me when compared to regular strength Laphroaig.

Moderator Emeritus
See if you can find Longrow which comes from the Springbank gang in Campbelltown.

I’m a Laphroaig fan. The quarter cask, cask strength is really nice. A little less in your face smoke and it requires a little water to tame the alcohol heat. My wife picked me up a bottle of triple wood(I think that’s what it was?) at a duty free shop last year. To me it seemed like Lagavulan and Laphroaig had a baby together. Lagavulan 16 is one of my all time faves.

See if you can find Longrow which comes from the Springbank gang in Campbelltown.
Click to expand...

Never heard of it, will consider if I come across one, appears to be in limited locations around here...

Lagavulin 16 is one of my all time faves.
Click to expand...

Definitely top-5 for me, however the younger one has less maturity and thus the smoke is more front and center.


Homer said:
the more they are aged, the stronger the cask's influence is and the less the smoke's prevalence.
Click to expand...

Usually, you will find that scotch drinkers tend to refer to the type of scotch you like as "peated" (and the opposite is "unpeated".) It's the decision to use plain old hot air, or peat smoke/heat, to dry out the germinating barley.

Islay is well-known for it's peated scotch. But not all Islay scotches are peated, or equally as much. Bruichladdich is another Islay to try ... they make both peated and unpeated.

Talisker, from the Isle of Skye, is very good ... not really "peated" like Islay, but ... try it. It's great and since you like peated scotch, you will probably like this one too.

Lots ... some, anyhow ... of other distilleries are getting on the "peat bandwagon" (or have always been there), so keep an eye out. Someone mentioned Longrow ...


djh said:
See if you can find Longrow which comes from the Springbank gang in Campbelltown.
Click to expand...

... I've never tried it, but Springbank comes highly recommended and Longrow is their peated version.

Contributor
Check out McClelland for value. Pretty good stuff, and usually around $25 in the USA.

If you want to be smacked on the de work smoke, then it's hard to beat Laphroaig or Ardbeg. 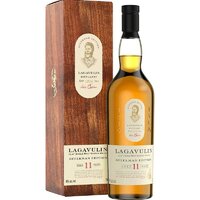 I love all manor of smoky scotches. This one is my be all / end all.

I look forward to trying that sometime, but I wouldn't call it "budget"!
B

Best bang for the buck and good quality is Ledaig
N

Honestly I find Ardbeg a bit thin in taste. Lagavulin is nice but not very smoky to my palate.

Mildly smokey, my favourite atm is Nikka Coffey Malt, smells quite like turps, in a good way and the taste is sublime. Obviously not Scotch, but seriously good. Not cheap though.
Last edited: Feb 24, 2020

I love smokey scotch. I've had the three you mentioned as well as Caol Ila and Talisker. My favorite by far is Lagavulin. Caol Ila is nice and smooth but doesn't have quite the peat that Lag has. Laphroig is also nice but I just don't find the taste as distinctive. Ardbeg is probably the only scotch that I just can't get along with. I bought a bottle of 10 Year and I tried drinking it. I couldn't get a single glass down. I put it away for a long time and then took it out again hoping my taste buds were messed up when I last tried it. Same result. Just disgusting to me. I know people love it. I gave it to my neighbor and I think he liked it. For me, there is nothing that compares to Lagavulin. I've had both the 16 and the 8. I find the 8 is lighter on all fronts, peat, smoke and color, than the 16. It has that distinctive Lagavulin character but I prefer the 16. I've also had several bottles of the Lagavulin Distiller's Edition, 12 Year I believe. Also a Cask Strenth. I still prefer the old standby 16 Year. That's not to say I don't like drinking a Balvenie, Glenmorangie, Glenlivet Nadurra or a MacCallan every once in a while. One that I have not tried but am intrigued about is Bruichladdich, specifically their Port Charlotte Islay Barley which they say is "heavily peated". Ultimately, you should drink what you like. Everyone's taste is different. The fun is in trying all of them and then settling on one or a couple that you really like best. No different than shaving. Enjoy the ride.
You must log in or register to reply here.
Share:
Facebook Twitter Reddit Pinterest Tumblr WhatsApp Email Link
Top Bottom