lol, not really, but there is no sane reason that I should buy a limited run Tulip 1 in 2-band, is there?

I mean, I already have a number of fantastic brushes that I enjoy and which fit my preferences in a brush almost perfectly, but I went on the Simpson site to snoop some size data on the Trafalgar synthetic and there it was: a 2-band in a small knot and a handle I don't own (but have admired) for about $150 delivered.

Contributor
Simpson makes my favorite brushes. You have my permission to buy as many as you want.

Moderator Emeritus
I've been eyeing that, too. Intriguing brush.

Happy to see it isn't that ugly label design they used on their new Super badger Tulips.

The excellence of enabling here is without rival*


*except on other gear related forum sites.

Glad we could enable you.
T

There's always room for one more in the collection here are reasons you should buy it:

1. Heirloom
2. Makes you feel good looking at it.
3. Can always sell on BST if you don't like it.
4. Supports production of more fantastic brushes.
5. Life is short.

As you may discern, I'm a bit of a Simpson fan already, so the arm twisting you've so ably administered is purely symbolic


The current Simpson stable in no particular order:

Special Pure (England) this was very prickly *and* shed to death, I drilled it out and re-knotted with TGN Finest
Special Best (England) another shedder, replaced with the current one by WCS (Thanks WCS!)
Wee Scot "Best" (UK) the prickliest brush I have ever used, original vendor told me "tough luck, sell it", I did.

56
Beaufort 2 with a current production Pure knot (my current one borders on too prickly)
Major Best (because it's cool!)
A bigger face (so I could enjoy a Polo 8 in Super)

No Chubby? What's going on?

awa54 said:
lol, not really, but there is no sane reason that I should buy a limited run Tulip 1 in 2-band, is there?

Only one reason that I can think of.... 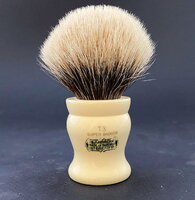 With the number of brushes the average B&B'er collects, you'd better have a hefty brood if you're looking to make them into heirlooms or they'll just turn into "crazy grandpa's box of old shave brushes nobody wants".

As to the OP...well, for us, shaving is a hobby, and nobody needs hobby stuff. If you think you'll use it and it'll make you happy, I think it's a good purchase. And if you're wrong, there's always the BST...

If the Classic is a Chubby 0.5, as some say, then I'm not a Chubby fan... density is great, but springiness is lacking compared to other knot configurations (or bristles). Plus I like longer slimmer handles as a rule.

As far as a Tulip 3 goes, I top out around 20mm for "normal" loft knots and a bit bigger for short lofted ones, so the T3 is likely to be a bit bigger than I prefer, not to mention larger knots in 2-band get quite expensive!

Ambassador
I have a Tulip 2 in super, and I have also been eying that 2-band!!

Everyone praises the Chubbies, and justifiably so, but it is in the smaller luxury knots where Simpsons really shines and where they continue to distinguish themselves. Few brushmakers provide luxury in knots of 24mm and smaller, but Simpson does.
D

Owen Bawn said:
Everyone praises the Chubbies, and justifiably so, but it is in the smaller luxury knots where Simpsons really shines and where they continue to distinguish themselves. Few brushmakers provide luxury in knots of 24mm and smaller, but Simpson does.
Click to expand...

Duke 3 and M7 are the finest brushes I own, because they are almost as luxurious as my Chubby 2 but of a much more practical size. Also the Rover in 2 band is amazing, best small brush I have besides my new Rudy Vey from the group buy.

I'm doubling down on (jokingly) hating Simpson now, since they don't provide tracking, or shipping confirmation for basic airmail deliveries...

the suspense is terrible

I think you'll like it. I went for the Commodore X1 in 2 band from that same batch and have been really happy with it. I love their smaller knot sizes!

awa54 said:
the suspense is terrible
Click to expand...

Shavely Manden said:
you'd better have a hefty brood if you're looking to make them into heirlooms or they'll just turn into "crazy grandpa's box of old shave brushes nobody wants"
Click to expand...

True that. My "nephews-in-law" (is that even a thing?) are both bearded weirdos (just kidding, except... beards) so my brushes will definitely be surplus estate sale fodder.

Well, the Beaufort 1 I ordered a day after ordering the 2 band Tulip arrived...
It's the least "pure" Simpson I've met so far; basically the knot is ever so slightly smaller than my Special in best and with the same tip softness and resilience as that brush, just darker tips.

If I could rely on getting another brush from this hair lot, I'd immediately jump on a Beaufort 2!