How do astronauts shave in the weightless conditions of space?

You've got to worry about all sorts of stuff: bits of whisker escaping into the wild, droplets of water and shaving cream going on excursions, scarcity of water, aftershave attacking other astronauts. (My guess is the space station has lots of HEPA air filters, and presumably space capsules do, too.)

Does NASA have to approve an astronaut's choice of shaving implements? What do the Russians use? The Chinese, now, too?

Has anyone used a DE blade? My guess is they would be tricky to handle in weightlessness, as in avoiding grabbing the edge of a rotating blade. But it sure would be cool to see someone shaving with a Single Ring in space. Very "2001"ish.

And, has anyone on Star Trek, TV or movies, been seen actually shaving? How do they shave in the 23rd century? Does Capt. Picard shave his head?

Any other realistic futuristic sci-fi movies with shaving scenes (not that dystopian stuff where society has crumbled into nomadic tribes)?

While this might seem a rather abstract exercise, with the addition of all the new commercial rockets and space capsules coming online (not to mention the perennial talk of six-month trips to Mars, which I will believe when I see them), we are likely to see a space rush of more people going into orbit (professionally or as tourists), and, eventually, the Moon.

Are you an astronaut in orbit right now? Feel free to chime in (if you have nothing better to do, like us). After all, Space Shuttle astronaut John Grunsfeld called in to Car Talk (anonymously) for advice. He also called Click and Clack for advice on repairing the Hubble Space Telescope.

Moderator
Contributor
Quite a bit of info here, including some stills from Star Trek TNG, Voyager and Deep Space 9

How do people shave in the 24th century?

Looks like the best way to traditionally wet shave in space would be with a straight razor.

The other day I opened the door to the shave den … An image crossed my mind, then it was gone again, in an instant. Wait. The moon landing! Shaving in space! In just a month, it will be the 50th anniversary of the moon landing. To me, this is humanity’s high-water mark; our greatest...

Was at the Udvar-Hazy Center at Dulles on Saturday with my sons scout troop and saw this.

The "Gillette Techmatic" used in Apollo 11 is on display. 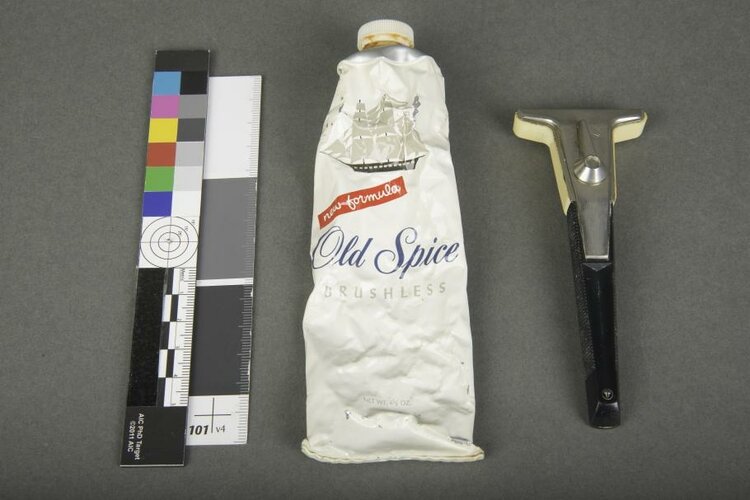 A detailed study of the facts about shaving in space.
The First Time Anyone Shaved in Space — AstroCryptoTriviology - http://www.astrocryptotriviology.com/blog/2016/8/12/the-first-time-anyone-shaved-in-space

@ERS4, you quote an interesting article on shaving in space. What I can't understand is why straight razor shaving in space has not become popular. There is no problem with clogging using a SR, just wipe the blade on a moist sponge.

rbscebu said:
What I can't understand is why straight razor shaving in space has not become popular.
Click to expand...

Probably because even the thought of a straight razor floating around the cabin in 0g is enough to terrify even the staunchest astronaut.

silverlifter said:
Probably because even the thought of a straight razor floating around the cabin in 0g is enough to terrify even the staunchest astronaut.
Click to expand...

Yes, some people should just never be allowed to use sharp objects.

BTW, it is not actually 0g, it is 0 relative gravity. If the spacecraft was not affected by the Earth's gravity, it would not ordit the planet but rather shoot off in a straight line away from Earth. Gravity is a most important part of orbital space travel. Basically, an orbiting spacecraft is in freefall due to gravity as it orbits.
Last edited: Nov 22, 2021
You must log in or register to reply here.

A Shave Outside The Surly Bonds Of Earth

How did you get started wet shaving? My story.

Ya like Dags? My foray into wet shaving and the honorable order of aquisition
124 125 126