Gents,
First of all.... let me say HATS OFF to shavemac.de
I am truly astonished at the level of service provided. Without a moments hesitation I would and will order from them again. It was simply and astounding experience!! I would like to point out, shipping from Germany was $12..... BUT the damn thing arrived here today, and I ordered it Friday! How's that for over the weekend speed! Also - I ordered one of their cheapie $8.80 brush stands, and with the brush, not only did they include the $8.80 brush stand, but for no charge, gave me the $29 brush stand as well!! PLEASE, do not ask or expect them to do so for you, as I would hate to have their incredible customer service taken advantage of, but they had no idea who I was, I simply ordered the brush and stand, and they sent me this honkin' one as well saying it fits the brush much better. I am quite impressed, and while I am speaking on the brush stand, I highly recommend it, as it holds the brush by the handle, and looks gorgeous. For the price of the brush, and stand, for the quality you get - it is a steal.

Now onto the brush, and how it stacks up. (keep in mind I have only used it once)

When I first opened the box this sucker came in, I was immediately taken aback by this things quality and beauty. To be quite blunt, I have never handled a brush that felt as nice, and as regal as this one. I personally like the feel and quality of this brush, much more than the simpsons I have seen/held and the plission high mountain I owned/used.

The bristles were like nothing I have seen or felt before.... they were incredibly soft at the tips, much softer than my vulfix, however the bristles were firm, and although they flexed, it was NOTHING like my vulfix #41. As odd as this sounds, it seems as though the stiffness of the bristles are on par with a cubby 3 or a plisson High white mountain, HOWEVER the tips were almost silky. Not to jump too far ahead - but when I lathered the brush up, it seemed much softer on my face than the vulfix, HOWEVER it was firm, and there was little give to it - so it created that "scrubbing" effect we heard about with the stiff bristled brushes - doing an incredible job raising the hair on your face, but at the same time being very soft and gentle, and feeling DIVINE!

From the descriptions I have heard of silver-tip I submit this is genuine, as it seems to take both descriptions into account. A prominent retailer once described silvertip to me as being very regal, delicate, and sensually soft, giving the user an incredibly decadent, delicate feeling with gorgeous white tips. Gordon describes silver tip as being inherently stiff, and provides a scrubbing experience, with very lush, firm bristles with white tips. Well here we have the best of both worlds, so from this point forward, I consider shavemac's XXL brush (at least the one I received) to be silvertip as quite frankly I try not to take things TOO seriously, and since there is no true definition of silvertip and this seems to be the best of both worlds, I think it is safe to say, if it isn't silvertip, it certainly is at least wonderful and that alone is what is worthwhile.

Enough gibber jabbering, here's what you clicked for, the pics... 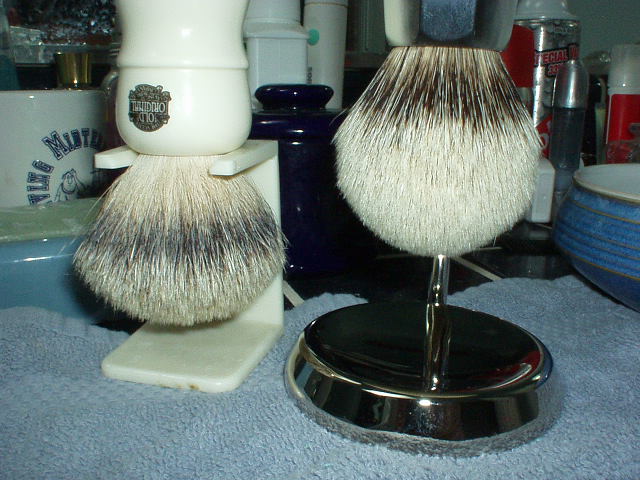 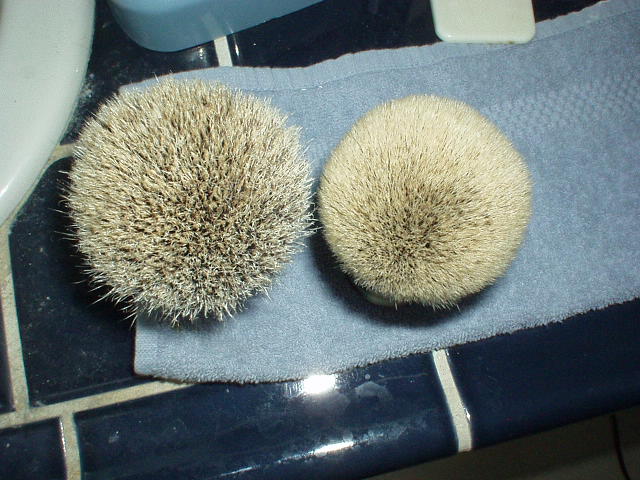 As you can see the shavemac is VERY densly packed, and although this picture doesn't illustrate it to well, the tips are a HECK of a lot whiter. 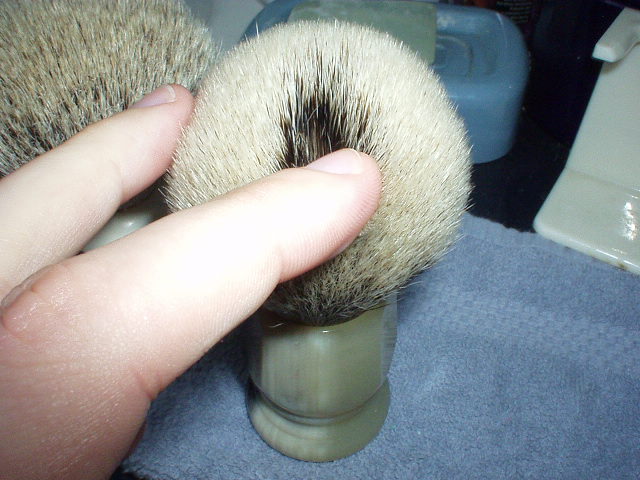 When putting my finger on the brush and applying pressure the bristles do not "bend" as the vulfix does, you simply "peel back" and spread the bristles, and even doing that is not too easy, as it is a very tightly packed brush, and is very hard to find space in it! 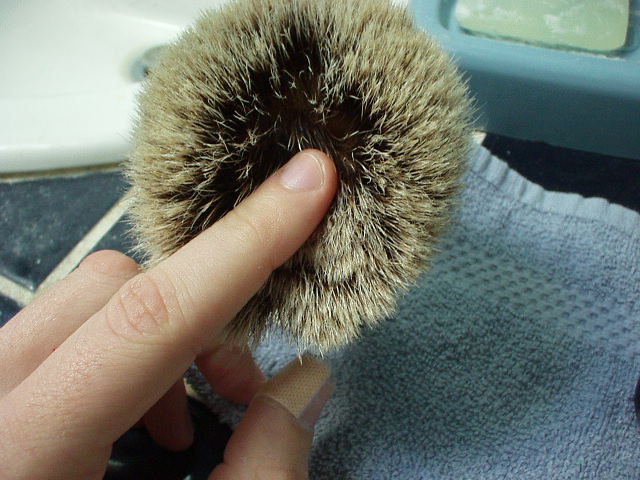 Applying the same pressure to the Vulfix#41 causes immense "bending" and "flexing" of the bristles, and they are a lot more pliable. 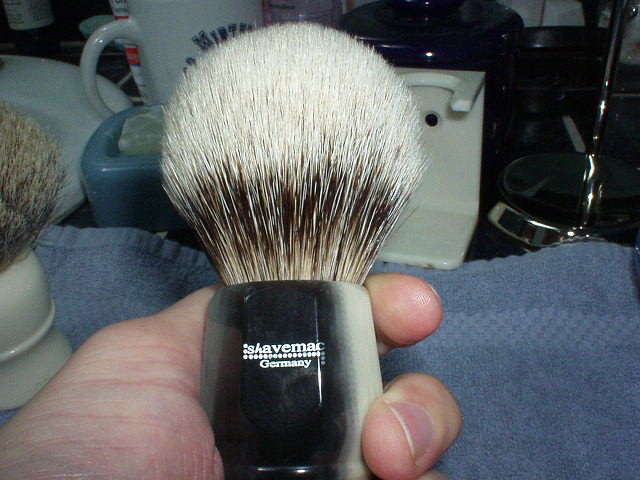 Take notice of the creamy white tips on the bristles. If you see any black specks on the head of the brush, those are NOT black bristles or mixed, it is the lower portion of a longer bristle. I would like to note, after comparing this brush to the Vulfix, and to a few others, I simply refuse to believe these bristles could have been bleached. The quality of this brush is humbling and certainly embarasses the brits... handling this brush quickly shows the germanic way it was created, and the extreme attention to detail. 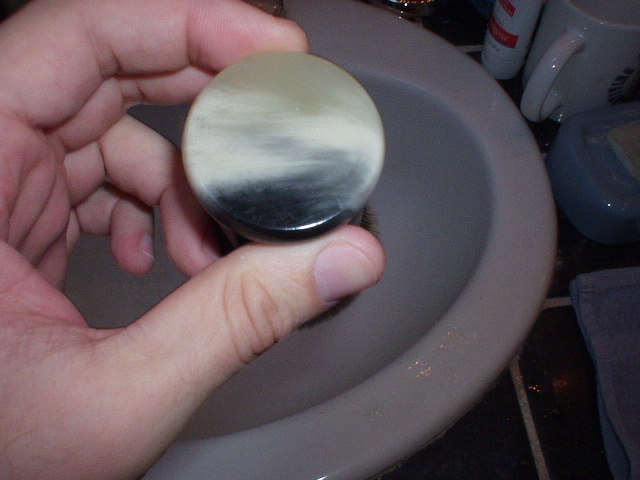 The bottom of the brush illustrates the gorgeous pattern of the faux horn. 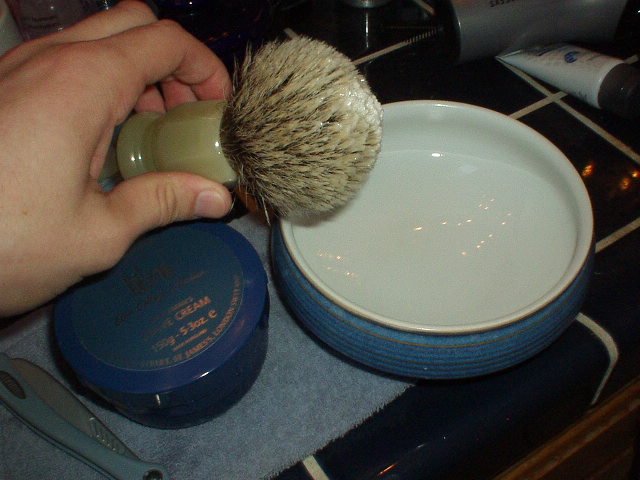 This brush holds ABSURD amounts of water, and I need to get used to it. It is smaller than the vulfix, but denser, and it holds at least 2X more water. It MIGHT possibly hold TOO much water. 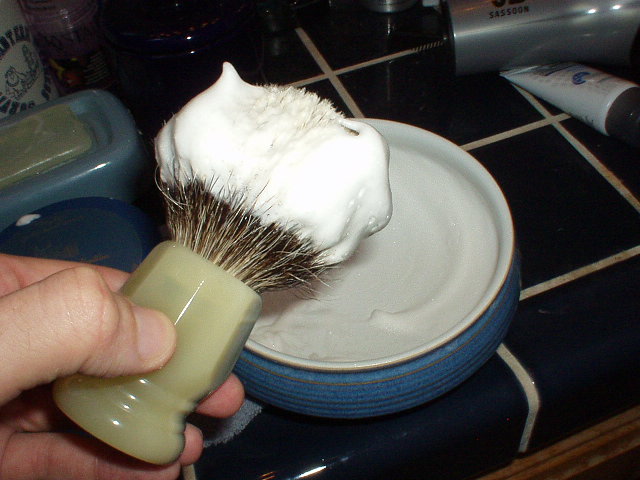 Twirling the brush around in the bowl with some Taylors Eton College provides quick - dense lather. Keep in mind this is the brushes maden voyage, and I find it take about a week for a brush to show its true potential. 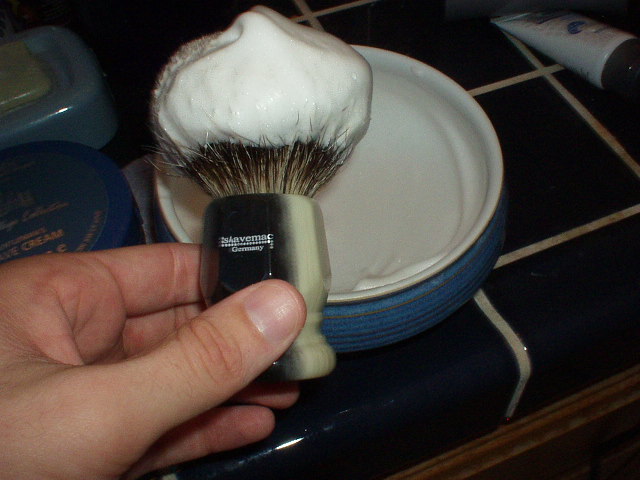 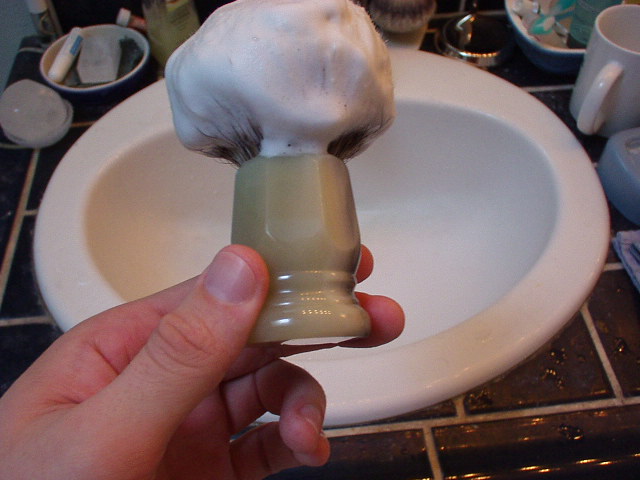 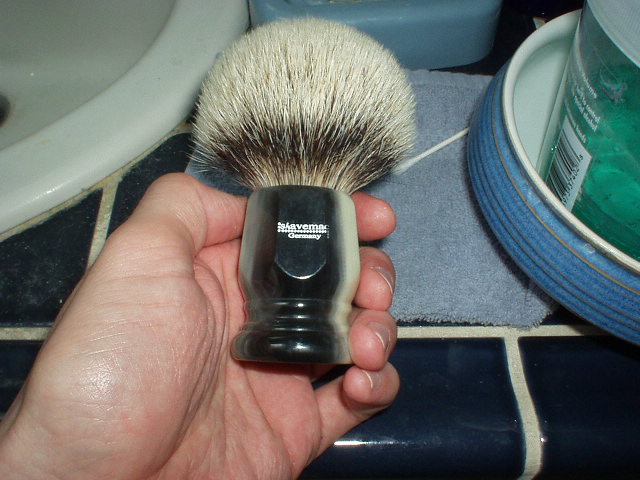 Brush "flowering out" after its first use. 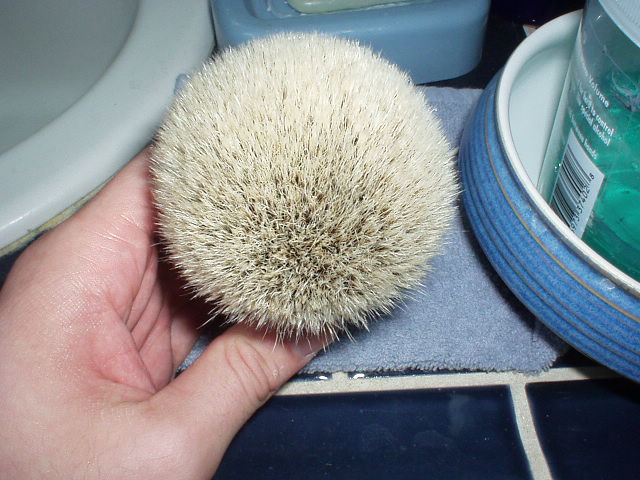 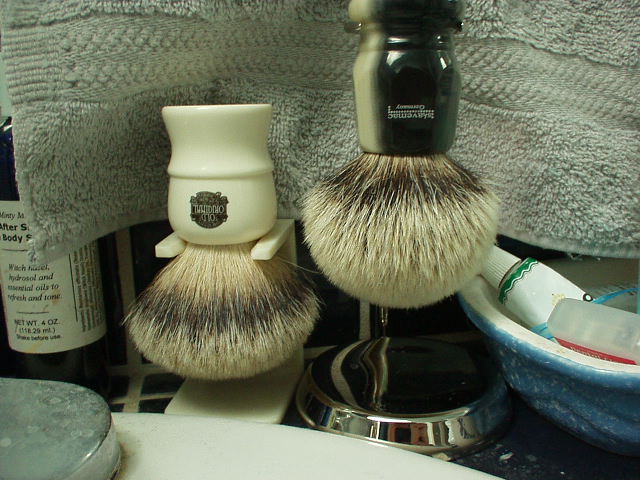 Side by side vulfix #41 both in full bloom.... the shavemac really opens up after its first use - and is a lot softer once wet.

Closing notes - I would not recommend immediatly knocking down shavemacs door to get one of these things. This is only my first use with the brush, and although lovely, it did not work "better" than the vulfix, and wasn't necessarily a better brush. I felt due to the flexable bristles in the vulfix - it was easier to get a good lather, and is much quicker at applying lather to ones face. The vulfix also applies a much thicker, more profuse amount of lather to ones face. While I feel both are exceptional brushes, right now I cannot say one is better than the other and I may very well never be able to. At this point, if they were the same price, I would go with the shavemac, just because of the gorgeous handle, and beautiful bristles, but for what you can get the SR241 for (same as vulfix #41) I would certainly go with the SR241 if money/value were of any concern... I think a much closer comparison would be the tortoise super brushes Charles has coming in - as they would be as astetically pleasing. This Shavemac is certainly a winner, and really knocked my socks off, and I feel as I use it more, I will become more attached to it.

I feel this would be the perfect brush for Gordon - as it has dense, stiff bristles - yet is soft and easy on the skin. Call it whatever tip you will... it is a BLAST to use, and I will never be selling this brush. The vulfix on the other hand - doesn't have as much soul, and since I am trying to cut down on my immense collection of shaving accessories - who knows, you might see it on the for sale forum...

Well there ya have it - my first take on the Horn Handled Shavemac XXL silvertip brush!

**Update** Since this review Shavemac has changed the source of their badger hair - and their newer badger hair is a lot softer/thinner/more flexable and not as white at the tip. Also - shortly after this review was originally written over a year and a half ago - I sold my Vulfix #41.... and I have no regrets doing so.

Joel,
Just curious but now that you have had your Shavemac for a while. How do you feel it stacks up against the Vulfix 41 that you used to have? I really like the SMF brush, but the knot is somewhat small for taste. I was just interested as if I was to order another brush I was thinking about the Shavemac XXL faux horn brush that you have.

rschul2 said:
Joel,
Just curious but now that you have had your Shavemac for a while. How do you feel it stacks up against the Vulfix 41 that you used to have? I really like the SMF brush, but the knot is somewhat small for taste. I was just interested as if I was to order another brush I was thinking about the Shavemac XXL faux horn brush that you have.
Click to expand...

Randy,
At first I thought I would miss my Vulfix #41 and I would regret parting with it.... never looked back. The shavemac XXL horn simply out classes and performs the Vulfix in EVERY way shape and form - no competition. It is really one moster of a lather-machine, it does NOT mess around. I find I have religated it, and my Polo 12 to the "once in a while" category, as typically I don't have the time/need to weild such a massive brush. If you are looking for something awfulyl big, and awfully beasty - the shavemac XXL anything is the way to go! I am sure that 30mm XXL is simply absurd!

I must agree with Joel. Having owned the same brush for over a month, I must say I am consistently impressed with three things about it:

1. It's water retention--Almost holds far too much water, but a couple of flicks, and all is well.

2. Heat retention--Holds a ton of heat, I get warm lather out of it for a good 20 minutes.

3. Latherability--Works especially well with creams, IMHO, and great with soaps.

I can't reccomend this brush highly enough. It has become my go-to brush and I must thank Joel for introducing me to it.

Just as a FYI - Since this review Shavemac has changed the source of their badger hair - and their newer badger hair is a lot softer/thinner/more flexable and not as white at the tip.
You must log in or register to reply here.