I left out another very efficient razor from my starting four - the Yaqi Top Aggressive Slant (I think that's the actual name on AliExpress). Here's a stock photo of the head: 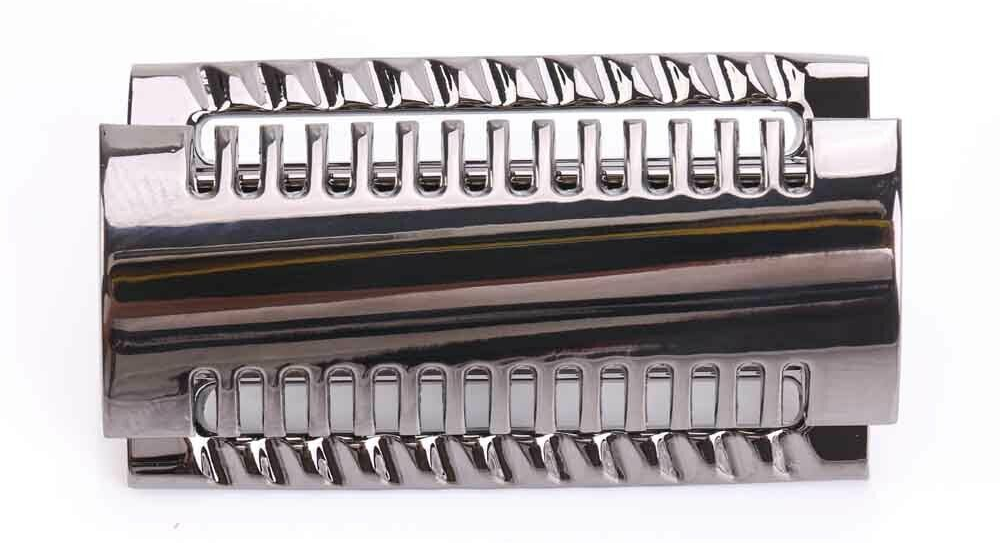 While it's true that this razor is not as scary as it looks, it's also true that it needs to be handled with some care. In many ways it is similar to the Muhle R41; you can get a great, close shave with it, but it takes concentration and forbearance. In any event, this morning I did a side by side shave with the Yaqi and my Karve CB. I have my Yaqi on a long stainless steel handle with some heft to it, so the razors were both fairly heavy. The Yaqi was up first, and as expected it delivered a great deal of blade feel and audible feedback. It wasn't unpleasant to use, but I've yet to hear anyone describe it as "buttery smooth." The Karve, on the other hand, is very smooth and comfortable. Cutting to the chase, after two passes and touch up, what were the results? A few hours post-shave, I have to say that the Yaqi side feels very slightly smoother. For the few dollars it costs, this is a head worth buying. If you're like me, however, you may not use it all that often.

Thanks for the comparison thread. I enjoyed reading your experiences.

Steve_in_CT said:
As to the Blackbird, I would still like a handle that was closer to 90mm, which they do not make. I think the 100mm handle would be just too long.
Click to expand...

the way the Blackbird design recesses the handle up into the base plate knocks at least 5mm off the “effective length” of the handle. Makes an 85mm really an 80mm, or so.

I agree - just slightly too short, but a much better option for me, over the 101mm long handle option.
You must log in or register to reply here.