Shave of the Life

“Shave of the Life”

On this night, in his loft rented less than a mile from the international event at a hotel on the east coast of the United States, Albert Wesker is preparing for his mission, and the first unified gathering of his esteemed colleagues; or to be more precise, his “siblings”.

The late Lord Oswell E. Spencer’s vision was coming to life…An advanced race of human beings by natural selection by ways of organic and man-made, genetically-altered viruses had begun nearly 40 years ago, and the initial stages are finally complete. A celebration immediately after the special event will happen tonight.

The Wesker Plan (named after its chief genetic researcher) has resulted in a great success thus far and the celebration it calls for is nothing short of grand among Albert and the other Wesker Children, however, situational protocol dictates that unwanted attention is to be avoided. For this reason that before any champagne corks are popped open, their celebration must be a private event at one of the hotel’s two-story penthouses.

He inspected his tuxedo and concluded that it looked as impeccable as it fit. His Umbrella cufflinks also showed no signs of blemish, remarkably considering their age. Albert’s oxford shoes were mirror-polished, completely flawless without scratch and scuff.

The main event with world leaders, ambassadors, other American politicians and business executives merely requires the cordial “meet & greet” and of course, moderate surveillance in the ballroom and the surrounding perimeter of the hotel.

Albert finished his vodka tonic and checked his watch. 2:50 PM. Right on schedule. He played Beethoven’s “Moonlight Sonata” on his stereo and undressed for a soothing, hot shower.

Albert put his ebonite badger-haired shaving brush to soak with warm water in his steel mug. He gently grabbed the brush for a moment and realized the potential of what a blunt-force trauma weapon of opportunity it is should a knife, his razor, or his pistol are not immediately available, and placed it back.

If Donatello himself had sculpted functional art such as shaving brush handles once upon a time, then this would be a masterpiece even he would marvel at.

When it comes to grooming, Albert has to give credit to Lord Oswell Spencer and he vividly remembers his tutelage; his voice engraved into his conscience:

“If a man is to make his environment a product of himself; manipulated by his choices and his actions, then to all the eyes on him, he must be a vision that is in control of his domain with a firm grip and that begins with personal appearance. Well-groomed! Razor-sharp, Albert, every hour of every day, rain or shine. Even in times of slumber and the occasional escapades of revelry, do you understand? This requires utilizing nothing but the best tools and I will make a few of them available to you. The rest is your responsibility once you have completed your training and of equal precedence…Your studies. You will learn to be resourceful in due time.”

Albert ran some warm water to bloom his tub of “Orange and Yuuuge!” shave soap. The title and image of the American President is rather comical enough for Albert to force a smile whenever he glances at it. A slight reminder of why he is here tonight. An illustration proving it’s all falling into place.
Most Umbrella Corporation operatives by tradition have been shaving with European soaps and creams for decades, but tonight calls for this shave soap and only this soap. One can’t argue with its formidable performance, either.

How ironic that the Wesker Plan was deemed a failure after the mansion incident & the obliteration of Raccoon City that followed when in actuality, this merely resulted as a trivial setback. Kijuju, Africa, too, where the Progenitor Virus was discovered. The “Stairway to the Sun,” as the Ndipaya natives called the flower.

Oh, how life has a comical way of disguising the great successes through the illusions of what appears as horrid, catastrophic tragedies to the masses. The world’s media as a whole can be thanked for that veil of irony over the world’s eyes, Albert concluded.

True potential for immeasurable success is found after all past mistakes are analyzed and such resolute is set in stone that they never rear their ugly heads again. Indeed, the Wesker Children have all been well-versed in world history obtaining only the greatest of educations from the world’s most revered institutions. Per their respective fields of expertise, histories of the world’s greatest empires, republics, and kingdoms is mandated for the Umbrella operatives with covert status and trained in espionage alike--The Wesker Children, especially.

The Wesker Children were placed on all seven continents these past several decades according to plan since the late 20th century. They would all congregate, celebrate, and reminisce the good times and the bad tonight—several of them finally meeting each other face to face after years of both direct and indirect collusion, and mission support. Old Lord Spencer, a man that was the true visionary of Umbrella’s three founders would be proud if he were alive today.

“Well, that’s certainly debatable. Hah!” Albert’s conscience tells him as he allows himself to smile and nod at that thought. The old man did after all meet his demise at Albert’s hand.

He turned off the shower water and dried himself, approached the sink and then glanced at his razor. From the nickel-plated pins on the scales to the edge of the blade, Lord Spencer had this straight razor tailor-made for him. With the company name & logo etched on the blade, of course. Engraved on the black juma scales of his Koraat razor are words that are but a constant reminder to Albert that he never forgets the roots of his purpose:

His razor’s edge is stropped and ready. Recently honed by razor maker and honemeister Ulrik Beyer himself, this shave won’t be anything short of smooth-personified. The feel of building the lather on his beard is nothing short of luxurious, almost therapeutic bliss combined with the ambiance of Beethoven, and the calming effect from his cocktail.

Albert wet his face with the bloom water from his soap tub and glanced in the mirror. He noticed a bullet scar near his collarbone and forced a half-smile.

“In and out, no problem,” he reminded himself.

Albert removed his Paladin shaving brush from the mug and firmly squeezed water out of the knot, loaded the brush with soap for several moments, and began to face-lather. This particular ritual in Albert’s grooming routing is his favorite. The ambiance of Beethoven, the texture of his brush building the lather on his his face combined with the relaxing effect of his cocktail—this is therapeutic bliss for Albert.

During his first pass of the 48-hour stubble, Albert conducted a quick mental checklist of tonight: Contact established with Frank & the other Wesker Children: Check. Mission: Surveillance of ballroom and accountability of all those in attendance: check. Discreetly-placed listening devices online and active: Check, even though Alex Wesker is an operative that needs not a reminding directive that the frequencies of their bugs not cross frequencies with that of the American NSA’s, still, Albert is the kind of man that likes assurances, but adores reassurances. It was Lord Spencer that first realized the brilliance of paranoia in Albert.

Furthermore, if that parameter of the mission tonight were compromised, Albert and the other Wesker Children wouldn’t want their sibling, Vladimir, disappointed. He tends to make unwanted headlines when he is distraught.

Most recently worldwide perhaps, among other things, the occupation of Ukraine. Festivities with fellow Wesker operatives in penthouse set for midnight: Check. Confirmation of rendezvous time from the hotel at 12PM: Check. One-way flight reservation to Moscow for 3PM: Check.

Even with the mission tonight, this is what American Army Air Force World War 2 bomber pilots would have called a “Milk-Run.” There will be much less required of Albert’s talents compared to prior missions, for sure, but still no reason for Albert to let his guard down.

That old cliché has no place in Albert’s life. “Expect nothing” are two words Albert lives by. Far-less catchy perhaps, but once fully adhered to, it’s a guarantee nothing will ever surprise him. So many questions have been asked by the world’s population with eyes on America--Questions asked by both Americans and citizens of the free world since the night of November 8th, 2016 and thereafter:

Did it happen again? An American President elected without the majority of the popular vote? How? Umbrella.

Of all people, a businessman of whom failed time and time again and had even filed bankruptcy several times? Why? Umbrella.

The oldest president ever elected with zero experience in politics, whose seat is that of the commander in chief of the world’s most advanced military? How? Why? Umbrella.

An aging, megalomaniacal sociopath of whom causes & creates contradictions and chaotic stories of epic proportions in the American capitol in such rapid succession and whose social media account and all stories outside social media are far too exhausting to keep up with…Elected president of the most powerful nation in the world? Who has been pulling all of these seemingly countless strings? Umbrella.

Umbrella and its Wesker Children is the one, true answer to these questions and many more related as such.

Albert finished his 2nd and final pass, rinsed & wrung out his shave brush, wiped his face and his razor blade dry, and applied his favorite aftershave--the timeless eucalyptus menthol blend of Proraso decanted in a nice Avon globe. A gift from Lord Spencer long ago.

Relax and enjoy life. The Wesker Children have everything under well-calculated control.

It’s all part of the Plan.

Kenneth Lynn & family of Dark Holler Shaveworks, LLC and Ulrik Beyer of Koraat Knives—As Machiavelli once wrote in “The Prince,” these are two entrepreneurs of whom see little difference between obstacle and opportunity, use both to their advantage, and made my dream come true. Humble & sincere thanks to both of you.

Jose Francisco Ibañez Moreno for parting with the Paladin Ebonite brush—I waited over a year for that day! Thank you, sir!

The Razor & Brush Group on Facebook including Zach Plevritis & Chris Cullen for their generosity and hard work; Election Thread 2016.

If you took the time to read this story from start to finish, I tip my hat and sincerely thank you for taking time out of your busy day or night to do so.

This story was no cakewalk and while I experienced bouts of fatigue organizing my information, thoughts, and shaving gear, the final product was well worth the effort. These few pages took literally (pun much? Oh wait, that’s “literarily” ) took over two years for me to complete.

I hope you have enjoyed. Stay sharp, my friends. 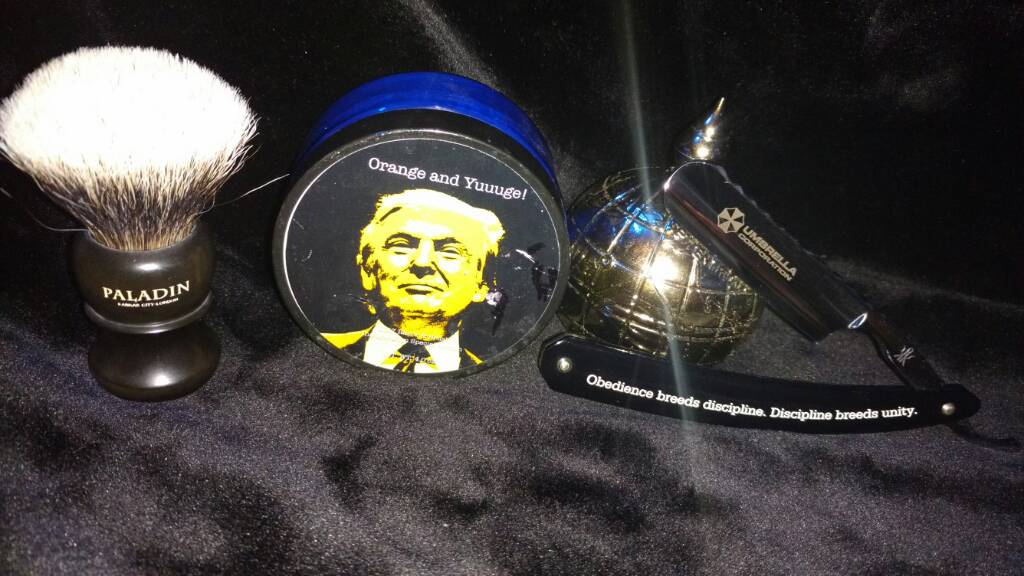 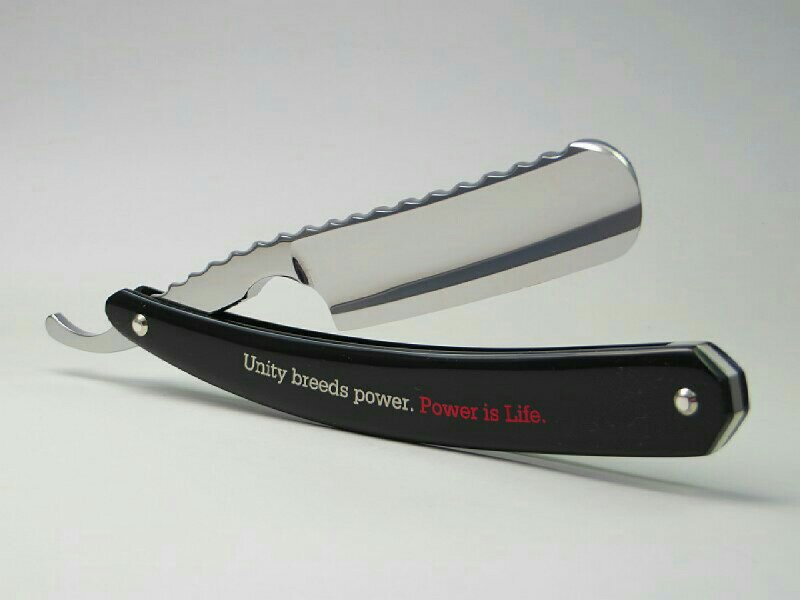 Sent from my XT1565 using Tapatalk

That's quite a story.

ackvil said:
That's quite a story.
Click to expand...

Yessir, took me a while.

Sent from my XT1565 using Tapatalk

Sent from my XT1565 using Tapatalk
You must log in or register to reply here.

A life time opportunity that only happens for very few!
3 4 5