Based on 1) price, and 2) some reviews here, I picked up a 100 pack of Sharks. I figured that it was about the same price as picking up a single 5 or 10 pack from CVS, so I wouldn't have an issue with disposing of them.

First shave with one was tonight. Arko, lathered on the puck (squash) with plenty of water, 40's SuperSpeed. I did _not_ take any special care with the blade or razor, and had two days of growth. I just did a normal quick two pass shave without paying any real attention to the blade angle.

Good shave. No nicks, the Aqua Velva burned a bit, but no real residual pain, BBS in a lot of spots, but mostly just a good shave.

For (mostly) the women, I'll say that the Shark and this razor are FANTASTIC for the underarms. (Due to body chemistry, I shave those reasonably regularly, which keeps the odour down or eliminated) I had ZERO issues running the blade quickly across the armpits, even though I didn't bother with a brush or Arko, and just lathered up some Shugar Soapworks Oatmeal and Verbena soap. If nothing else, I may leave a razor in my shower loaded with a Shark just for that reason.

I'll use it again tomorrow or the next day and see how well it works out for a second shave. Then I'll either put it in another razor, or switch to a different blade and repeat the test - probably one of the 'maybe' Dorco's from Dollar General/Family Dollar.

There is a lot of love for Sharks but it is one of those blades that didn't work at all for me and that I almost considered replacing mid shave. I did think that the Super Chrome was marginally better than the stainless variety though. The good news is that if this blade works well enough for you, then there are a lot of inexpensive blades that will also perform well for you.

Funny enough, I tried the Shark out for the first time last night as well. I noticed that it seemed to tug on my face a bit more than the blades that I normally use. I didn't get any bleeders, but my AS gave me a bit more sting than normal. Overall, the shave wasn't as smooth as I would have liked, and didn't give me BBS after 3 passes on my neck. I'll give it another try tonight, but if it gets any worse, I'll switch it out.

@Bookworm
So which blade did you use for your first shave, the Super Chrome or Super Stainless? They are two different blades... I use the Super Stainless in most of my razors and is the only blade to date that I bought a 100/pk of. I have a couple Super Chrome to give a try as well as the Lord line of the same blades.

Yellow package, but I wrote _exactly_ what was on the blade. Apparently they're Super Chrome/Super Stainless, which I thought was odd.

I'm not a champion of these blades, but there is certainly nothing wrong with them, use them once, throw them out, they work great .... seriously, they are comparable to most blades with the exception's of the super sharp Feathers and Kai's ... adequate
M

Bookworm said:
Yellow package, but I wrote _exactly_ what was on the blade. Apparently they're Super Chrome/Super Stainless, which I thought was odd.
Click to expand...

Mine have separate markings the same as all I've seen in the wild...

The Shark SS was my first 100 blade buy. I based that purchase on the price $8.50 plus the positive reviews of the blades on Amazon. The blades are a good choice for the beginner (which I was). I noticed that I can usually get 3-4 shaves before the blade dulls.

For the person that asked - They're supposedly Super Chrome, but here's a picture of the wrapper and the printing on the blade. As you can see, they're Super Chrome Super Stainless. 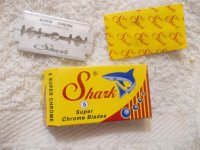 Thanks Bookworm... It looks as though the one you have are the Super Chrome. I believe the blade itself is stainless but the edge on it and the plating is chrome. Yours is the 1st I've seen that have both stamped on the blade though...

I thought it was rather confusing, myself. Maybe they're trying to convince people they only have one line of blades?

Ironic I would see this post today. I was traveling overnight and this morning I used a Shark Chrome with a couple shaves on it that was in my travel kit with a pre-war Tech. A nice, mild, and efficient shave.
M

@Bookworm
How are you getting on with the Super Chrome blades? I have been testing one in my 37C, (which I used this morning), and am 4 shaves in on it and am finding it to be pretty much in line with my experiences of the Super Stainless blades that I purchased 100 of a while back... I normally get 7-8 really smooth shaves out of the SS blades and wondering if I will get the same from the SC... Anyway, my very smooth shave this morning reminded me of this thread and was just wondering if you had any other thoughts to add from the original post?

Sorry for note updating. I did do another shave with the blade, and it was okay, but not quite as good as the first. That might more have been me than anything else. I'll try another one later, but I need to work through some of the variety of others I'm testing out. I think I have another 15 to test.

I am a fan of the Shark blades. Either one. They give me a BBS shave with 3 passes. No irritation, just buttery smoothness.
G

Sent from my SM-G930V using Tapatalk

My first shave with a Shark Super Chrome.

A vendor was kind enough to bundle some blades up with a razor I had purchased, among them the Shark. Loaded it into a Gillette Super Adjustable, short handle, set to 2. The shave was audible and felt a little tuggy, but smooth and no alum sting. Not sure I've ever felt tug like this from a blade on its first shave. However, as long as the shaves are irritation free, I'll keep using it. I'll up the setting on the Gillette and see how it performs.

muzichead said:
@Bookworm
How are you getting on with the Super Chrome blades? I have been testing one in my 37C, (which I used this morning), and am 4 shaves in on it and am finding it to be pretty much in line with my experiences of the Super Stainless blades that I purchased 100 of a while back... I normally get 7-8 really smooth shaves out of the SS blades and wondering if I will get the same from the SC... Anyway, my very smooth shave this morning reminded me of this thread and was just wondering if you had any other thoughts to add from the original post?
Click to expand...

I'm currently shaving with a Shark SC (from a sample pack). I love the Shark SS blades and generally get 4 good shaves from them. For me (and YMMV), shaves 1 and 2 were excellent, but shave 3 (this morning) performance has begun to drop off, still a good shave but am feeling the tell-tale signs that the blade is just about done.
M

I recently participated in a pass-around for a Supply Provisions razor and had not used my DE's for a week and definitely was missing them. Yesterday was my Piccolo w/ Shark SS and today was my 37C w/ Shark SC in them with 4 shaves on each so these were shave #5 on both and was quite impressed as neither one show any signs of slowing down at the moment. They are just as sharp feeling and smooth as shave #2 was and look forward to at least 3-5 more shaves on each one going forward...
You must log in or register to reply here.
Share:
Facebook Twitter Reddit Pinterest Tumblr WhatsApp Email Link
Top