Today I was not having a good day. Then I shaved, and thought of nothing but the shave, and came back to the world in a much better frame of mind.

I used a large kamisori. It is still Big Razor Month, after all, even though I used a small kamisori on my trip, because I could not bear to risk the loss of any of my large razors.

Also, I used, for the first time, Aqua di Parma. It says it's a shave cream, but either mine had dried a bit (not likely, the way it was sealed), or it's really a soft shave soap that lathers quickly.

Not a fan of menthol, and either there's some in there, or something else like it to make my skin feel menthol-y, just a little.

Dilute it as I might, I couldn't get it to stop providing a cushion, which is not a good thing when shaving with an SR. Also it was less slick than I wanted. I suspect that both of these were related, and that there is some way to get it to do what I want.

Despite a very comfortable shave, other than a bit of sticking on the cheeks, I've got some redness, not from the action of the razor as far as I can tell. It seems like my skin is voting "no" on this one.

Herrenberg said:
Today I was not having a good day.
Click to expand...

Hope you're doing better and reached a bit of a even ground.
H

linty1 said:
Hope you're doing better and reached a bit of a even ground.
Click to expand...

Oh certainly. It was just an off day, no big deal, everyone has them. It sprang from worry about a venerable relative who has moved to my area and is now, to some extent, in my charge. Even though he is well-settled, concerns for him to have the best possible life have kept me up at night. Didn't expect that particular side effect.

Still in and have been shaving.

I’m heading to our cabin in the UP of MI. Any Yoopers in this thread…we love your state (specifically the UP) and plan to fully retire there. You’ve been lucky to live there. Trust me, we’ve lived all over the world and the UP is our favorite. It is heaven for us. 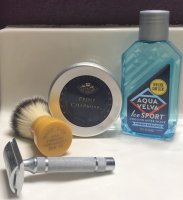 Dug a few things out of the drawer that haven’t seen daylight in awhile. This is my Gillette Heritage, and it had a Spoiler of indeterminate usage in it. I also found one of the two tins of Zartgefühl that I got from TSS last year. This one is the older formula of Prinz Charming (has palm oil) and I’d never used it.

Those of you who have seen this company’s soap know it is a little different. No big lather but very slippery and wants almost no water. So that seemed to call for a synth, and I dug out this travel brush.

Everything went fine until razor touched skin. It tugged. Guess that Spoiler was done. I swapped in the Platinum Plus (3) out of my Slim and that worked much better. Maybe I’ll keep trying those blades with this rather mild razor. Turned into a good shave. Skin is nice and soft.

I hope I actually use up that AV before the end of the month. It’s not actually looking like I’m on schedule for that.

Contributor
Gentleman I’m out!
Fear again got the better of me. With the confirmed news of Speick going tallow free I snatched up a couple of sticks.

In the spirit of GRUME I decided to have a go at using my virtually unused bowl, that came with my Anbbas brush. It's a bit too small to ever facilitate a "show your lather" post, but just big enough to load the brush. 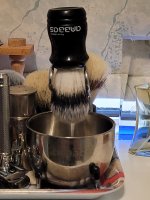 The Frankenrazor, a combination of ESC Braveheart head with Razoremporium replica ball end handle, produced a nice bbs finish with a couple of cuts to the mustache area.

So far this GRUME has gone well for me, I'm optimistic about actually finishing this time.

Edit: oh and if anyone is wondering what is in the travel tube, its a 1920 Gillette boar brush that I've not yet worked up the courage to use.

You really have had extraordinary and consistent success in these GRUMEs. Congratulations. What's your recipe for GRUME success?

Multum in parvo said:
Gentleman I’m out!
Fear again got the better of me. With the confirmed news of Speick going tallow free I snatched up a couple of sticks.
View attachment 1333966
Click to expand...

I'll admit that the thread that @old_school posted set off an alarm and sent me Speick shopping, too, as I've only got one unused stick. But when I went into the giant box to retrieve that one Speick stick I saw the 30+ sticks pf Palmolive, the 10 or 12 Arkos, the big blue pile of Wilkie sticks, a few scattered La Tojas, and over a half dozen Valobra and assorted DR Harris sticks and I came to my senses and shut down the browser window, my wallet intact.

Multum in parvo said:
Gentleman I’m out!
Fear again got the better of me. With the confirmed news of Speick going tallow free I snatched up a couple of sticks.
View attachment 1333966
Click to expand...

What? I haven't heard this, are you serious about a formula change?

cryhavoc said:
What? I haven't heard this, are you serious about a formula change?
Click to expand...

Got one more shave out of this Gillette Silver Blue blade in the red tip Super Speed; a Zenith boar brush and Williams Mug Soap; finished up with a little CeraVe moisturizer and a great big splash of Stephan Bay Rum. Still in.

Contributor
Still in and a great BBS shave today!

I must admit this news about Speick has me seriously thinking of purchasing some Speick sticks, even if it kicks me out of the GRUME and GRUYERE.

After 3 shave with an Astra platinum and major post shave irritation, I dumped that still usable blade and grabbed the once use Bic chromium. So far so good, 2 more shave in September ... how many total on that Bic is the question, the voshkod since to be good for 7 shaves

see you all next month

Contributor
Still in! Saturday morning shave, bowl lathered using TOBS St Jermyn cream, followed by a 3-pass DFS+ shave using the iKon X3 with a new Astra Platinum blade. The iKon is my only DE and a backup to my daily driver, the Vector.

The shave was super smooth, but also inefficient. A lot of buffing during the shave and some clean up post shave, particularly under the nose where the iKon can’t reach.

6 more days to go until I get to pay for a Tatara Masamune, which I hope will be more efficient than the iKon.

Loaded a once-used Astra, and got another near-ideal shave.


Owen Bawn said:
You really have had extraordinary and consistent success in these GRUMEs. Congratulations. What's your recipe for GRUME success?
Click to expand...

I was talking about my winning streak of surprisingly good shaves with this razor (open comb Game Changer .68), but being content with your kit has to help with shopping urges too. Unless there's something pretty radical out there, any improvements for me would be marginal.


cryhavoc said:
I must admit this news about Speick has me seriously thinking of purchasing some Speick sticks, even if it kicks me out of the GRUME and GRUYERE.
Click to expand...

Reformulation or discontinuation anxiety does bother me. Is this tallow-removal a trend, or just random lightning that has hit two soaps close together?

I never tried Tabac, and can take or leave Speick (good performance, only so-so post-shave). On the other hand, if de-tallowing is a trend, I'll need to stock up on several current-formula Mitchell's Wool Fat refills, and maybe more Palmolive sticks. 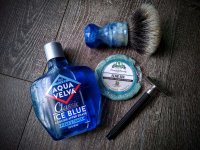 I planned a break in October as it has some deals that might interest me but since I already defaulted in September, no purchase for October.


Roedeer said:
Reformulation or discontinuation anxiety does bother me. Is this tallow removal a trend, or just random lightning that has hit two soaps close together?
Click to expand...

I think Speick is the third in the trend: Fine soaps lost their supplier (arguably the same formula as Tabac), Tabac, and now Speick.

I hope MWF doesn't follow in their footsteps and surprise us with a formula change, given that Britain is out of Europe and doesn't need to follow the trend.
Last edited: Sep 25, 2021

So far this month I have ordered and paid for:
That should do me at least until the end of the month.
You must log in or register to reply here.

A moment ago
Owen Bawn