That RCAF dopp kit has me DROOLING. Googles "Red Canoe".

And I need to run over to the Captain's website and order the razor cover - just learned my tax refund is going to be nice this year so I have an "excuse". LOL.

Has me wishing I won the lottery and could buy one of everything at that site.

Apologies for the delay of this review Gents. I have a small DE collection, but there is a combination of handle and head sizes. Most are vintage, but I do have a RR Mamba that I tried as well. 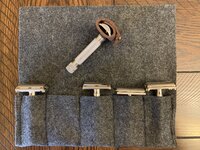 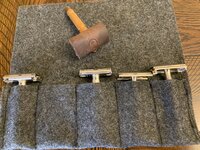 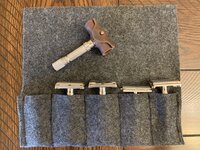 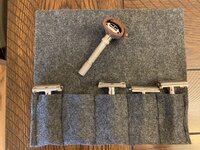 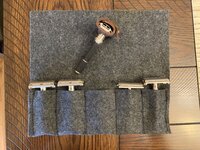 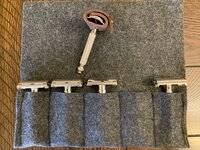 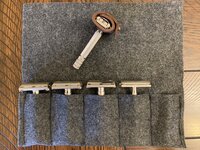 This cover didn’t have any issues with the larger TTO heads or the larger handles. I really like the design simplicity and the versatility of this product. I also really like the use of leather for this application, it’s just a classic material

I can’t find anything that I would change, I really liked it and would buy one. I think this will be a winner Thank you Scott for the opportunity to test this!

Vendor
With the pattern of the Razor Jacket settled our artisan has gone to the next step. If each of you look closely at your Razor Jackets you will see that they have been cut by hand. There are slight differences that indicate such. So those sent to you will be ones to hang onto. From now on they will be cut by a mold as seen here in the pictures.

The artisan first cut out the shape of the pattern on wood. Then he has formed the metal mold around the piece of wood. That shiny part of the metal is the cutting edge. So from now on he will place that mold down onto the leather and hammer it home until it punches through the leather. There will be sharpening involved, of course, but this will deliver a consistent size and symmetric pattern as we move into production. 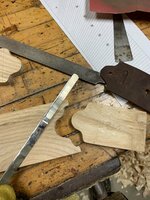 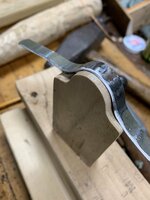 Sorry for the delay but the package just arrived yesterday. I don't have a huge selection to choose from so I tried it on 3 different sizes. On the Rockwell 6S, I had a difficult time putting the cover on; it was the first razor & to be expected with new, stiff leather. Subsequent fittings got easier. My one comment on this cover is I would not put it on with a blade in the razor. While it fit very well & did what it was designed for, it would be too easy to get cut from the blade ends that protrude outside the razor head. I found I had to hold it by the ends at times to get the cover fastened. I tried it on 2 other (RazoRock Baby Smooth & a Lord - great for a quick trip) without any difficulties at all. The cover fit very well & was easy on/easy off. I realize that this is just the prototype but I would have liked to have seen the edges burnished. I'm sure that the finish product will some type of leather treatment as well. The product does what it should & is very handy for traveling (something I hope will be on the rise in the very new future). Would I buy one? Maybe down the road. I currently use the leather sleeve that came with my Rockwell. I find that one easy to put on & easy to store. Another great idea from the Captain! I have to thank Scott for allowing me to try this new product. I had previously checked with Scott and another member who asked to be included in the group and decided to pass the prototype along to someone who did not get in the selected group so that we can get more opinions. With the speed of the USPS, it could be a while before we hear from that individual though.

Rockwell 6S; second shot shows the blade overhang on the head that you need to be careful of 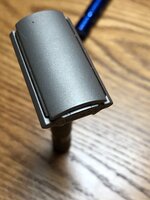 My cover arrived today after taking five days touring the Chicago postal hub. I had already lined up a bunch of razors with differing size heads a couple of days ago and so immediately started trying out the cover on all. 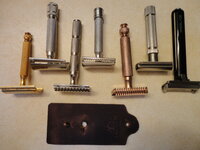 If the slant in the middle of the group looks familiar, that was the one the Cap had on BST last week. Unfortunately, as the Cap already warned, the two slants in the pic did not work with the cover, although the two adjustables with thick heads did very well (the PAA Ascension and Rex Ambassador).

Of course the Tech and Mamba clone had no problem at all as they were the thinnest of heads, and even though the Mamba clone was a wider head because it covered the blade tabs, it did not protrude past the cover. 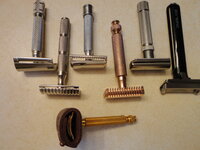 The OneBlade surprisingly fit very well. I thought the handle would be a problem, but it was not and it protected the head well. Of course, I had to take the blade out for this one (the others did not have a blade loaded either).

In all my testing, I realized that I had forgotten about trying a TTO, and my Gen 3 Aristocrat was on deck fr tomorrow's shave, and so it got the honors of being test covered. It worked extremely well, which is a good sign just in case I decide to take my Aristocrat as a travel razor one day (which I won't). 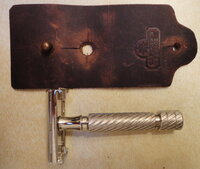 Finally, I thought I would give my latest new razor a try to see if the cover would work. Halfway up the handle, I realized it wouldn't. 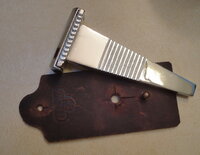 Overall, I would have to say that I was impressed by the simplicity of the cover. Ease of use was excellent and it served it's purpose very well. I am not sure if I prefer this design to the other design where two pieces are stitched together to form a pocket that just slides on the head, but that type of a design requires more steps in the process.

Would I buy one for myself if I didn't get this one for free? Probably not as my travel razor has always been a Gillette Guard just to pass through TSA without any problems (and this COVID thing has more or less stopped all my travel for the past year and foreseeable future). I know many of you insist on using a DE razor as a travel razor, and so this would be a great purchase to protect your razor (unless your travel razor is a slant).

Thanks Cap for once again allowing us to test your latest creations and for selling me that wonderful slant (even if the cover doesn't fit).

Wish I could qualify. Looks like a great product.

Vendor
Thanks Guys, for the feedback - keep it coming for those who have not yet had a chance to weigh in.

Based on other feedback we have modified two items. One is the self adhesive cover on the backside. It is now larger in diameter and thinner. Hard to see in the pic but now this will wrap around the head of the razor more easily. Secondly, the metal stud you have is copper which is not cheap. We have a few more in copper but will then likely be switching to antique brass which looks terrific.

The first pic here shows the new adhesive cover to protect the razor on the backside of the stud.

The second pic is a shot of just four of the Razor Jackets but these were all stamped out with the new mold and so match each other exactly. You just have got to love that weather beaten finish to the leather. Looks like they could be vintage even though they were just made.