Recent acquisition: the one-year guarantee for 38 blades implies that I should expect about 10 shaves per blade. Anyone ever tried to do that? Or tried these blades at all? 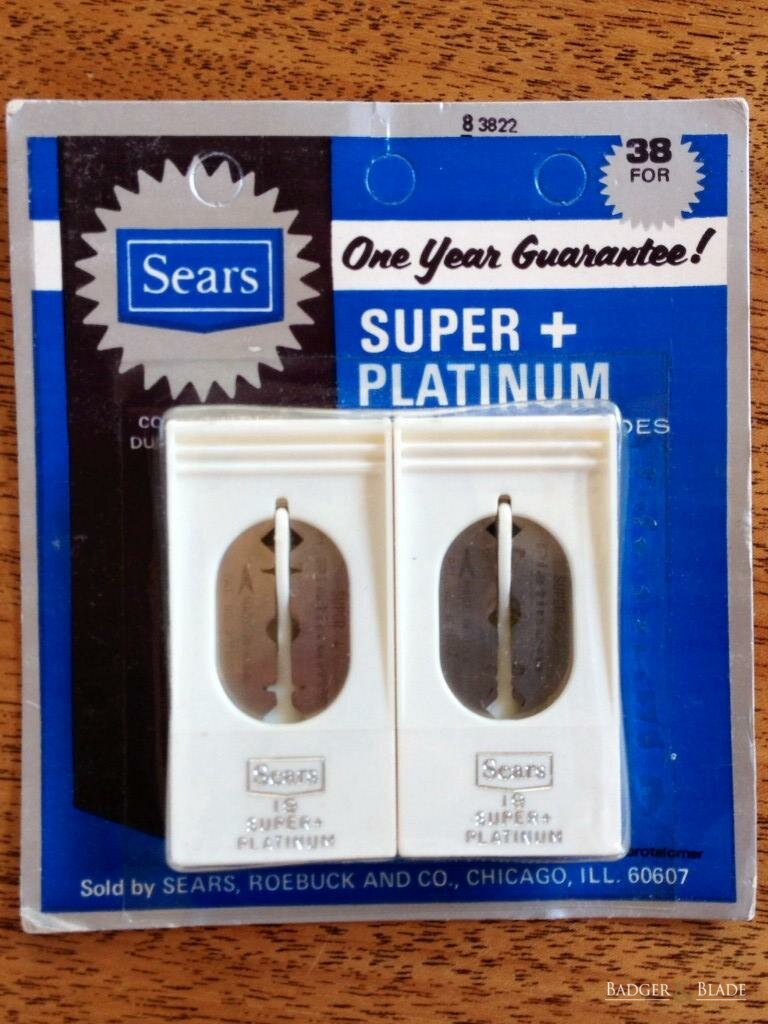 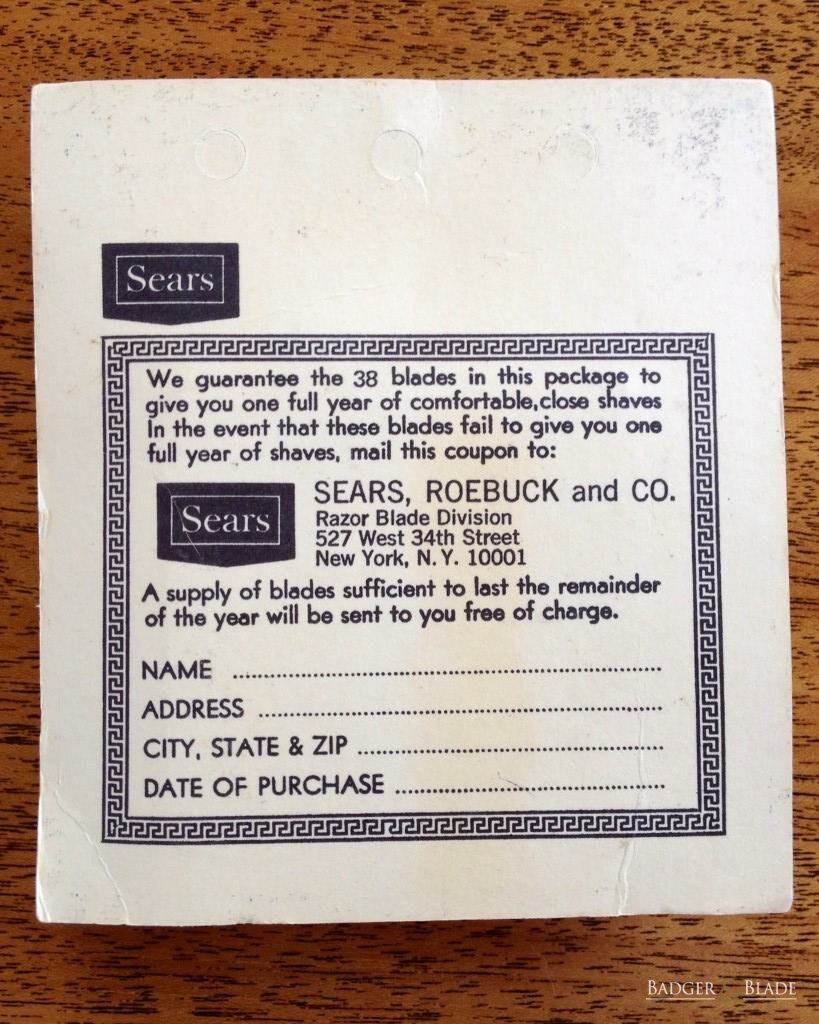 Printing on the blades reads "Made in USA" and references US3071856 so I guess they were made sometime between 1963 and 1980. I think platinum coatings appeared ca. 1967, so that narrows it down a bit. No other markings that seem to help, but google books tells me that they were listed in the 1971 and 1973 Sears-Roebuck catalogs. The 1971 catalog actually seemed to offer 38 blades as a two-year supply, so that may place them ca. 1973. After that Sears probably noticed that the market was shifting to disposables and cartridges, not to mention electrics, and dropped the product.

My guess is ASR/Personna made these: if so they would be the generation immediately prior to the famous P74* blades. Like many vintage DE blades in slider packs, the lubrication is completely stuck and the blades will not slide. Happily the middle portion of the plastic blade pack is easy to remove, so I should be able to free the blades with mineral oil or alcohol.

The guarantee is a nice idea and I am tempted to send in the coupon. But there is a catch. If I did not like the original 38 blades, why would I want more of the same?
Last edited by a moderator: Feb 8, 2017

Google Books shows that address had a small razor blade seller called U.F. Industries...... Also, U.F. Industries had a trademark on the Twin II razor. Putting that into google books shows that they did have a plant in the U.S. in the 70's. Also, they had some labor relations cases, as they were importing blades from Wilkinson Sword, apparantly to replace U.S. production..... https://www.google.com/search?q="twin+ii"&btnG=Search+Books&tbm=bks&tbo=1#q="twin+ii"+razor&tbm=bks
Last edited: Dec 15, 2013

Thanks. That would fit in with some similarly packaged blades I already had, made for the USA chain Albertsons but labelled Made in England. The only problem is that the last time we discussed them the consensus was ASR: http://badgerandblade.com/vb/showthread.php/186238-Albertsons-NOS-quot-Made-in-England-quot. But the slider pack looks quite similar. If the Albertsons blades are ASR and the Sears blades are UFI, any idea why the packaging is so similar?

EDIT: Here are the images of the Albertsons Made in England blades from that thread. There is a UPC on the outer package, so these are obviously later than the Sears blades. That seems to fit with the UFI-Wilkinson idea.

Whatever number you get out of it those blades are just cool.
Cool dept store too.

Thanks for sharing this! It's sad they're not made anymore. 38 blades per year and no YMMV clause!

Maybe the day will return that DE blades become ubiquitous once again. If that day comes, hopefully prices will be reasonable too.

Well, keep in mind that Sears may have regretted this offer. Considering I only managed 14 shaves with a P74*, I am keeping my expectations safely low.

But the first shave with the first blade went pretty well, lather courtesy of Calani soap in stick form. I thought the blade felt a little less keen than I prefer, but three passes left me with a DFS.

When I looked up their old address, I found that it matched the address that used to be given for Perma-Sharp, Manufacturing Corp, USA. This old article mentions that Perma-Sharp was acquired in 1966.*

*correction, this article refers to the Australian factory.


mblakele said:
EDIT: Here are the images of the Albertsons Made in England blades from that thread. There is a UPC on the outer package, so these are obviously later than the Sears blades. That seems to fit with the UFI-Wilkinson idea.
Click to expand...

I have the exact same Super + Chromium blades in the same style dispenser. They are Century branded double-edge razor blades though. On the bottom of the display hanger it says, Dist. By UFI Blades New York, N.Y. 10001. The backside of the blister packaging has made in England printed on it, and it has same shape perforation marks as those Albertsons.
Last edited: Dec 17, 2013

It's interesting that there would be a Razor Blade division in itself and that speaks to how much corporations have changed! Now it would be more like Grooming, Gardening and Home Products Division.

When I looked up their old address, I found that it matched the address that used to be given for Perma-Sharp, Manufacturing Corp, USA. This old article mentions that Perma-Sharp was acquired in 1966.*

*correction, this article refers to the Australian factory.

I have the exact same Super + Chromium blades in the same style dispenser. They are Century branded double-edge razor blades though. On the bottom of the display hanger it says, Dist. By UFI Blades New York, N.Y. 10001. The backside of the blister packaging has made in England printed on it, and it has same shape perforation marks as those Albertsons.
Click to expand...

Good stuff, thanks. The situation seems to be confusing because the Perma-sharp or Permasharp brand could be under different ownership in different countries. We have also also discussed the Permasharp factory in Scotland, which may not be related.

As you pointed out that article from The Age seems to refer to a factory in Mentone, Victoria, Australia. We know Gillette was making Spoilers in Australia, so they had direct competition. But the sense of the 1966 article seems to be that "Email Ltd" - an Australian company - was in the process of spinning off these assets into a new "Perma-Sharp Manufacturing" holding company based in NY. A source from 1974 seems to confirm that the Australian and Israeli companies were owned by the NY company. The New York company can be traced as far back as 1955, apparently supplying sample blades to Marlin.

The second source is dated 1983 and reads "Perma-Sharp: See UFI Razor Blades" - suggesting that UFI bought the Perma-Sharp NY company some time previously. Apparently this happened on 1972-08-01: "Perma-Sharp Manufacturing Corp (N.Y.). Name changed to UF Industries Inc. 8/1/72". It seems unclear whether this was an acquisition or a restructuring of some kind. But either way the Sears blades were probably made shortly after the transition to the UFI name. That fits with my earlier placement ca. 1973.

The case posted by haiti222 confirms that Wilkinson acquired UFI in 1976 and "not long thereafter" began to reduce production at a NYC factory, supplying existing customers by importing from Wilkinson UK. It looks to me like they kept the NYC plant open for some purposes, but no longer made blades or cartridges there. So it seems likely that the Albertsons blades were made by Wilkinson UK, imported on spindles, and packaged at the UFI factory in NYC. That fits with the "Made in England / Packaged in USA" text as pictured.

None of this explains why previous discussion at http://badgerandblade.com/vb/showthread.php/186238-Albertsons-NOS-quot-Made-in-England-quot reached a consensus that these were ASR/Personna blades from a Scotland plant. I suppose it is possible that UFI imported and packaged some ASR blades, but it seems odd in light of the labor dispute and the ownership by Wilkinson-Sword. At the moment I am leaning toward mistaken identity: that the blade pack looked superficially similar to a Personna pack. But the vintage Personna packs I have seen were designed to slide blades both ways. The Sears/Albertsons/UFI pack dispenses only in one direction. At one time Wilkinson also sold a one-way slider pack, though it looked much nicer. Anyone have an image of a one-way ASR/Personna blade pack, preferably in cheap plastic like these? EDIT: I have now seen examples of Personna dispensers that look to be one-way. They still look different, though.


StubbleTrouble said:
It's interesting that there would be a Razor Blade division in itself and that speaks to how much corporations have changed! Now it would be more like Grooming, Gardening and Home Products Division.
Click to expand...

That sounds like Wilkinson in the 1960s. Their stainless DE blades were originally meant as a promotional product for their gardening tools. However nowadays a completely separate company makes the garden tools, under license from Energizer Holdings.

I think that we had no idea that Wilkinson Sword entered the U.S. private label market in such a big way. Also, the Made in UK, packaged in US setup was only in effect for about 5 years or less. I think it's clear the Albertson's blades are repacked Wilkinson Sword blades, which would explain why they are so good.

Makes sense, although I am not ready to give any medals to either of these blades. The Sears-Roebuck blade did pretty well on its third shave, still using Calani soap. But even on the first shave it did not feel particularly sharp to me. From what I remember of the Albertsons blades they treated me about like an Israeli Personna: smooth enough, but not quite as sharp as I like.

Regrettably I forgot to put the Sears-Roebuck blade under the scope before I shaved with it, but here is the next one from the same pack. Note the grind divergence in the second image: I wonder what would cause that?

Here is an image of an Albertsons "Made in England" edge. This came from a sealed pack, but note the rust spots and the irregular coating. That may not affect the performance of the blade, though. 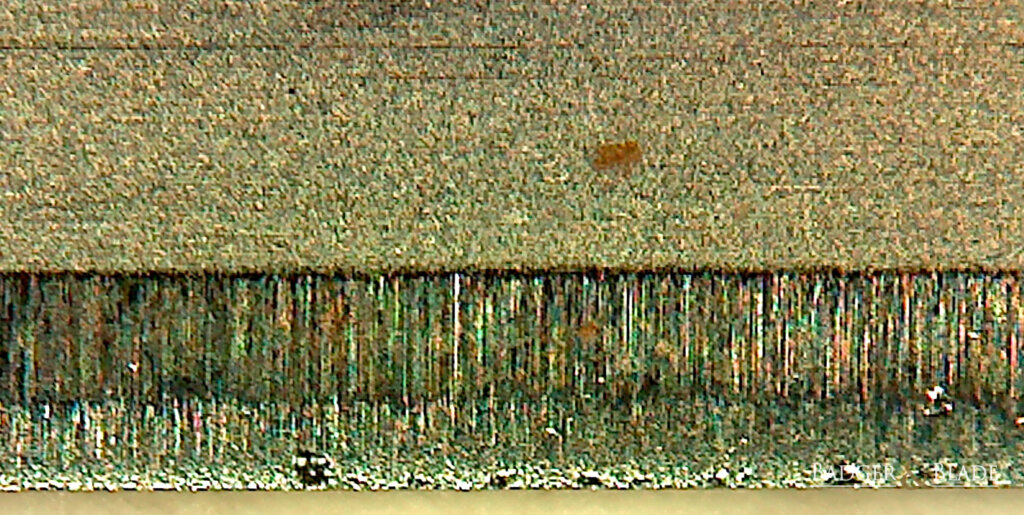 Behind the grind, the unsharpened steel looks very different between these two. I do not have the right equipment to investigate the grain structure, which might be interesting. But in general I think the Albertsons blade looks more typical of modern blades. The PermaSharp/UFI folks may not have been playing at quite the same level as the competing major brands.

I will try to remember to look at the used edge on the Sears-Roebuck when I unload it, and then maybe shave with the Albertsons blade next. Somewhere I might also have some English Wilkinson blades from roughly the same period, for comparison.
Last edited by a moderator: Feb 8, 2017
You must log in or register to reply here.