Am I missing it or has anyone made a list of Schick injector blade history? I'd love to find out when the collection I have was made or was being sold. I have 8 different vintage blade injectors. Any info on them would be great. 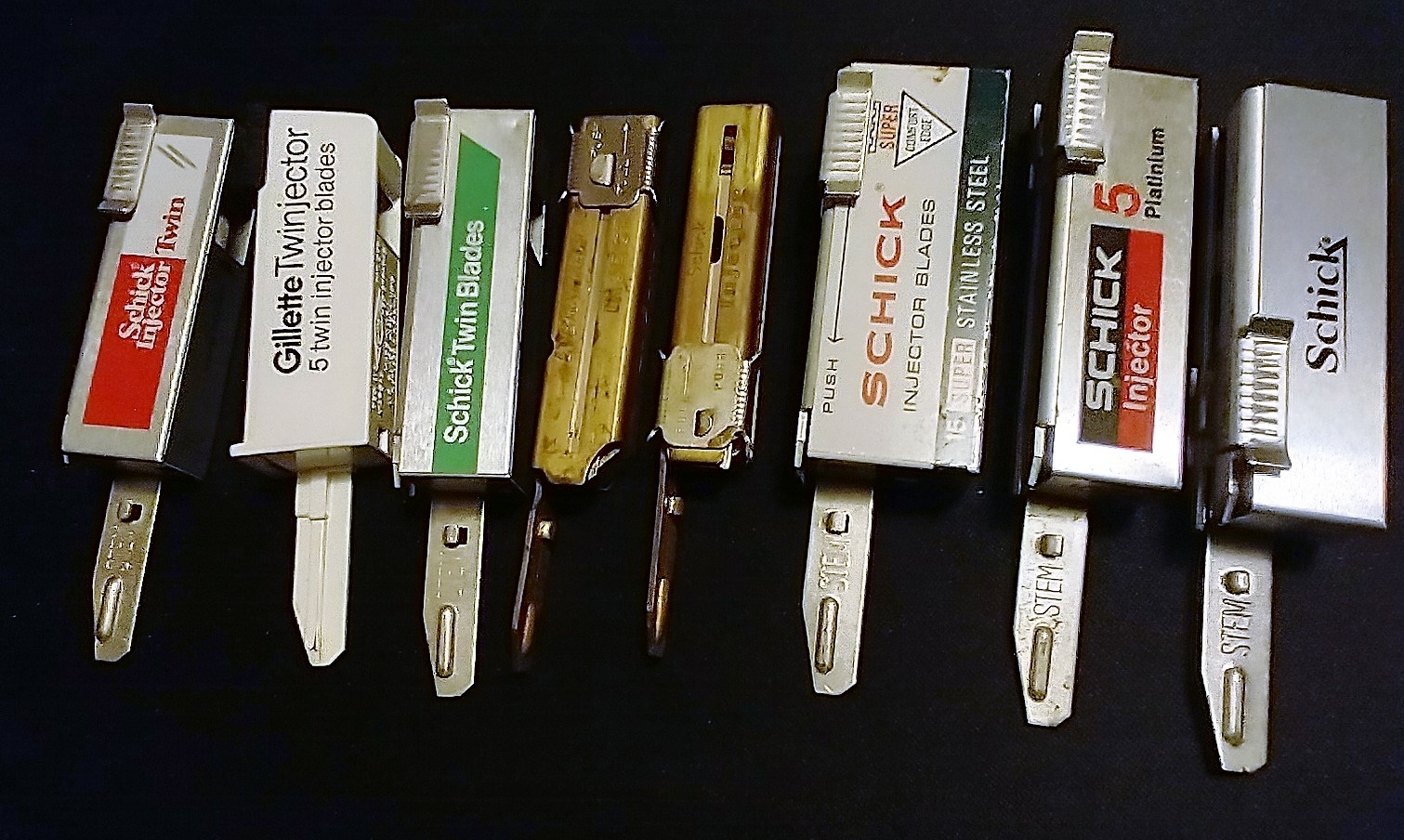 I'm guessing that if I could read/find pat#s I might be able to find when they were granted. But I thought someone might have done this once before me. Thanks for any help. BTW, The two oldies in the middle, one says Schick, and one says Eversharp. Cool! I would never try to shave with these but it was fun finding them.

I survived a lathey foreman

The Twin blades where designed for the L type injector models and later up to O types, the last one is that just says Schick I believe is the more modern one(aka-SChick) The brass magazines I would not even use because they are very old and dull, don't use these because it might turn you off from using your Schick injector razor because that almost happened to myself. I recommend using some new Schick blades that come in a yellow package of 7 because they are very good product. Personna SS PTFE injector blades are also very good that are still made in the USA and I buy mine from Connaught shaving UK who have sales marketing agreement to sell them and are priced very good even considering mail postage(good folks to deal with IMO).
Some helpful information on Schick injectors that will help others(time line chart with some photos).

A technical page on Schick Magazine and Injector Razors
www.safetyrazors.net
Hope this helps you.

Thanks for the link. I tossed in the newer blades just to show the difference of injectors as they are the ones i use. Using the brass injector blades id never think of doing. Just way too old. But still cool that they still hold the blades that came with them.

I will do dome more research and figure out when these different enjectors were made in the near future and post up the info just to share. And i will keep my eyes open for others i dont have.

Can't help you with the timeline, but I have some additions:

Difficult to tell the year but it is (almost) doable to identify them by period. A single pic is not enough for me to be 100% sure but I'll try my best.

1) Schick Injector Twin: First double injector blade ever, introduced in 1974.
2) Gillette Twinjector: 1975-1979 Those are teflon coated Stainless Steel. Also labelled "Trac II Injector Blades".
3) Late 70's
4) Brass containers are a pain to identify without seeing the logo. They were used up to the late 50's. Hydromagics also came with blades in brass containers.
5) That's a brass container that was sold pre WW2. It is the same container that came included in Type E sets.
6) Teflon coated Stainless steel blades, introduced in 1967. One of the best Injector blades ever (YMMV). The Super-Chromium Krona pictured in @bartje-p 's pic were introduced two years later when Schick discovered how to apply a thin Chromium layer on the edge for improved durability.
7) European container, Made in Sweden or Holland (most likely) from the 80's
8) Current "Chicks"
Last edited: Dec 3, 2022
You must log in or register to reply here.

Schick injector users - how many shaves per blade?
2

vintage Schick injector on the way
2