Doing a review of the TATARA in Masamune Handle/Close Comb/Cap ["Full Masamune"] - use for about 20 days.
One of the images does not preview but click to see it.

Upgraded from using the Merkur 34 for about 10 years. Got it in college for a good price around $25. This is when I started first with DE/Wet shaving. I think its a neutral 0.00 exposure with blade gap of 0.70. I have dense and course hair growth; the stubble after 1 day is very very difficult to shave. As such, not knowing any better, at the time to a few months ago, only used the Feather razor blade. Feather gave the best shave but man, if the hair had not grown out or preshave oil was not used, got real bad irritation and cuts. Additionally, two months ago before TATARA, tried the Gillette Super Platinum 7'0 Clock (Black cover) blades on the Merkur 34 razor. Shaves were improved as far as reducing the irritation but I still lit up like a lighthouse (head shave too . But still could not shave all too well on day 2 or 3 of a previous shave.

Now.....Thanks to reading reviews here on B&B and learning from some amazing folks here on this forum, I learned about the technical specifications of razor gaps and exposure and effects thereafter on the shaving performance.

As such, went with the TATARA in both the closed Masamune and Nodachi comb (both have different exposures). I also like the aesthetics of the design and did not need an adjustable razor knowing that if I got the technical specifications within my needs, there was no need to have adjustable settings. I planned to return one of the combs after doing the testing. Razor was purchased directly from Tatara and thankfully at the time - company was offering free worldwide express shipping.

I tested the two closed combs, Masamune and Nodachi each using the Gillette 7'0 and Feather. Used no pre-shave oil to really see the raw effect.

First initial impressions on the testing was fabulous. Where the heck was I and this razor when I first started shaving in high school? I felt so incredibly stupid that all this time my frustrations with shaving were all resolved. No irritation, no cuts [that's right not cuts to date at all] so far in using this razor. The Nodachi has a higher exposure (0.90) and gap is higher ( negative 0.03). I was perplexed when I shaved because the action on any combination of the razor comb and blade was super fantastic as mentioned above. This razor is super effective and efficient - so much - I forget to pay close attention. Its VERY forgiving in the way I cut the hair in angle and touching the skin. In doing the test combination, I really like the Masamune comb with 7'0 blade. One of the greatest takeaways has been I can shave my head with this razor [even if I went with a Feather blade]. This was a giant no no for me before. This razor makes me want to shave and not see it has a chore. I am incredibly fortunate that I found this razor. I would recommend, bias of course due to not testing other razors, giving this razor a a try. If I could describe more in detail the annoyance I USED to have in shaving - it is no more. My skin no longer gets red, oily, or shiny or any cuts [so far]. I can finally shave if I wanted to after 1 day -given the way my hair develops. I could never do this before. And the head shaving, adds on to these benefits - especially getting a BBS shave without any problems or bleeding from cuts. I do two passes for the face and about one pass for the head.

A few take away's from the last 20 days of use
1) Weight balance is superb in holding the handle in varying angles and lengths. No issue is trying to balance the razor- especially helpful when doing head shaving.
2) The grip is wonderful - no scratching or roughness. Even when wet, the entire body of the grooves, hold your fingers without issue or risk of slipping.
3) The comb and cap seal seamlessly. There is no chattering of the blade what so ever - can you say silent deadly cuts? Oh yes - the hair or you for that matter have no idea your even shaving. The cap has two deep notches that add to the securing the blade in place so it does not move in any direction.
4) The connection between the handle and comb are deep. There is a nice bit of gap on the tip of the handle when unscrewed you can see that fits superbly into the comb. This really makes the razor feel like its all built with no assembled parts.
5) The handle flips to the other side very quick. This is due to the grooves being concave and not convex. And one of the biggest plus, the end bottom tip of the handle is rounded. I really like the feeling on the bottom of the handle when its held. Feels even and smooth - not like some knob sticking out.

In the end, this razor can make any "samurai" become a legendary master on the first use. Its that incredible.

Good review. What others were they comparable to?

@CzechCzar - I cant comment comparability to other razors. I am in so love with this, I had the Mekur for about 10 years since college. But after getting the Tatara, I PIF'd the Mekur on B&B. I really hope this will last me the rest of my days of living!!!
S

I think it's one of, if not, the best double edge razor you can get.
My Nodachi is outstanding. Impeccably well built with 0 tooling marks.

I have recently bought a masamune and it is indeed a great razor.

can anyone compare this machine to the R 41 ???
or to another one

PinHead said:
can anyone compare this machine to the R 41 ???
or to another one
Click to expand...

It's a mild razor, no resemblance to an R41.

thanks I understand .. so for me I will not be good because I prefer aggressive

PinHead said:
thanks I understand .. so for me I will not be good because I prefer aggressive
Click to expand...

Nodachi is more aggressive but still not R41 aggressive. A much better razor though in my opinion.

I use Yaqi Knight Hemlet from more aggressive and effective machines than r41 ...
of course in my feel.
I also used RazoRock Game Changer 84 OC
which I think is effective but milder than r41

jmudrick said:
Nodachi is more aggressive but still not R41 aggressive. A much better razor though in my opinion.

Sent from my LG-US998 using Tapatalk
Click to expand...

If you don't mind my asking, how efficient is the Nodachi? A CG L3 is my daily driver and that is the first razor I have used that is efficient enough for me, while also being gentle enough.

R41 is surely aggressive, but is No 2 efficient razor after iKon Tech IMO.

I wonder about the efficiency o Masamune or how efficient is compared with R41 and iKon Tech.

ukobke said:
R41 is surely aggressive, but is No 2 efficient razor after iKon Tech IMO.

I wonder about the efficiency o Masamune or how efficient is compared with R41 and iKon Tech.
Click to expand...

I don't know why you would want to compare the mildest razor Tatara has on offer to the most aggressive razors on the market. If I said the Masamune is less efficient how on earth is that helpful?

Again, I don't know how these comparisons are of much use comparing wildly different razors.

Contributor
The handle has a very distinctive look to it.
F

Would knowing the technical setup help? I know that helped me a lot. If unaware, the higher the blade gap, the more aggressive coupled with if its a positive exposure. I was lucky to knowing from Mekur as a base and taking a theoretical leap in purchase. So glad too. Yes the Nodachi comb did feel more aggressive but I could live without it even if there was no cuts - did not like that extra blade feeling. I really like getting a very nice or close to BBS shave without even knowing its happening. I read somewhere else here (@Hannah's Dad ?) about trying shims. I might try that too just for fun. He did a fun little experiment that sounds like worth doing and if it does, might make my own shims.
Last edited: Jun 23, 2020

@jmudrick Maybe I was wrong with my English.

My question has to do with how efficient is the razor Masamune compared to others I mentioned and NOT about how mild or aggressive are.

(I have noticed that people confuse the meaning aggressive and efficient which is clearly not the same for razors).

ukobke said:
@jmudrick Maybe I was wrong with my English.

My question has to do with how efficient is the razor Masamune compared to others I mentioned and NOT about how mild or aggressive are.

(I have noticed that people confuse the meaning aggressive and efficient which is clearly not the same for razors).
Click to expand...

I thought I was also clear, the Masamune is not as efficient in most situations as the Ikon Tech and R41. To repeat, if you are after additional efficiency you want the Nodachi not the Masamune.

Great review of this wonderful razor @freeasimo - happy to hear that you love it as much I do.
I'm looking forward to testing out my new Tatara/Semogue boar brush with my Masamune. 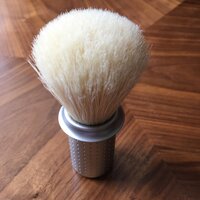