I was lucky enough to put in the winning bid in this year's Sue Moore Memorial Fundraiser for 10 tubs of Los Angeles Shaving Soap Company's vegan soap with my own custom scent. Here is the auction thread. The tubs arrived last Friday and have been using the soap all week.

In case you're not familiar with this artisan soapmaker, L.A.S.S. is a vegetable based soap modeled after the much loved Martin de Candre. It's nearly identical in all respects to MdC with the exception that it is not cured for four months after it's made, so its consistency is more like a croap. Even so, this soap creates a rich and protective lather with plenty of cushion and slickness which left a great post shave feeling on my skin. Like MdC, you don't need to heavily load your brush to make enough lather for a three pass shave. I shave with a straight more often than not and make my lather just a bit on the watery side so that the blade won't try to stick to my face on the shallow angle passes. Each shave with L.A.S.S. was smooth, close and comfortable without any irritation.

Now, I must admit that I am not a gifted scent designer but I do know what I like. I also need to admit that I had not tried this soap before I made my winning bid, but based on some stellar reviews given by B&B members I decided to throw caution to the wind. John Brown at L.A.S.S. was a real pleasure to work with as he helped guide me through the process of creating Bespoke #1.

As I had never used his product, John first sent me samples of his existing line of soaps, Topanga Fougere, Santa Monica Bay Rum, Woody Lavender, and Vanilla/Eucalyptus/Mint. His scents are truly remarkable and showed his ability to blend seemingly incongruous EO's (Vanilla and Eucalyptus? C'mon man!) into a sublime shaving experience. I felt a bit intimidated at the thought of creating something he would want to add to his soaps.

After using up the samples we discussed the types of soaps I used and the scents I liked. I gave him a list of the fragrances I enjoy and left it to him to do all the heavy lifting. John was so good at this that he nailed it on the first try! When his first sample scent vial arrived I ran it by my official scent-o-meter (SWMBO, of course) who gave it a most enthusiastic two thumbs up.

The Bespoke #1 Scent is pretty darned amazing if I do say so myself! Although the earthy (I want to stress not too earthy) vetiver is the predominant note, on the third shave the soap began to release the other notes with vanilla, labdanum and pepper making themselves known. The bergamot is very faint, but I'm sure it will reveal itself to a greater extent with each subsequent use.


If there is one drawback to L.A.S.S., it's the packaging. The mouth of the jars in which the soap is packed is too small to allow a modestly sized brush to pass easily. Here is a pic of the Kent 2008 B&B LE (20 mm x 48 mm) and the tub to give you an idea of the size of the opening. 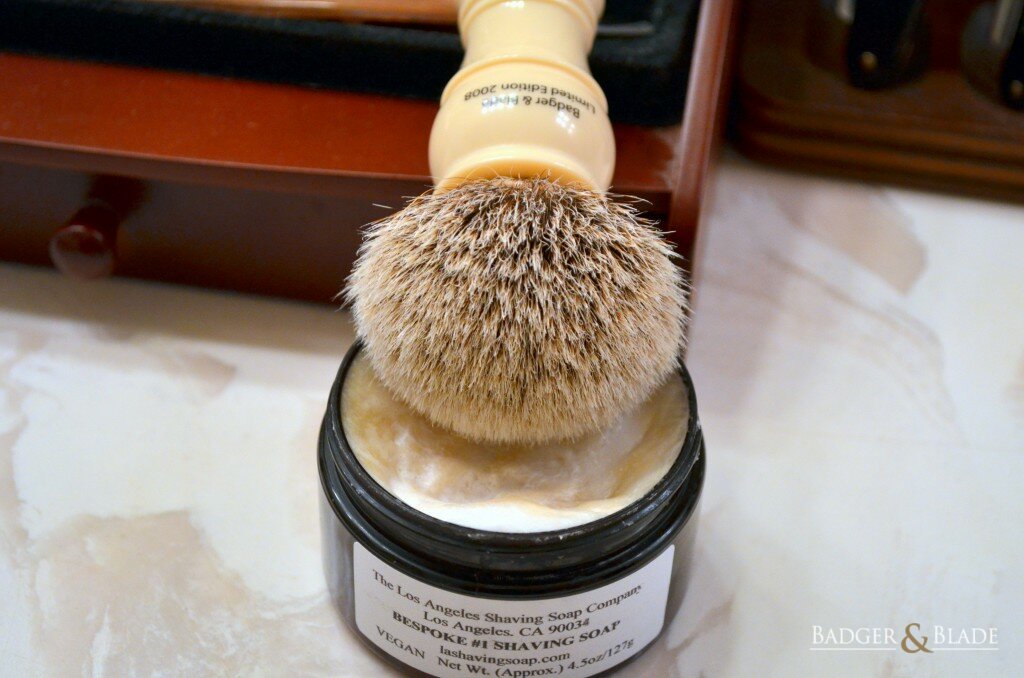 Thank goodness for Pyrex! The soft consistency of the L.A.S.S. made it real easy to transfer into a larger glass bowl. 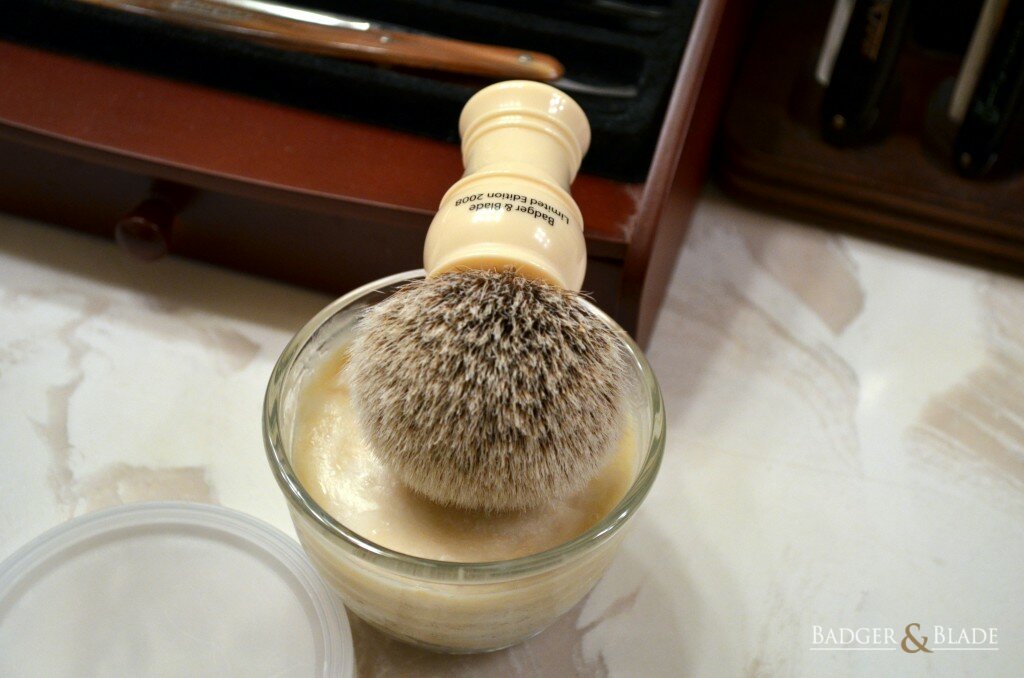 Here's a pic of my MdC "brain bowl" next to the Bespoke (on the right) to give you an idea of the difference in consistencies. I'm not saying that I prefer one over the other or that one is better than the other. They're just different.

And now for the money shots! A test lather with the 2008 LE and about 20 seconds loading time. I face lather and this is the first time in 3 years I have made lather in a bowl so please forgive me if you think my lathering skills are lacking. 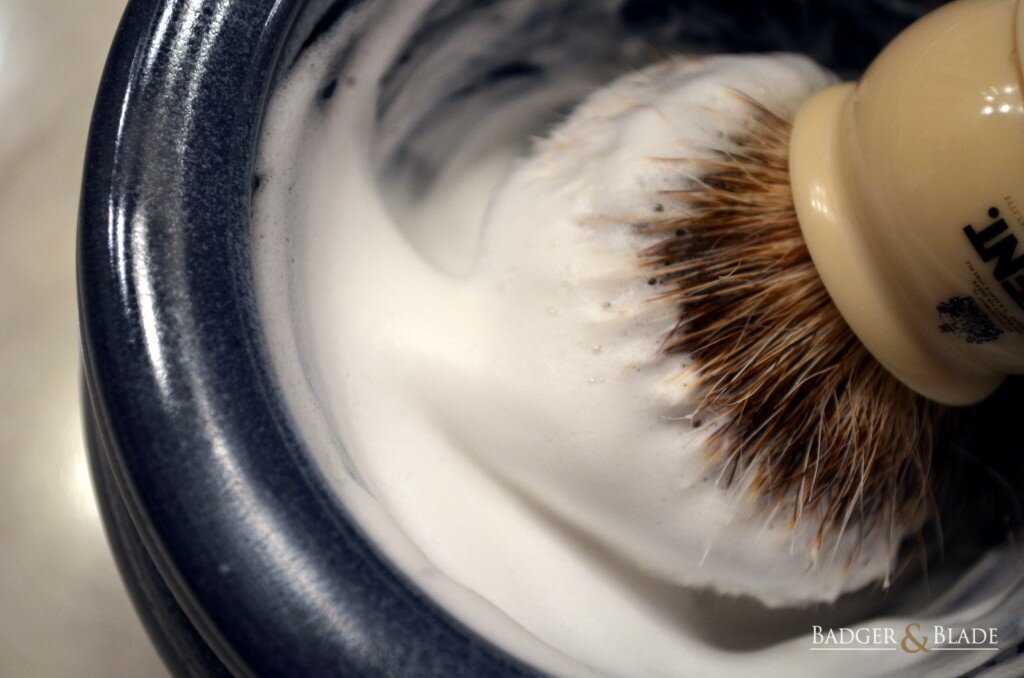 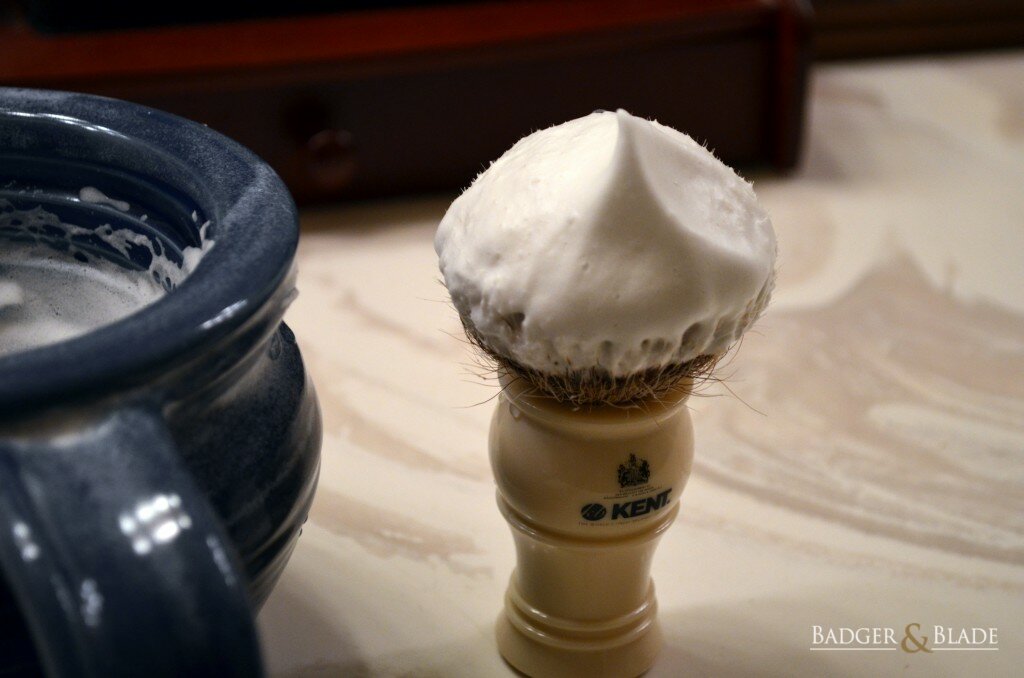 And just for fun! 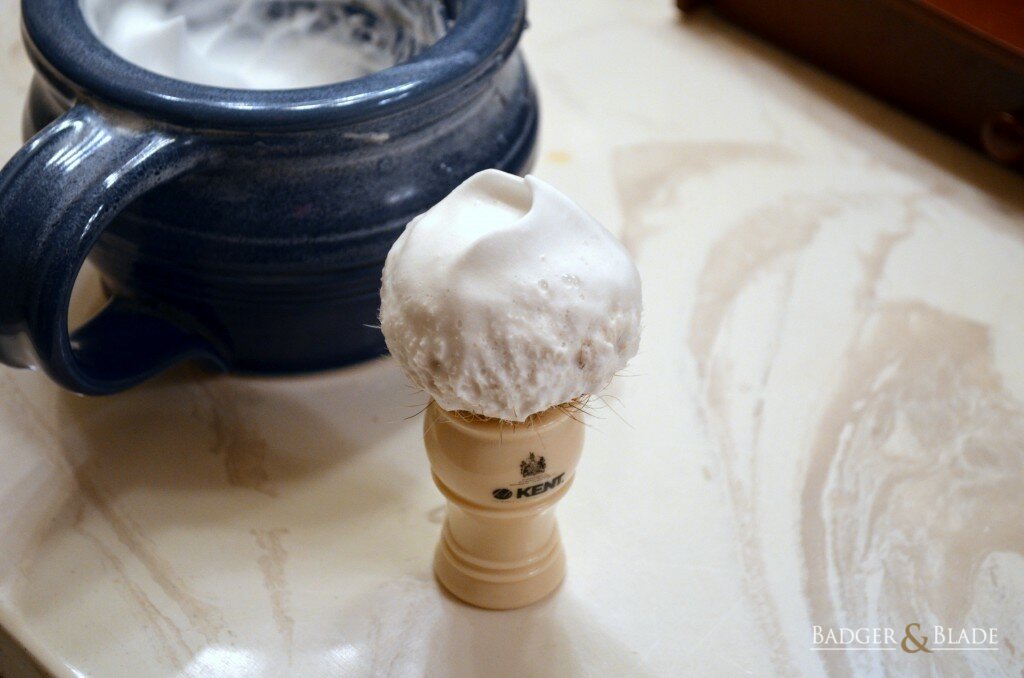 All my other brushes were jealous

John also sent some samples of the Bespoke #1 and I will choose up to 10 B&B members at random to sample the soap and critique its performance as well as my inaugural foray into the world of fragrance creation. I want the lucky recipients to be brutally honest with their opinions of the scent. I know they will love the soap notwithstanding.

My highly biased opinion is that with John's skill and my dumb luck the Bespoke #1 is a marvelous and complex scent married to a truly outstanding soap. If the reviews are favorable he might add Bespoke #1 to his existing line. And if he does, John has graciously agreed to donate a portion of the proceeds from the sale of Bespoke #1 to cancer research.

Even if this experiment turns out to be a real stinker, I would encourage wetshavers everywhere to try the other soaps offered by L.A.S.S. It's a lot easier to get than MdC and just as good, if not better.
Last edited by a moderator: Feb 8, 2017

Congratulations Harry! The soap sounds excellent. I have a tub of Topanga Fougere from LASS and it is a great soap. My only complaints have nothing to do with the performance of the soap, I wish it was in a larger diameter tub so that it would be easier to load and I wish that the labels were water proof.

How prominent is the clove note?

Nice write up! It's got to be an awesome feeling helping to come up with a fragrance like that. I'd love to give it a whiff. Haven't tried LA Shaving Soaps myself, but it's definitely on my list. I've wanted to try it to see if I liked the formula enough to give MdC an order at the much higher price point.

That sounds amazing. I use John's soap and love it!

I haven't tried L.A. soaps yet but they are on my to-do list. The scent description for this bespoke soap sounds great, right up my alley as well.
C

Great write up! I have been wanting to give L.A. Soaps a try.

He didn't skimp on those essential oils. Frankincense, Cedar, Myrrh and fossilized amber oil. This could be an intriguing fragrance.

Very cool! I've been wanting to try this soap after all of the reviews, but the samples have been sold out on the site. Maybe they'll reload soon.

I've gone through a sampler of LASS and thought it was fantastic. I'd love to give your scent a try, as I also have gotten big into fragrances in the last year or so and would get such a kick out of doing an experiment like this myself.

Great review. I haven't tried MdC or L.A. soaps yet but they are on my to-do list.
Fingers-crossed I get a lucky sample!

Awesome review Harry...been waiting for you to comment on this. I've had the Topanga for a few months now and the scent is very complex and the performance is out of this world. I forgot you hadn't tried this stuff...lucky you! Just transferred mine to a bigger bowl to get a better lather. I thought hard about bidding during the auction but knew this would go way out of SWMBO's price allowance.

The amber and frankincense are interesting choices...is the amber actually noticeable at all?

Elliot,
your inbox. Is full. I sent you a PM.

The scent description sounds awesome. Congrats to both of you.

I've read a lot of positive reviews and wanted to give his soaps a try. John didn't have my country listed so I shot him a PM on reddit asking if he would consider shipping here. Not long after he added my country to the list and I immediately ordered 2 tubs - Topanga Fougère and Vanilla/Eucalyptus. I can't wait for them to arrive and give them a spin!

Hats off to John!

Excellent review; thank you for your thoughts. I have tried a sample of Topanga and did enjoy the shave. Am waiting for more fragrances.
R

I have two of his soaps and they have given me wonderful shaves. I transferred them to Grundtals.

More importantly, thank you supporting the fight against breast cancer!

Congrats on winning this and creating, what sounds like, a great scent. Congrats!!! Hopefully, it will be added to the lineup and we can all continue to help on the cancer research.

very cool. That is a killer list of ingredients. Love that their products are vegan.

Great review - it's obvious a lot of time went into writing it & taking the pics - thank you. These well written reviews are a big part of what makes B&B so great.

I'm personally a substance over style person (i.e. shave performance comes first) and I have read a number of positive reviews about LASS recently - I'm intrigued. I consider MWF to be my resident soap kaiser - but I'd like to give LASS a try in 2014.
Last edited: Dec 8, 2013
You must log in or register to reply here.