ivan_101 said:
Now tell us about that Tech. It's a triangle slots, right?
Click to expand...

Yup, pre-war Gold Tech one of my first razors that I bought after joining here. 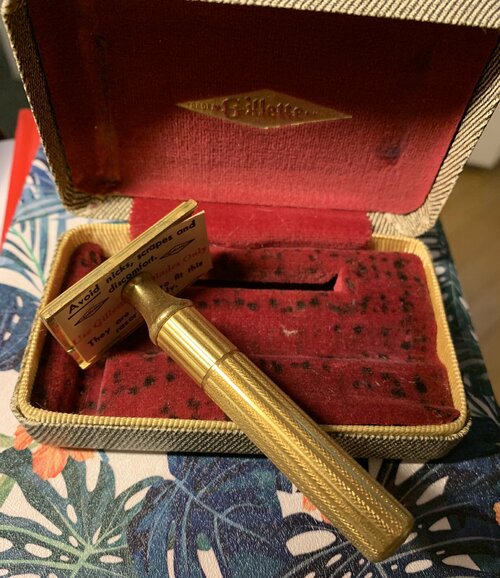 Mustang EdC, 1.7 oz, $11 (I'm not certain whether this comes in both EdC and EdT versions, or if the terms have been used interchangeably. Some bottles are labelled as "Cologne Spray" with "Eau de Cologne" on the box--as mine is-- and some are labelled as "Eau de Toilette." Often they are sold as "Mustang Cologne Spray EdT" and you'll see a picture of one or the other. I have the cologne spray/EdC that comes in the tin gift box. Note: sometimes the tin gift box edition is 1.0 oz., mine is the one with 1.7. oz. You won't save money by going with the 1.0 version, so pay attention if you buy this. I've worn this for three days, and have liked it better with each wearing. SWMBO liked it right off, and described it as "masculine." Starts off with ginger and lemon, closely followed behind with sweet tobacco and cedar. Very nice, a successful blind-buy!)

A few citrus/green "freshies" that I don't think I've seen in the list so far
Geoffrey Beene's Bowling Green
James Bronnley's Original (may be over $40 now-mine is old)
1881 Nina Cerutti*
Boucheron for Men*
*These two are on my long-term wish list- I don't own them...yet...

...and with the Christmas season almost upon us, has anyone mentioned Burberry London?

Sorry if these have all been previously mentioned and I absent mindedly skimmed past them, but they're all good enough to deserve more than one mention anyway, I suppose. Terrific thread- keep 'em coming!
You must log in or register to reply here.

Any New Fall/Winter Fragrances in Your Rotation?