I recently purchased the new parker 74r butterfly razor and find it to be a nice looking, well made razor but too aggressive for me, more so than the likes of a muhle r89.

Can anybody recommend milder butterfly razors, in a similar class to the muhle r89?

Have you tried an older Gillette Super Speed? They're a fantastic performing razor. I would classify it as mild yet efficient.

Second on the super speed. The van der Hagen isn’t bad for not much money.

Contributor
First razor was a butterfly, the aforementioned Van Der Hagen; son gave it to me for Christmas, basically my all-access pass to the rabbit hole. But my shaves have been exponentially better ever since. I haven't used that razor in a long time as I find it a tad too mild for me now, but I'd second the motion for the VDH.

The Feather Popular is another good option if you're not a zamak fan and prefer new to vintage. It's a mild razor, but paired with a nice sharp blade (like a Feather), it's a very competent shaver.

I'm curious why you have a preference for butterfly razors though. They were invented and promoted to increase the frequency of blade changes by consumers because blades sales drove 95% of the profit margin for 20th century razor companies. Shave quality was a distant 2nd or 3rd priority for the marketing teams that drove those designs. I own a handful of them, but I've never used one that performed as well for me as a basic 3 piece razor. Having said that, lots of folks love their Slims and Fat Boys, so it's definitely a YMMV thing.

Both Slim and BB have a character which I'd consider as "close to the milder side". So you can pick one. Plus they will give you freedom for the future. I mean, you love to shave with milder razors for now but in the future your opinions and taste may change, and you may start to like the agressive feeling that razor gives. On the other hand, Gillette has proven its adequacy over the years. Parker has some good razors, I agree, but I don't think that they are on "that" level. I mean, I've seen many people who had some quality issues with Parker, some were saying the doors of razor dont close equally, some were saying that the razor doesnt hold the blade as it should, but on the other hand many people are satisfied with Gillette including me, although they have made it years and years ago. If you decide to buy one, be sure that it is in good condition and doesnt have problem with adjustment system, doors, adjustment ring etc.

Another vote for a Slim! 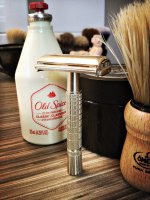 Like other said, a Slim or Super Adjustable (Black Beauty) with either short or long handle is probably your best option. With them you basically have the full range of all (or most) Gillette tto razors in one razor. There's nothing wrong in buying any of the Super Speeds as well, but if you want only one razor, the Slim or the Super Adjustable are just better and their prices are very similar to the Super Speeds.

Vintage Gillette Super Speed, any one will do.
R

LMcC said:
Second on the super speed. The van der Hagen isn’t bad for not much money.
Click to expand...

I will second the VDH razor. It is my understanding that is a rebranded Weishi from China. It comes in both short handled and long handled versions. If you have big hands, get the long handle. I believe the Microtouch One razor is the same as the short handled VDH. The razors are made of brass rather than Zamac, so that is a good thing.

One caution when using butterfly, TTO razors. Make sure you keep the doors closed tightly. The worst cut I ever got shaving was due to the doors on my VDH short handle razor opening enough that the blade was no longer secured. That is why I recommend the long handled razor. There is more room to grip the razor without gripping the adjustment knob.

I use my VDH long handle razor equipped with a super sharp blade to do my clean up pass on every shave. I might use a straight razor, DE razor, or SE razor to do the main passes, but I always grab the VDH for my clean-up pass as I can pick up the last stray bits of stubble without irritation.

One more vote for the Van Der Hagen.

Contributor
Another vote for a slim. I'd also be interested in your reasoning behind limiting yourself a butterfly.

A vote for the Weishi and rebranded versions

Nooooooo! No Weishis or, even worse, Weishi "clones." And especially a long handled Weishi; if you need a long handle, you are holding the razor wrong (unless you are shaving your legs).

A lot of razors, such as Van Der Hagen, are apparently a rebadged Weishi. But there are razors that look like a Weishi that are not only very, very poorly made, but sometimes extremely aggressive, in a bad, bad way. You can find them on A*****n, sometimes very cheap, sometimes ridiculously expensive, because on a website photo, most people can't tell the difference.

A Weishi is pretty and the construction is cheap but adequate, but they are over-priced (I bought mine in China for $3). The only time I got a decent shave with one was with a three-day growth of whiskers while camping (they are light).

The construction of the Baili butterfly is far better and it shaves better. It is a razor that responds to changes in angle and pressure, so experiment. With a sharp, smooth blade, it can provide a good shave.

The Baili is over-priced, especially considering you can buy a decent generic three-piece razor for less. Frankly, I do not care for butterfly razors, but I bought mine years ago in China when it came out for about four dollars. They are a gimmicky novelty in my book (and adjustable butterflies even more so). But a lot of people have a craving for one. And some people have arthritis, or whatever, that can make changing blades difficult on a three-piece razor.

There are no Baili butterfly clones, as far as I can tell, aside from the Viking razors. So if you see a razor that matches the Baili, with its two pin hinges, on eB** orA*****n, at a better price, go for it. Shaving specialty shops, such as Italian Barber etc., often sell rebadged Bailis, sometimes very cheaply. I think Italian Barber might have them as part of an intro package or as a scratch and dent.

On the downside, you cannot disassemble most butterfly razors (anyone know how???), so they will eventually get dirty inside. This makes buying old, used Gillette butterflies problematic. A three-piece razor is definitely more sanitary.

Actually, a Baili butterfly may be a bit sturdier than most three-piece razors because it has no post for attaching the handle. Also, there are no alignment pins, so you don't have to fiddle with the blade. It makes a good travel razor and a good learning razor, and it is kinda fun.
Last edited: Apr 29, 2021