I recently ordered both these razors. I was waiting for the new SS version of the Lupo with its increased blade gap, but it did not release before christmas. But a chinese razor that was kinda similar, yet rather on the mild side (.68 blade gap both OC and SB vs .72 OC/.95 SB on the dual comb Lupo) than the Lupo which was made a fair bit more aggressive, to have more blade feel and efficiency.

I ordered the DS-X1 before the Lupo DC, but Canada Post was faster. They still arrived roughly around the same time.
I tested both, the Lupo already twice, with a Feather and a Nacet. For this comparison I will go with the Feather. As soap I used "red" Cella Crema da Barba.


Some razor stats first:
RazoRock SS Lupo DC with Barber Pole
~15mm handle diameter, 74g/2.6 oz handle weight. Very light head.
0.72 blade gap open comb
0.95 blade gap scalloped bar
Extra info: The Lupo Aluminum has a .72 blade gap with a solid bar.
No stand for the Lupo yet, I have some that fit, but they destroy the beauty of the Barber Pole handle.


The (short) VERDICT?
Both seem similar in type, but are actually very different beasts.
The Lupo DC is always more on the efficient and somewhat aggressive side - but doesn't bite easily.
The DS-X1 is a mild and smooth razor that lacks efficiency, two pass is not quite possible, for a BBS you have to work some patches extra and maybe even use some pressure and ride the (very nicely scalloped) cap.


Lupo DC:
The Lupo DC offers what was promised: A Lupo with a redesigned head (no longer rounded sides, you can place it on the side and it won't roll away) and a dual comb if you wish so. The difference between both sides is rather low, much less than expected. The .72 gap is less, but the open comb makes quite up for that. Why they didn't go with an open .95 side? I didn't find it overly aggressive, but sensitive shavers will feel the blade too much.
-> this razor was clearly made with people in mind who want the Lupo, but more efficient and with a bit more blade feel.

www.italianbarber.com
^ Why the Lupo DC doesn't have both sides ranked seperately? I don't know. The OC .72 side might actually be that of the Lupo 72 but more aggressively rated due to the Open Comb, the Lupo 72 has a Scalloped Bar.

The spirals of the barber pole handle are very nice and give very good grip nevertheless. The blade tabs are covered, machining was flawless and the flat head profile makes it easy to shave precisely and under the nose in particular. The open comb was nicely rounded and is a very smooth and soft open comb, I very much love Razorock's OC design a lot, also for the Game Changer .84 it is a very good fit.

I have had more aggressive razors, but few are so efficient. It's a step up from the Game Changer .84, but I still find my Outlaw both smoother and more efficient. The blade is a bit more tensioned and curved in its cap, this is a bit missing in the flat head of the Lupo and GC.


DS-X1:
This one is mild, but gives still a very thorough shave. You just have to correct more often and if you shave with the Lupo DC like you can with the DS-X1, you will flay your skin. This razor is very mild, unfortunately I don't own a .68 Game Changer, but I think it could be even milder. I would prefer it to a DE89/R89 or King C. Gillette every day though, the option to switch comb types on the fly comes in handy. The difference actually feels more pronounced than on the Lupo DC. I recommend using very sharp blades for this razor, it's firmly in the "mild" part of the scale.

www.italianbarber.com
^ I would place this one roughly at Mamba 70/Game Changer 68 level

DSCosmetics loves shiny things. They don't have matte, apparently. They do machine+hand polishing, and this comes with a drawback:

The "Destroyer" handle I also own with lots of knurly checkering should have had great grip, but it was polished smooth and was quite slippery, hard to hold. And their handles are very heavy, around 20g more than the heaviest RazoRock handles. The "Pioneer" handle was smoothly polished, but due to its form factor it has much better grip and works out better.

Something I didn't see before is the M5 silicone o-ring they put between baseplate and handle. It's a nice touch if you love changing handles or collect them, but in general that's quite unnecessary.


Both are not overly expensive. The Lupo is for both sides of its dual comb rather aggressive and very efficient, the DS-X1 is mild, smooth and requires more passes.

Interesting review, I have the Razorock 2nd generation Lupo .72 and I'm really enjoying the shave. I find it easy going but really efficient and smooth. I don't think I'm caught up in the hype because I have over 40+ razors and it stands out from the bunch for now. Razorock did a nice job on design & price in a very competitive market with so many different DE models of razors to stand out from the rest of the pack.
Have some great shaves! Stay & think safe in these times!

Did recently a 7 day consecutive shave to see if the Razorock 2nd Gen Lupo .72 Safety Bar would do as a daily driver and it was great. I had more BBS shaves than the usual but no irritation and 1 weeper possibly when I first tested it. The razor is one of the best for mid aggression design and enjoyed it very much. I kind of go through a testing procedure when buying a new or used vintage razor like buffing, J hooking, Gillette slide and is it a daily driver or to aggressive & how is it shaving around the nose area.
The Lupo .72 seems to be tailor made for my medium type beard and regular non sensitive skin with just a 2 pass shave WTG + ATG + pickups. I like a 2 pass + pickups shave on a mid range razors and have a lot of them that I enjoy. I like a 3 pass & pickups on a mild razor.
I was looking at DS-X1 DS cosmetics razor and it looks like a winner & their handles look very nice.
I have some nice mild razors already and to give a mild razor a boost I like to use a Kai SS blade in them and that makes a nice difference usually, The Kai SS is a wider blade than a standard Gillette blade by .009" or .0045 thousands of a inch per side & that might help give the boost a person he wants for a little more blade exposure or blade feel like many shavers like to express it. 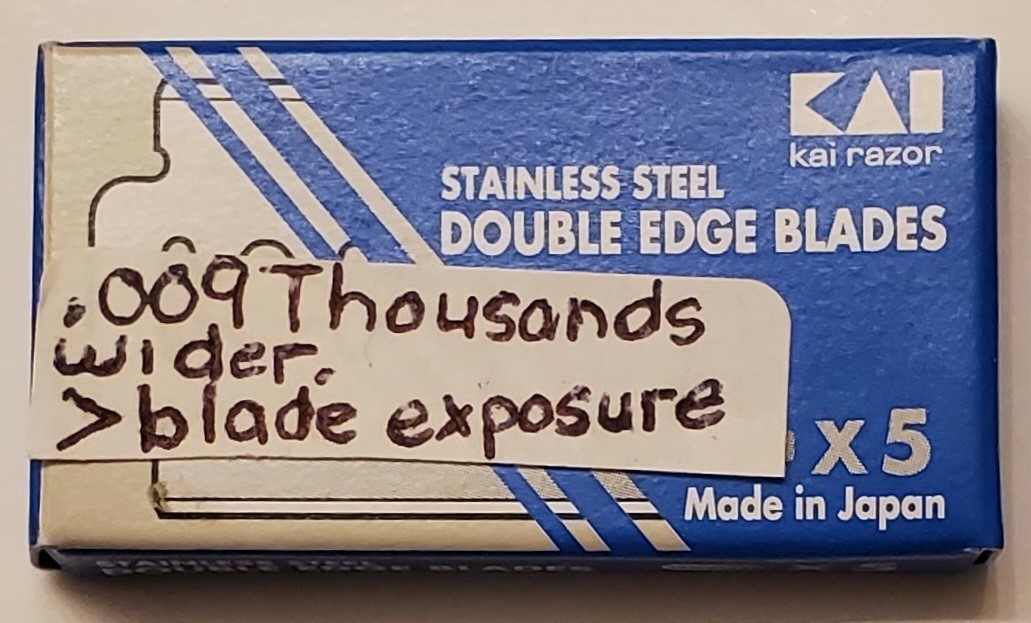 Excellent review! I just finished shave 1 with my Lupo DC.


Iridian said:
The difference between both sides is rather low, much less than expected. The .72 gap is less, but the open comb makes quite up for that.
Click to expand...

Very much +1 to this.
You must log in or register to reply here.

Can anybody compare the Tatara Masamune or Nodachi with the Razorock Game Changer or Lupo razors ?
2 3 4

Really tried to love my RazoRock Lupo DC, but .....