I would like to get my first Razorock razor, but not sure which to get.
I have a Rex Ambassador, Ikon B1 Slant and the Rockwell 6S.
I also have a WCS shavette, which I am just starting to use on occasion.

I'm looking to experience something with more blade feel.
Also interested in experiencing an open comb.

I was leaning towards the RR Lupo with the dual head.... people seem to have mixed opinions regarding the OC side - and just looking for some advice and opinions to help figure out the best option(s).

I was making this decision about a month ago! My goal was a very nice fully machined stainless mild razor, cause my collection is lacking in the mild end of things currently.

I ruled out the Mamba for two reasons: 1. The blade exposure is either negative (Mamba 53) or negative-to-neutral (Mamba 70), and 2. Aesthetically, I don't love the look of the curved base plate.

I then ruled out the Lupo cause all three the stainless versions are in the top half of Razorock's aggressiveness scale, heh.

I chose a Game Changer .68 solid bar, since it's the mildest. But I also retain the ability (and desire) to later pick up all five other base plates for the Game Changer.

So far (only had it a couple days), I'm loving how agile the head is, as it's a lot thinner than my other stainless razors (Traderes).

I have the Razorock Lupo.72 and it is a mid range and it is a wonderful razor and is well made with machining accuracy. I find it not aggressive but efficient and mostly a carefree shave. if you have very sensitive skin the Razorock Game changer.84 or .68 would be my next razor of choice it is a tame mid range and has not much blade feel IMO.
(Click picture to enlarge) 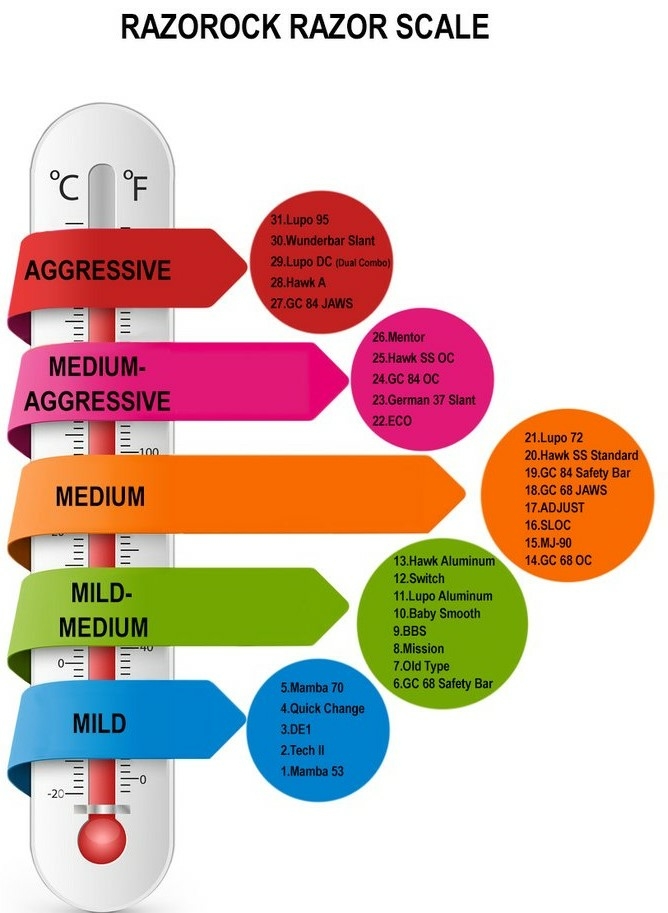 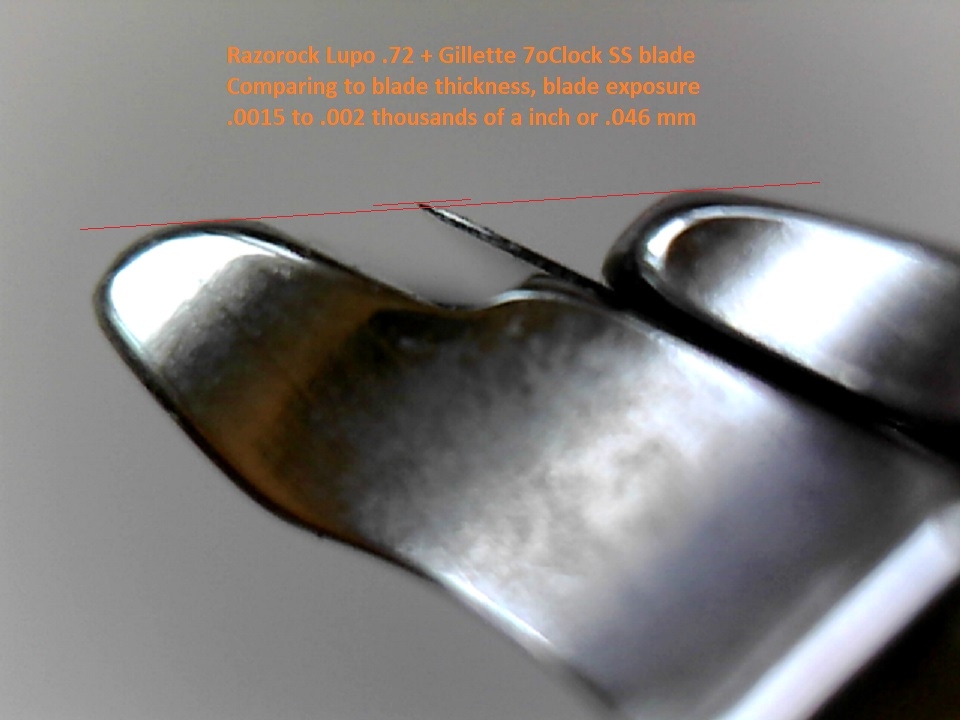 The Lupo will provide the most blade feel between the two. If you want some blade feel, while still being smooth, check out the Blackbird.....one of my favorites.

I have a rex its to much for my face over 2-3 range !
also have the lupo with 72 and 95 its like the rex to much for me
and GC with 68 and 84 plates as said the Lupo is the blade forward of the two

for me the blade feel of the Lupo is like the rex above 3 in general
below 2-3 its a bit more like the GC 84 and I say a bit more cause the GC has less blade feel and IMHO is more comfy than the rex under 2-3 it is for sure a much more mild razor ! the GC 68 would be like a - rex number


I would say YES get the dual plate ! and see what you think
you want to try combs no other way then to start !

also you get the more aggressive comb 72 and if its OK you know the 72 straight would be to weak !
if its to much but you like the blade feel of the 95 you know you can get the 72 plate

and of course the 95 is on the other side
in some threads folks find they prefer the 95 over 72 as being more comfy and I can see that ! they are way closer in comfort just the 95 takes a jump in efficiency (less touch up) with a bit more blade feel

Can't say how it compares to these, but lately I picked up a BBS-OC and find that it's a mild-feeling razor with a gentle shave. I don't have much time in on it yet, but for a plain DE with no slantiness it's suprisingly nice.

Labrecque24 said:
I would like to get my first Razorock razor, but not sure which to get.
Click to expand...

How would you compare the GC84 OC to the 84SB? I'd like something a little more efficient than the 84SB, but less blade feel than the Lupo 95 (which I have). Does the 84OC fall between them in efficiency and blade feel? I've seen some say the OC has more blade feel but not much if any different efficiency.

If you want blade feel either Jaws version of the Gamechanger will give you blade feel. I still have a Jaws 68, wouldn’t buy either again. They are good razors, but there is a significant increase in aggressiveness for a marginal increase in performance over the safety bar.

That’s my experience with a lot of Razorock razors. Within certain product lines the different combs feel more aggressive but don’t work better.

There’s a difference between GC 68 and 84. But within the sizes, the open comb and jaws don’t offer much.

The BBS and BBS OC are about the same. The BBS A is a step up. The BBS AS feels more aggressive but doesn’t work better than the A.

There a substantial difference between the Lupo 72 and 95.

I find the Lupo 72 and Ikon B1 slant to be very similar razors in terms of performance.

I have not used a dual comb Lupo.

I would also suggest the Game Changer Jaws, very aggressive OC razor, at least form me. I do have the Lupo .95 and it’s a good razor, but well away of being aggressive.

Chumango said:
How would you compare the GC84 OC to the 84SB? I'd like something a little more efficient than the 84SB, but less blade feel than the Lupo 95 (which I have). Does the 84OC fall between them in efficiency and blade feel?
Click to expand...

The GC84OC clamps the blade more securely than the GC84P, and for me it gives a more efficient shave. I used my GC84P for a Fixed For, so I am quite familiar with it, but I give the OC a slight edge in overall more comfortable shave.
I might add, that I don't usually shave every day, so that might make a difference for you.

Rosseforp said:
The GC84OC clamps the blade more securely than the GC84P, and for me it gives a more efficient shave. I used my GC84P for a Fixed For, so I am quite familiar with it, but I give the OC a slight edge in overall more comfortable shave.
I might add, that I don't usually shave every day, so that might make a difference for you.

Thanks. How does the GC84OC compare with the Lupo 95, comfort and efficiency?

Chumango said:
Thanks. How does the GC84OC compare with the Lupo 95, comfort and efficiency?
Click to expand...

Man, I have been wanting to throw my GC84OC into the mix, last used in OCtober, so I loaded it up with a Gillette Platinum (2) and got a really nice two pass shave last night.

I just got my Lupo 95 along with a few other razors to try and help me decide what gap to choose when my name comes up on the Wolfman list. I also have a WR2 1.15 that I am testing, but that is for another posting.

I'm going to say the GC84OC has slightly less blade feel, while being more efficient than the Lupo 95. The guard bar on the Lupo 95 is more comfortable, while the teeth on the GC84OC are only slightly noticeable and actually gives a smoother shave.

Maybe after a month of shaves with the Lupo 95, I might change my mind, but for daily or every other day shaving, at least for today, I give the GC84OC the edge.

You can't go wrong with the Lupo 95 it outperforms my GC 0.84-P in efficiency and smoothness

I find the Lupo 95 to be a very smooth and comfortable razor with a wide variety of blades. Personally I don't seek out aggressive razors and I was initially a little hesitant when I purchased the Lupo 95 but it surprised me by how intuitive and comfortable it is to use. It quickly became one of my favorite razors and after about 7 months of use I like it even more. 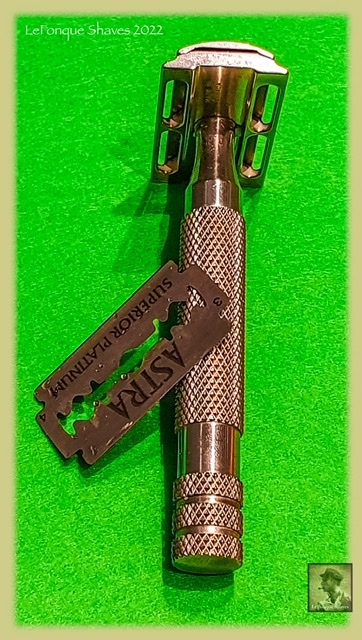 The JAWS made me forget about the 84 and the Lupo bumped the JAWS. Now I keep both loaded w/ Feather blades; for everyday shaves, it's the Lupo. If I miss a day or two at the most, then JAWS.

Lupo95 has a slightly more blade feel than the JAWS but for me, it's a slight difference.

I originally bought a .68 GC with the safety bar. Then I bought the .84 which for me was perfect. Gave my son the .68 plate and bought a new head and handle for myself. The .84 is like the baby bears's porridge and bed, just right
You must log in or register to reply here.

Looking for suggestions for a next razor