I went to the gravel pit after work on Tuesday, as I had a wild urge to shoot the double stack 38 Super.I hadn't had time to shoot it since I bought it.

This gun is a bit of an oddity. 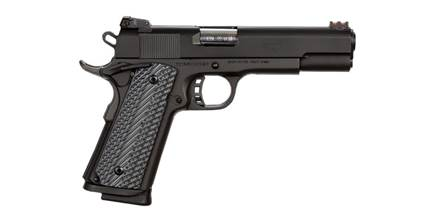 Mine didn’t have a fiber optic front sight, but after yesterday, it is going to get one. I have old eyes.

I really dislike ambidextrous safeties, so while I had it apart for a new trigger and trigger job, I fit and installed an extended, single sided safety and oversize firing pin stop. I am most pleased with how all that came out. A 3lb pull that is absolutely crisp and clean. It shoots extremely well.

The gun originally came as a combo with barrels and recoil springs for 9mm and 22 tcm, neither of which I was interested in. My attention was on the 17 round magazine capacity and the size of the breech face. If it would fit a 9mm, it would fit a 38 super. The 38 super is a semi-rimmed cartridge, much like the .220 Swift. That means the rim is bigger than the case, but not as big as you would expect to find on a .357 or 38 special. It is somewhere in between. While this is fine for single stack pistols, it absolutely will not work with a double stack because the more rounds you cram in that magazine, the worse the rims tilt the ammunition. Fortunately, there is a very simple solution and that is the 38 Super rimless, also called the 38 Super Comp (for competition). Starline sells the brass in bulk and it’s reasonably priced. Normal 38 super dies work just fine for resizing and reloading.

I originally considered just running a chambering reamer in the 9mm barrel, but decided against it as the chamber for the 9 is bigger at the aft end than the chamber for the Super and I didn’t want to over work my brass. So, I ordered a short chambered barrel from Remsport, along with reamer and headspace gauges from Brownells. No, I had never fit and chambered a barrel to a 1911, but I was about to learn.

I fit and installed the new barrel and etched “38 Sup” on the hood, so it was easy to distinguish from the others. I also bought an additional 9mm barrel and re-chambered it to 9X23 (a very hot/high pressure competition round). I did the 9X23 for no better reason than to have a switch barrel 1911 that would fire four different cartridges.

I took a pressure series of loads with me, starting with velocities just below factory ammo, to a top velocity exceeding a .357 Magnum in a 4” revolver (just over 1500 fps with 124 gr bullet). It fed and fired everything I threw at it. Not a single hiccup. I did note that the firing pin strikes looked pretty shallow and cratered as if the fit of the firing pin to the firing pin hole was a bit sloppy. I have ordered a new, high mass firing pin with an oversize tip so I can fit it to the breech face properly.

This one is a keeper. It is accurate, very reliable, and delivers 17+1 rounds of 124 grain hollow points at impressive velocities. What’s not to love?

Next trip will be with the new firing pin, a tweaked extractor, and will be shot on paper for accuracy. First trip was pressure series only, even though I did attack some cans in the process.

Since you are using rimless cases are you headspacing on the case mouth like the newer Super .38s?

.38 Super is an interesting round, in well-regarded in old school circles.

And it's a reloader's friend, for sure.

Since you are using rimless cases are you headspacing on the case mouth like the newer Super .38s?
Click to expand...

Yes. I finish reamed the chamber to headspace on the case mouth. Several things got my attention. First was the near absence of muzzle flip. Now, I understand why some competitors shoot the super in comp guns. Hang a good chamber compensator on the front and a little kid could shoot it. Second was the amazing lack of recoil with .357 equivalent loads. The weight of the pistol, the lower bore line, and recoil operation all worked together to make a real pussycat out of a high intensity round.
When I aligned the front sights on a tin can at 30 yards, it was easy to hit it. I did not expect this.
Lastly was the effect of the oversize / square bottom firing pin stop. While they work extremely well in a 45 ACP, the effect is even better in the Super. I don't like heavy recoil springs in my 1911 pistols, because of the battering the cause when the slide closes. This is one of the reasons I swap out the firing pin stops. Rather than use a heaver recoil spring to soak up slide velocity, I prefer to use a square bottom firing pin stop, robbing the slide of mechanical advantage when re-cocking the hammer. This causes the gun to dump more energy in to cocking the hammer, and less in to one's hand.

Been thinking on buying one of those 9mm/22tcm guns since I first saw them a few years ago. I had a full size Rock Island for a while and liked it pretty well, but sold it after buying a Springfield Micro Compact. Might have to look into it a little more after I buy a couple more CZ's.

Very interesting. Thanks for the write-up, Bill.

Very interesting write up. What brand is the base gun for this project?
M

It is a Rock Island. I own two Armscor guns and frankly, they are one of the best buys in the gun world in my opinion. I own over a dozen 1911s from Springfield, Kimber, Magnum Research, and Sig. The fit of this double stack is the full equal of any of my other guns and better than some. The finish of the internal components is also as good as or better than the others. I like lightweight, short triggers and that is the only reason I changed the trigger out. When I did the trigger job, I went over the sear with a jeweler's loupe. At 30X, I could not find a tool mark and the nose of the sear was perfectly finished, as were the hammer hooks. They also mated correctly.
I guess I shouldn't be surprised that it shoots and functions so well, but for the money, it is amazing.
I also have a 38 super single stack that I have polished out (mirror finish except for the top of the slide) and it is waiting on a hot blue job. I commissioned a set of water buffalo bone grips for it (hand made) and they await installation. I have nitre blued the pins and grip screws. When finished, this will ride in a Matt DelFatti holster. This is my BBQ and ice cream social gun.
There is just something special about the 38 Super. Born in 1929 and serving both saint and sinner, it carries a certain classic mistique that intrigues me. I'm beginning to understand why.

As with the .32-20, I’ve (also) always had a fascination with the Super. Picked up a .38 Sup. Colt Government & after reading your glowing Armscor comments, I just may have to look at some of their offerings.
M

Armscorp/Rock Island is well worth a look. The one I had was a good gun and I probably shouldn't have sold it. IIRC, I paid less than $350 for it new, though that was right around when they first appeared on the market and it was a GI clone. Give them a chance and I don't think you'll be disappointed.
M

As with the .32-20, I’ve (also) always had a fascination with the Super. Picked up a .38 Sup. Colt Government & after reading your glowing Armscor comments, I just may have to look at some of their offerings.
Click to expand...

I currently own three Del Fatti holsters. I have looked at everything else and couldn't find better. Unfortunately, the operation seems to have stopped when Matt's daughter passed away (I understand that she was running everything so he could just build holsters). If this is true, whatever is out there is all there will ever be.

The double stack is only worth a look if you are going to handload. It requires Super Comp cases to function properly. If you are going to shoot factory ammo, stick with the single stack pistols, as they handle the semi-rimmed cartridge just fine.

I know it's goofy, but for reasons I can't express, a high-polish blue 1911 in 38 Super, riding in fine gun leather, just screams "classic" to me and puts a smile on my face.

Mhinagoya said:
...I know it's goofy, but for reasons I can't express, a high-polish blue 1911 in 38 Super, riding in fine gun leather, just screams "classic" to me and puts a smile on my face.
Click to expand...

I am with you on your high-polish .38 Super/fine leather sentiments! The round in itself exudes class & especially so when we’re talking 1911s. I liken the .45 ACP to a Shire or perhaps a Belgian draft horse and yes, the .38 Super to a thoroughbred!

Regarding Matt Del Fatti, he is still churning out holsters, belts & such, but he has altered things a bit. Gina had her hands in every area of the office & shop ... from overseeing orders, to taking care of the books to finishing leather, she did it all. These days, Matt only builds holsters for 1911s; High Powers; HK P7 series pistols; Seecamps; Rohrbaugh R9s & a few revolvers. Unlike old times, when he and Gina let the waiting list run wild, he now caps it off at three to four years. As he begins to catch up on that list, he’ll allow a set amount of new orders and will then close the order window for three years or so. The key is to regularly monitor his website and then climb aboard when he’s taking new orders.

I cherish my Del Datti rigs every bit as much as I do the pistols & revolvers that ride in them. And same holds true for the holsters that Lou Alessi crafted for me.
M

I never got around to ordering a holster from Lou Alessi and regretted it. That being said, I honestly can't imagine how a holster could be made any better than Matt Del Fatti makes them. They are simply outstanding.
It's nice to know he is still making holsters, even though it is probably nearly impossible to get one. For anyone considering one of his works of art, they are worth waiting for.

On to the technical part of our program;
After I installed the new fiber optic front sight last night, I was going over the double stack and just for the fun of it, measured the barrel outside diameter and the bushing inside diameter. The difference was unacceptable at .004. At first I thought I had made some mistake in my measurements, so I re-measured the barrel using two different 1" micrometers and the bushing using two different sets of calipers. No, I had not made a mistake. About 5 minutes later, I was ordering an angle bored bushing from EGW. So, the "on target" accuracy testing has been put on hold till the new bushing comes in.

The 38 super is under rated.
You must log in or register to reply here.

Returning to my roots or why did I buy that gun in the first place.
2

A walk on the Mild Side.