Contributor
In honor of the recent coup in Myanmar, a photo of one of the trains my wife and I traveled in Myanmar in 2015. A bonus picture of a military policeman with sandals sitting at the station making sure we stay in line (my wife, Mrs Hedley, the only blond in Myanmar, walking with water bottle and our guide with umbrella). 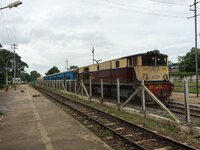 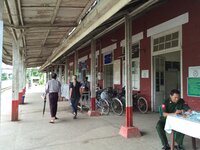 These are three A4 Pacifics, pride of the London North Eastern Railway. The most famous of these is probably The Mallard which held a world speed record of 126 mph

Some of us talk about the romance of riding the rails ... this was (photo) once such moment.

Illegally (I was on duty

), I snapped this now ‘declassified’ Carnegie 1897 photo while switching out cars in Kelker Yard, which is located just outside of Fort Carson ... adjacent to this track was a length of rail whose web read, Colorado Fuel & Iron 1903 & next to that, on a spur, sat two derelict, faded olive drab 1940s flat cars.

Colorado Fuel & Iron (Pueblo, CO), was purchased by John D Rockefeller the same year the aforementioned rail was forged & was one of the antagonists in the tragic 1914 Ludlow Massacre (aka, The Colorado Coal Field War).

After pondering the Carnegie photo that evening, I began thinking about all the troops (& ordnance) who left Fort Carson atop that rail in 1943-45 & especially those who would never make it back to the States.

On Thursday, coming back from my walk, I saw this multiple unit train from a overpass. I find it a bit boring that there aren't so many locomotive-hauled passenger trains here anymore. The multiple unit trains are, however, extremely modern, and provide, for example, easy access for the handicapped. 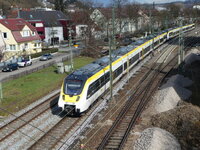 As I young boy, on vacation in north central Wisconsin, I had collected a couple of these marker nails from old crumbling ties, or out of the rock bed. I wasn’t sure what they denoted but recently looked them up. Could mean different things evidently. Age of a repair, or to monitor the condition of ties, etc., but maybe some one has a better description yet. 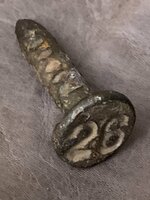 I'm not a big train buff, although I quite like train travel - I love the Eurostar, by far the best way to travel between Paris and London - but just now there is an Orient Express Exhibition on here at the Gardens by the Bay. They transported two actual 1930s carriages here which form the main part of the exhibition, plus this engine, again an actual OE locomotive. The blurb says it's 158 years old.

We went a couple of weeks ago, it was really good. 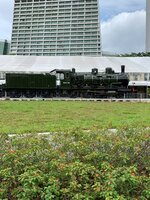 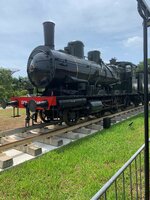 Travelling through the jungles - in my bookshelf. 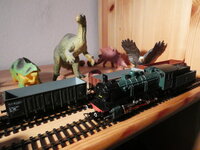 The Rocky Mountaineer. Not my picture, but hope to vacationing on this beauty if the world opens up later this year.

Although I've traveled this part of the world a few times, it was always with a 60-70 lbs backpack with a tent for my shelter.

This train ride has been on my bucket list for decades.

Scarry Knight said:
As I young boy, on vacation in north central Wisconsin, I had collected a couple of these marker nails from old crumbling ties, or out of the rock bed. I wasn’t sure what they denoted but recently looked them up. Could mean different things evidently. Age of a repair, or to monitor the condition of ties, etc., but maybe some one has a better description yet.
Click to expand...

They were originally used in the late-19th C. on theretofore, untreated telegraph poles, sleepers, trestles, timbers, outbuildings & such to record & determine which species of wood & which of the various (wood) treatments would best be resilient to wear, weathering, rot, etc...
You must log in or register to reply here.
Share:
Facebook Twitter Reddit Pinterest Tumblr WhatsApp Email Link
Top Bottom