Daliah who? She was an Israeli model - actress - singer who was prominently featured as a Bond Girl in the 1967 Casino Royale. And I do mean prominently. 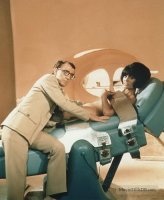 (Lavi with one of the Bonds, "Jimmy", played by Woody Allen...don't ask)
She was also with Dean Martin in the first Matt Helm movie as well starring in a Yul Brynner / Leonard Nimoy (!!) western called Catlow.
I remember first seeing Casino Royale on tv when I was around 10 years old with my Dad and an uncle and when this scene came on...

...my uncle wondered out loud why there was never a blowtorch around when you needed one.
Decades later, after seeing the Daniel Craig Casino Royale with a group of friends, I mentioned that the only thing missing was a hot chick, naked and strapped to a table. One of the guys laughed and said he was waiting for that scene too. This was followed by disapproving looks from our wives.
Daliah Lavi passed away this week aged 74. R.I.P