Quick Overview Of Some Of The Older Aftershaves

I had someone recently ask me if men used aftershave in the 1800's, so I did a quick video of a few of the older potions. What did I leave out? I'm always looking to try old, traditional style aftershaves.

Thank you for an interesting and informative presentation.

The oldest of these, the so-called colognes of Murray & Lanman continue to exist to-day not so much for use as a men's toilet-water, but for the other spiritual and supernatural uses with which they have become associated.
M & L Kananga Water and Florida Water were originally unisex florals, as were all toilet-waters of that time.
Florida Water is a peculiarly American invention.
It was originally named in reference to the mythical Fountain of Youth which was believed to reside somewhere in the State of Florida. Thus, it was believed that any water from Florida might contain magical youthful qualities. Of course, there was no law requiring that water from Florida be actually used in the product, and most probably did not use any.
Apparently, the original Florida Water was essentially a marriage of English Lavender-water with German eau de Cologne (citrus), together with the addition of aromatic oils of clove and cinnamon.
Cologne, Germany gained a reputation for advancing toilet-water with the introduction of new ingredients, producing scents of greater complexity and depth.
Kölnisch Wasser, meaning (toilet) water of Cologne, became world famous and others copied the style, like Hoyt's.
Buyers of that time would have understood the phrase "German cologne" as referring to the Kölnisch Wasser style of toilet-water, still unisex, even then. "4711 Kölnisch Wasser" is the modern-day descendant of that cologne, largely unchanged I believe.

By the way, there were two companies trading under the name Hoyt at that time, both selling toilet-water and both selling German cologne. E.W. Hoyt, of Lowell, Mass. was by far the more famous, and F. Hoyt of Philadelphia, Penn. was the upstart, producing bottles deceptively similar to the other. 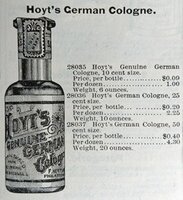 An infringement lawsuit ensued and F. Hoyt, the defendant, publicly claimed victory, but I suspect, they were deceiving the public as to the true nature of the court's rulings.

Pinaud established his perfume house in 1830. He gained fame by creating a perfume for Queen Victoria and became her Royal perfumer in 1855. He parleyed that into a French royal commission from Napoleon shortly thereafter, and his signature creation under the royal warrant was "Lilac Vegetal," as it is now known. Pinaud's products were first introduced to the American market in 1878.

Also, it was not originally called "Lilas de France." Before the designation "Lilac Vegetal" was placed on bottles in the early 1930's, it was labelled "Extrait Végétal Parfum, Lilas de France, meaning "a vegetal extract perfume of French lilacs."
At that time the generic term "lilac vegetal" was long in common use, as there were many other such perfumes, and Pinaud referred to their product as a lilac vegetal well before they adopted the term for use on their bottles. 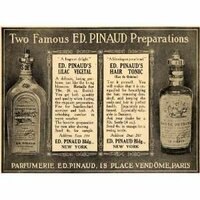 In fact, the "Lilas de France" decorative embellishment on the bottles still appears to-day, but the term only dates from the early 20th century. Before that, the toilet-water was originally labelled "Extrait Végétal A Lixora," as here in an 1891 ad: 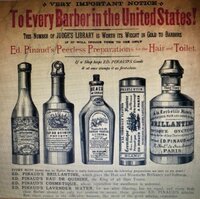 Well, Truefitt & Hill are the oldest perfumers still operating in England, having started in 1805. D.R. Harris, though older, didn't branch out into gentlemen's toilet requisites until somewhat later. Taylor of Old Bond Street dates from 1854. Penhaligons of St. James Street began in 1870, and Geo. F. Trumper of Mayfair started in 1875. All of these houses have scents (currently in production), from the 19th century. You might explore them for truly vintage scents.

If you want individual colognes from the 19th century delineated from those houses:

Taylor of Old Bond Street: Established in London in 1854, on (obviously) Old Bond Street. Original No.74 , is one of their oldest fragrances dating from the late 1800's and was formerly known as Royal Yacht. Their No.74 Victorian Lime fragrance from the same (Victorian) era, is the world's oldest Lime formulation still in production.
Geo F. Trumper: Established in Mayfair, London in 1875. To wit: Marlborough Cologne 1877, Wellington 1876, Wild Fern 1877, Extract of Limes 1880, Astor Cologne 1880, Curzon 1882, Lavender Water & Eau de Quinine 1898. A truly classic English perfumer. All above fragrances are still in production.
Truefitt & Hill: One of England's oldest and most traditional, established in 1805 in St. James Street, London. While their "1805" signature scent is really from the 1850's and was formerly known as Palmerston's Bouquet, and their "Clubman" scent is a descendant of the "Exhibition Bouquet" formula they created for the Great London Exhibition of 1851, their "Freshman" scent derives from one of their first blends in 1805. Not to mention their "Spanish Leather" formulation dates to 1814 and is probably the world's oldest such scent.
D.R. Harris: Established as a Chemist in St. James Street, London in 1790, he branched out into shaving and fragrances a short time later. Two of their oldest formulations are the "Traditional Cologne" and "Freshening Cologne," both dating to Victorian times.
Penhaligon's: Established in London in the 1870's, their original scent was "Hammam Bouquet" in 1874. They created "Blenheim Bouquet" for the Duke of Marlborough a short time later (favoured by Churchill), and still produce other scents created prior to the Great War.
Floris of London: similar to Penhaligons in that they created bespoke fragrances for nobility, gentry, and the wealthy, they were established in 1790 and were frequented by the likes of Winston Churchill, who was known to buy Special No.127 and Stephanotis.

I happen to be familiar with historic British gentlemen's colognes, but I'm sure others could provide info on 19th century colognes from other countries.

Contributor
Nice clip and a good job! Only a couple to add- of the fragrances I have in house: Caswell-Massey Number Six is the oldest, claiming a 1772 date and that it was a favorite of George Washington. I've had some of this on hand since working in Manhattan in the 1970's. Guerlain Eau de Cologne Imperial claims mid-1800's and was made for Empress Eugenia, the wife of Napoleon III.

razorboi said:
Thank you for an interesting and informative presentation.
Click to expand...

RenoRichard said:
Nice clip and a good job! Only a couple to add- of the fragrances I have in house: Caswell-Massey Number Six is the oldest, claiming a 1772 date and that it was a favorite of George Washington. I've had some of this on hand since working in Manhattan in the 1970's. Guerlain Eau de Cologne Imperial claims mid-1800's and was made for Empress Eugenia, the wife of Napoleon III.
Click to expand...

Thanks for the information! I'll have to check those out! Especially Number Six if it's the oldest and George's favorite!