My SBAD was telling me that I needed a sixth new brush in the past 30 days so I figured that I should add this brush in with my order along with cleaning out Charles of his Irisch Moos shave sticks.

This brush is really soft. It definitely rivals the Thaters that I have and it is dense too. Here are my measurements for it.

The handle has a large diameter which I like. I also the real horn handle. My pictures may not show it but if you look really closely, you can see part of the horn pattern in the handle. I love the black color and it has a great shine to it. 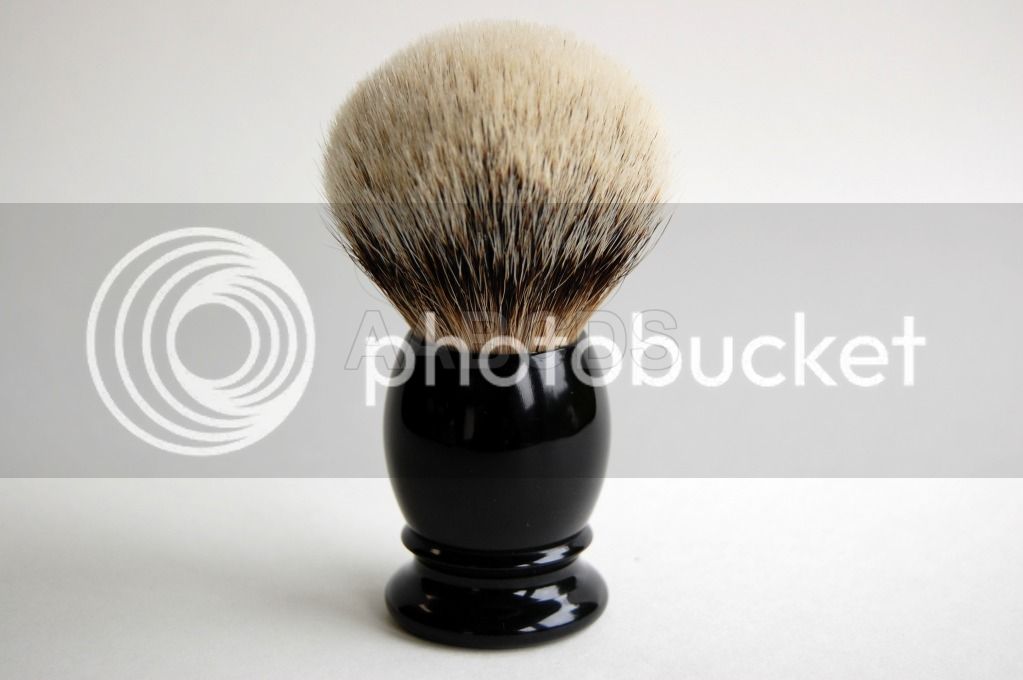 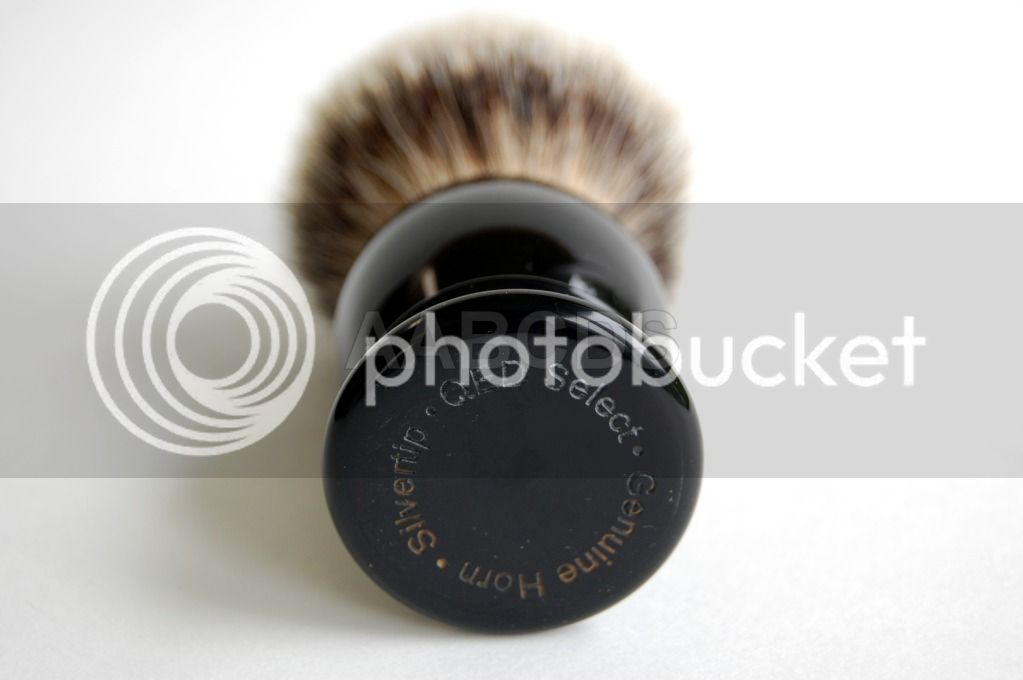 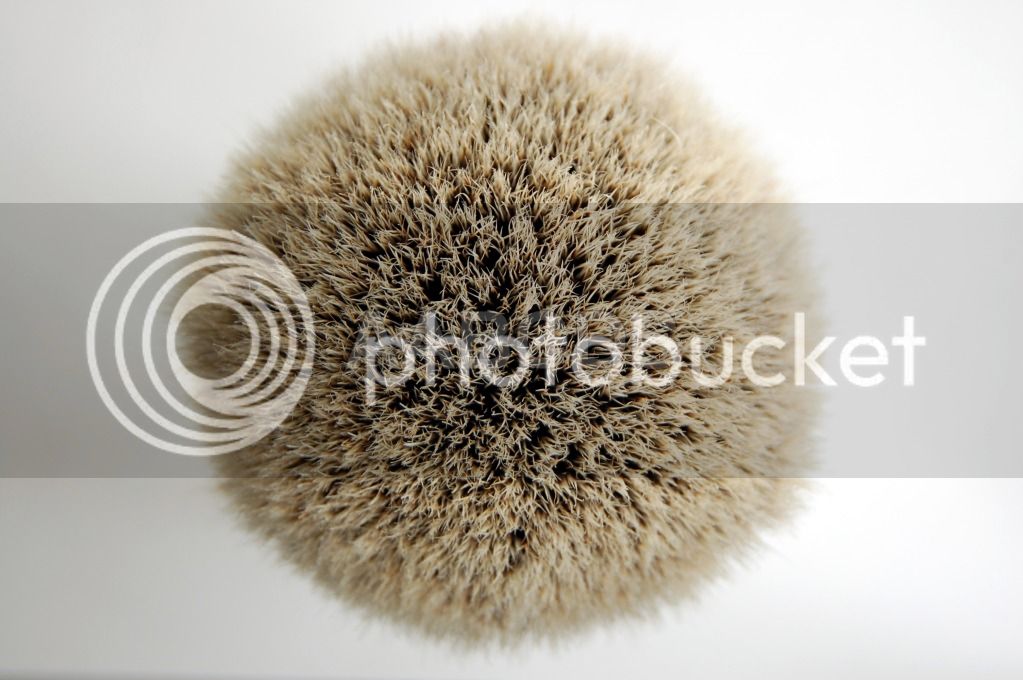 That right thar is a purrty brush!

Thanks, Marty. I wish that there were more shaving brushes with black-colored handles. I think the faux ivory color is boring.

After using 20-22 mm knotted brushes, I've recently come to understand why so many people like big brushes. They just feel wonderful. This brush is my biggest one yet at 27.72 mm for the knot size but it doesn't feel overly big.

Faux ivory is boring, even when done well. I do like the look of the Simpson LE's though-the striping adds something to it. A black horn handle is a new experience though.

Gorgeous! It's especially nice that the engraving is on the bottom leaving the beauty of the horn intact.

Gorgeous! Those are very nice brushes, they are made by Kimson Vu in Vietnam. The knots are quite dense and with very soft tips!

I've been eyeing this brush for a few weeks now at the QED site shaking with SBAD and this doesn't help.... Some post bloom shots would be greatly appreciated sir

Bravado13 said:
I've been eyeing this brush for a few weeks now at the QED site shaking with SBAD and this doesn't help.... Some post bloom shots would be greatly appreciated sir
Click to expand...

Those pictures were taken this morning. I used it once already on 5/10/2012 so those pictures show the brush after it was used. I just used it again this morning and that is basically what it looks like bloomed. Right now, the brush is a little fuller but not by much.

For $110 shipped, I think this is a good deal as far as upper end brushes go. I know that some people would say that anything over $100 is overpriced but you're getting a pretty large knot here not to mention it's a real horn handle. It's advertised as being a 24 mm knot on the QED USA website but my knot measured nearly 28 mm at the base of the bristles.

Charles did a good job of specifying the loft for this brush. The hair is really soft but the brush is not floppy due to the relatively short loft of 53.49 mm. I've only tried the brush twice with the same cream, Trumper's Coconut, so I have yet to use with a soap.
Last edited: May 13, 2012

I had been eyeing the QED horn brushes for some time and this thread pushed me over the edge and to the order button.

After some personal debate, I opted for the black horn brush.

I really have to stop brousing the shaving brush forum as my SBAD has been out of control the past couple of months. I had whittled my collection down to 8 brushes and now I'm back up to about 30.

I'm glad to see I'm not the only one with SBAD!

AABCDS said:
I'm glad to see I'm not the only one with SBAD!
Click to expand...

Can I go ahead and blame you when my wife asks why I ordered another brush? Something to the effect, "but dear, look at those pictures he posted of that great-looking brush . . ."

The brush AD seems to be the only one that won't let me go. I only have about 3 soaps, 3 creams and 5 DE razors sitting in the shave den, and really no desire to add new ones to those. BUT, the brushes . . . I've been on a Simpson 2-band surge lately and my stockpile of those is getting ridiculous. Thank goodness I haven't seen a Polo 12 2-Band anywhere or that would be another purchase I would be trying to justify to my wife.

oversaturn said:
Gorgeous! Those are very nice brushes, they are made by Kimson Vu in Vietnam. The knots are quite dense and with very soft tips!
Click to expand...

Ditto! It was worth the three week wait for a brush under $70 w/ a natural buffalo horn handle. I got mine with loft set at 52mm and its amazing!
You must log in or register to reply here.

The Effect of Loft on a Brush