Moderator
I know there are A few gamers here and folks with kids that game. So which one are you going to buy?

I will be getting one but I can’t decide. Currently I have an Xbox One. But I’m not a diehard fan of the Xbox platform.

Any reason why you would choose one over the other?

PS5. Never really had an Xbox of any generation and the Xbox exclusives I've wanted weren't enough for me to get one, but PS had more exclusives I've wanted over the years. The vast majority of the big name games are on both systems so there's that. I also have like 3 years of PS+ paid up so I'll just stay on PS. Not really a fan of the PS5 hardware aesthetics though; it looks stupid and is going to get dirty easily.

PS guy since 1st gen, no reason to switch.

I've always been a fan of computers.
I like that they are upgradeable, access to tons of free & inexpensive games.
If I had to choose a console I'd probably go with a PS for the exclusive games.

Xbox since the original. I have owned a few PS systems and keep returning to my Xbox, so I'll be buying the new one when it comes out. 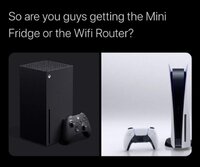 Apologies Mr @Toothpick : have you looked at the new Intellivision thing coming out on 10/10/2020? I know all the prepurchase sales are done, but I'm old and I still have an original Intellivision that needs work. The games are really reasonably priced, and somehow they learn how good or bad the players are and level the playing field so that Granny has a decent chance to smoke your punk teenaged brother!

I'm looking forward to it, if you couldn't tell. Sorry for the derailment Gents! Carry on!

Not a huge gamer. But, red dead redemption is the driving force behind the ps4 that’s been in my home the last few years. I also found I enjoyed the uncharted games and a little bit of the fallout games. Only RDR is enough for me to buy a platform, but there’s not way it will be an xbox. PS platform has always been my preference.

Chances are that I'll eventually will get both for only reason that there are games that I like that exclusively made for one system or the other.
Due to cost mostly, but also wanting to wait out launch issues/bugs to be fixed, It'll probably be at least a year after launch of either system that I'll get one.
H

Play station 5 of course, I have been using play station since I was young and I don't plan on switching to xbox.

Rustyshackelford said:
Not a huge gamer. But, red dead redemption is the driving force behind the ps4 that’s been in my home the last few years. I also found I enjoyed the uncharted games and a little bit of the fallout games. Only RDR is enough for me to buy a platform, but there’s not way it will be an xbox. PS platform has always been my preference.
Click to expand...

I just downloaded RDR 2 on my Xbox!

Moderator
RDR 2 is the reason I bought the Xbox One. I wish XBox had a good MLB game. I heard rumors MLB The Show will be coming to the Xbox. If so I may stick with the xbox. But I‘m kinda leaning toward the PS5

I'll admit that lack of a MLB game is a bummer. I have a friend who switched to PS just for that reason. Hopefully Xbox will address that oversight.
A

I'm still here using my PS2
Love those classic games for the PS2... Also got some PS1 games..

With the last of us 2 releasing next Tuesday, I guarantee they will also re-release it on ps5.

What I don't get is why Sony isn't making the console backwards compatible like the Xbox is.

From a Newsweek article:

A huge feature in the new consoles is backwards compatibility, allowing players to play their old games on newer systems. The Xbox Series X will be able to play Xbox One games, backwards compatible Xbox 360 and original Xbox games.

Sony isn't doing all that, at least not that far back. I read most ps4 games will be. And select ps3 games will.

This a huge selling point for the new X.

I might get the X-Box just so I can reliably play my older Original XBox games.

For me, neither. I'm a PC gamer, but I also have a Nintendo Switch.
For the Xbox versus PlayStation debate, I'd say it comes down to which exclusives you want more and which controller you like better.

PS5. I’ve had Playstations all the way. Any word on how much it will cost?

It was a Stratocaster with a whammy bar!

Moderator
PS5 their exclusives are much better. Just seeing the promo for Horizon Forbidden West is enough for me. I have a bunch of downloads as well as discs and all of that will transfer forward to the PS5.
You must log in or register to reply here.
Share:
Facebook Twitter Reddit Pinterest Tumblr WhatsApp Email Link
Top Bottom