Below is the optimum lather table and review of Proraso Single Blade (PSB) shaving cream from my lather optimization guide in the ShaveWiki. Please see the guide for an overview, a disclaimer, and general information about optimizing lather.

Back in June, @Cal generously donated a large sample of PSB Wood and Spice for evaluation. (Thanks, Cal!) I enjoyed optimizing PSB! It is a good cream, even though it causes me a little bit of post-shave irritation. PSB was clearly going near the top of my list, but I didn't know exactly how high until the ranking tests against B&M and DG. PSB beat B&M, but was narrowly defeated by DG. At this point in time, PSB could be considered by many as the best value (price for performance) in my optimum lather table. 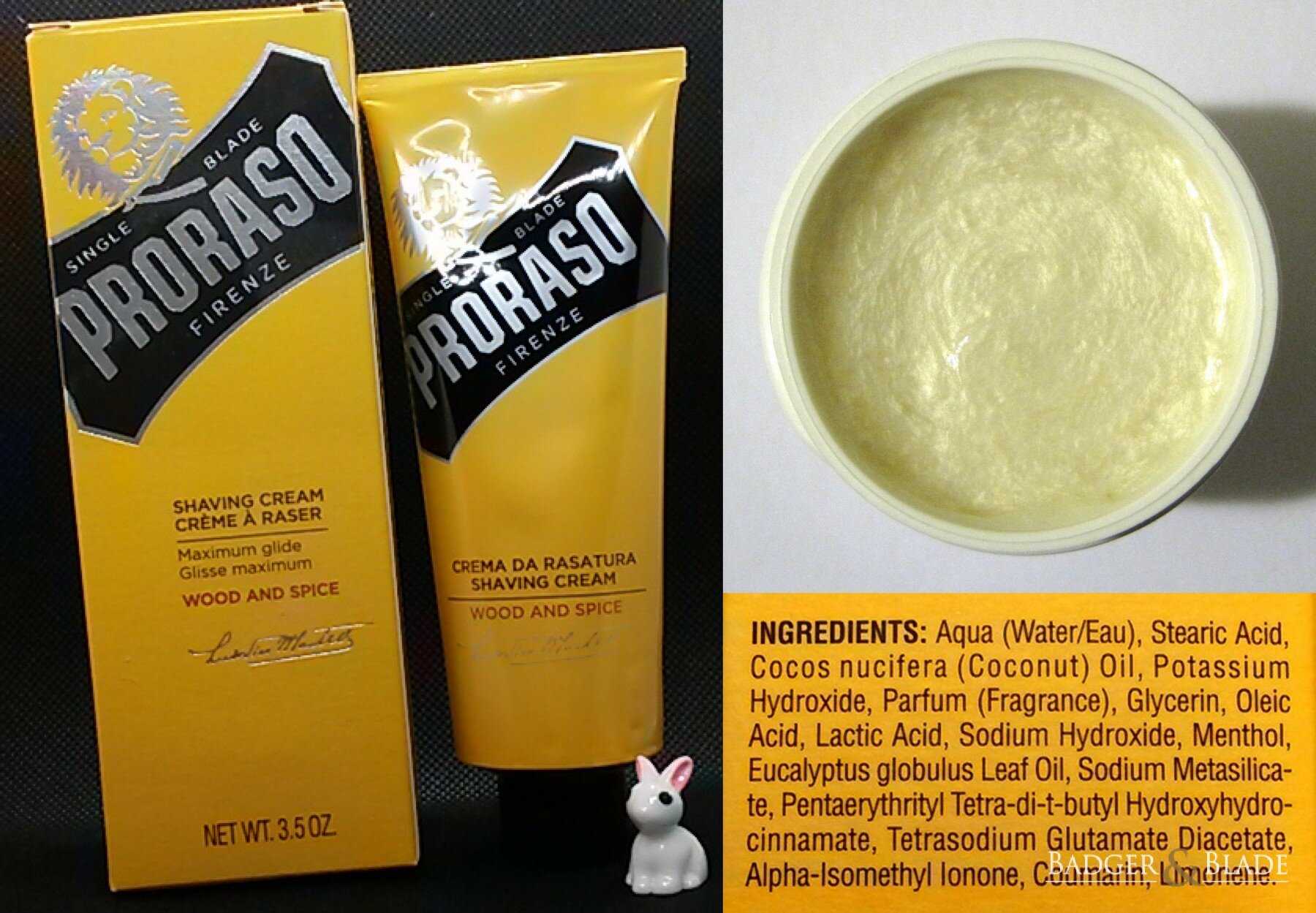 Purchase Date: January 12, 2018. A sample was received on June 16, 2018, from @Cal, who generously donated the cream for evaluation. The sample was then placed in a small jar and photographed. The other photographs were taken by Cal.

Scent: Described by Proraso as a "woody fragrance" with base notes of "vanilla and rockrose" and top notes of "cumin and saffron" that evolve into "cedar and sandalwood", I was neither offended by nor attracted to the scent.

Optimum Lather Overview: Sheen is okay. Lather has some "peaking" and yogurt-like behavior of "stringiness". Lather thickness is pretty good, but lather is somewhat "airy" with some noticeable bubbles. Adhesion is okay and application is pretty good. Scent is faintly present throughout the shave, and the cooling effect is moderate, not strong. Slickness is generally good to very good with a few moments of moderate friction. Cushion/protection is okay or pretty good. Post-shave is very good with respect to moisture and good with respect to comfort, but there is a tiny bit of irritation. A little soap scum is usually left on the brush handle.

Optimization Details: Optimizing the cream was relatively easy compared to other products. The water-to-cream ratio was nonsequentially varied from 6 to 16, and over this range, it was clear that slickness and cushion increased with less hydration. Slickness, for example, was generally okay with several moments of stick-slip at a water-to-cream ratio of 16, but was generally good to very good at a water-to-cream ratio of 6. However, it also became clear that, at least for my skin, the cooling effect and post-shave irritation increased with less hydration. I wanted to drive the hydration lower for more slickness, cushion/protection, and post-shave moisture, but the cooling effect during the shave and the post-shave irritation became too significant for me. Those limiting factors resulted in an optimum water-to-cream ratio of 8. Lather-building time was only briefly investigated since more time only seemed to increase lather volume and drop the slickness a little bit without gaining much of anything in the way of cushion/protection.

Ranking Details: The first ranking test for my optimum lather with PSB was against my optimum for Barrister and Mann (B&M) shaving soap. The slickness was similar, but slickness seemed to vary more with B&M, and overall slickness with PSB seemed a little better. Cushion/protection with PSB was definitely better. Post-shave moisture with B&M seemed a little better than PSB, but comfort with PSB was better. The post-shave feel with B&M didn't involve recognizable irritation, but it just didn't feel as good. Overall, PSB beat B&M. The second ranking test was against Declaration Grooming (DG) shaving soap. The DG lather had much better sheen, peaking, stringiness, and application. Slickness was better with DG, cushion/protection was better with PSB, and post-shave moisture was better with DG, but post-shave comfort was a little better with PSB because of, I believe, PSB's cooling effect during the shave and the apparently closer shave that I got with DG. Overall, it was close, but I had to give the edge to DG.

Thanks for the detailed review, I found it very enlightening.

ajkel64 said:
Thanks for the detailed review, I found it very enlightening.
Click to expand...

Next up in a few weeks will be Proraso Red, also from @Cal.
A

how can one get a tube of this Proraso wood and spice, all I see online is the 200ml bag, and I don't want to have that big of a bag laying around. I had a sample of the wood and spice and blasted through it.

Great write up thanks, the PSBs are on the to try list.


andromeda673 said:
how can one get a tube of this Proraso wood and spice, all I see online is the 200ml bag, and I don't want to have that big of a bag laying around. I had a sample of the wood and spice and blasted through it.
Click to expand...

You know I actually went down a small rabbit hole yesterday reading about these creams (first I'd seen about them) and the consensus on threads here on B&B was they're only sold in the large bags in the US. I think one or two users were able to order smaller sizes from European websites. I've got enough soaps and creams for now...but when I'm ready I want to try the Lime and the Cypress and my plan was to try to find someone who would go halvies with me and split 1 bag of each.
A

The key to buying some amounts is going to be multiple sample sizes either in one chunk from one seller, or going through multiple vendors

Frozenshades said:
Great write up thanks, the PSBs are on the to try list.
Click to expand...

I have a lot of items on my to-try list.

PSA: WCS has a Proraso sample pack that includes these. Maybe they always have but I don’t recall seeing it before.

Looking forward to trying these 3.

Used green and white before but the red sandalwood is also new to me. I didn’t see samples of the PSBs anywhere else though! Proraso sandalwood or proraso red is one of my favorites, I just started using it a few weeks ago, no burn really and it smells great
You must log in or register to reply here.

Rockwell shaving cream, at least the old version, is middle-of-the-road