Just received an interesting email from Maggard's in response to my question about when they will be carrying the super formula products.

FYI, we just found out that all the new Proraso packing is not a new formula.

This is direct from the official US distributor. They just had a conference call with the Proraso team in Italy this last Friday to get clarification. Apparently it is a poor translation. They were trying to bring attention to the new packaging apparently with the term "super"

Just a heads up:
The new product is not actually a new formula, it is new packaging. There is a bit of confusion, because the labeling says "Super Formula" which has led us (here in the US) to believe it is brand new product - and it isn't, it is actually a "lost in translation" scenario, indicating the new packaging change. Same products and formula, different packaging ... essentially.

That is interesting to know. I haven't used the "old formula" before so I don't have anything to compare it to.
A

compare the ingredients list from old to new and see what's missing vs what's there, and then that will tell if it's new or not.

I like the old logo better then the new one, but logo aside I do like the new glass bottles and so once winter hits I'll score a bottle of the red aftershave and a container of the red soap, as that is one of my favorite combos. Let me tell ya!!!!!

MNshaver71 said:
Just received an interesting email from Maggard's in response to my question about when they will be carrying the super formula products.
Click to expand...

That's hilarious! I guarantee some will still insist it's a different formula.

MNshaver71 said:
Just received an interesting email from Maggard's in response to my question about when they will be carrying the super formula products:
"The new product is not actually a new formula, it is new packaging."
Click to expand...

So how come the ingredients are different?

I have not tried these new products, but the ingredients are not the same. It makes 0 sense to call a new packaging or new labels/colors "new formula". In English, in Italian, or in any other language. New packaging is not new formula. Something got lost in translation there, but it's not the "formula" part.

Cal said:
So how come the ingredients are different?

Good question...maybe something was "lost in translation" during the conference call between the company and the US distributor?
A

well as mentioned go back to post 10 and take a look at the ingredients list and then see what the difference is there, if something is missing and or added to either new vs old, it's new mix and formula, plain and simple.

I'd love to see the blue in a tub form, come on Proraso you can do it.

Let's shoot for the moon. How about a blue tub and also the yellow in a tub and/or cream.

branford said:
Let's shoot for the moon. How about a blue tub and also the yellow in a tub and/or cream.
Click to expand...

Man, yellow in a tub would be so awesome. It's a unique product: really great lather and the scent... cocoa butter, cream and a hint of banana. It's awesome. I don't think they will do it though.

I fear the yellow will remain a can-only product for the foreseeable future.

Proraso added a blue pre-shave with the product redesign and new formula soaps and creams. I was surprised they didn't also add a blue soap. Maybe we'll get it with the next product update in around 5-10 years.
A

since being converted into a wet shaver here, I've burned through two tubs of the green one tube of the white and then one tub of the red. I'll always have a proraso product in my rotation, it's just in my nature I guess.
X

MNshaver71 said:
Just received an interesting email from Maggard's in response to my question about when they will be carrying the super formula products.
Click to expand...

Funny, SUPER marketing trick...... ; they need to restart production as they were closed.....

It's not the same, the new one is more creamy and it's confirmed by the INCI, where you can see the Shea butter in higher position.

So, Im confused. Is it a new formula or not? I have only ever tried the tube version, and want to try the tub, but want to make sure I get the best performing version, if there is one?

Zoost said:
So, Im confused. Is it a new formula or not?
Click to expand...

Yes, it's a new formula. Different packaging (although not much on the Red Tub) and ingredient tweaks and changes.

Read page 1 and you'll find it all there.

I have a couple tubs of red tub super formula. I used it a few times. I see no difference between it and the Green Proraso. I do not care for the smell of the Proraso red.
I much prefer the green with menthol of which I have many tubs.
Do not be fooled by all of this packaging.
Shaving wise, both will get the job done. But the Green to me is the best.

There have been some actual product changes, for instance they have added witch hazel to The Proraso green after shave. And as far as I could tell there has been a change in ingredients To at least the shaving creams so it is not just a packaging change. So either someone’s Italian or English is sketchy!.

Does anyone know what the NEW proraso in a tub looks like? I can't find it anywhere.

Your Majesty said:
Does anyone know what the NEW proraso in a tub looks like? I can't find it anywhere.
Click to expand...

The label should say "Super Formula"... 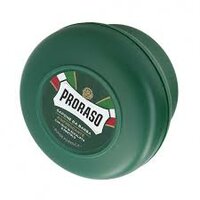