Vendor
We had these made for us - give us some feedback! (The razor is there for scale and possible use, read on.) They are somewhat of a "hold all" type of vessel. Would you use one? If you got one what would you use it for? If the neck of the one on the left were made smaller would you use it to put your razor into after use?

Contributor
Heck yea! These would fit in seamlessly with the nautical theme SWMBO has in place for our bathroom. I don’t know that I’d stick a razor in there, but it would be a good fit for her makeup brushes.

Contributor
They look gorgeous.
Perfect for soap or to hold my straight razor and/or toothbrush and toothpaste . Y’all just keep knocking it out of the park.

They all look good, but I am drawn to the one on the right.

I'm new to all of this. I already have a bunch of stuff. Now I want this too. I can't pick which one looks the best. I'm so bad at this. What would be cool is one with a lid as well to cover the puck from any settling dust or splashing from water.

Moderator
The one in the middle. I can see it with a solid top with holes in it - like a toothbrush holder.

Take one and put a mustache guard on it, a handle, and make it a coffee mug. I’ll buy it right now.
B

How deep are they? They look nicer than the cup I currently soak my brush in.

boilerphan said:
How deep are they? They look nicer than the cup I currently soak my brush in.
Click to expand...

These are prototypes, of course. The First Mate took one look and said, "Ohhh, they are adorable!!" We will have some more made in the next firing as well that will be slightly different. For now they will all be Gunmetal with our logo on the outside like you see here. At this point we wanted to have some made, show you what they look like, and collect feedback on them. It may well be that after we hear back from you we have a series of them made after the holidays and see how customers like them.

Toothpick said:
The one in the middle. I can see it with a solid top with holes in it - like a toothbrush holder.

Take one and put a mustache guard on it, a handle, and make it a coffee mug. I’ll buy it right now.
Click to expand...

Ditto, although I don't know that it needs holes in the top - leaning a razor in each corner as it is would be great, too!

Moderator
So many uses for each one, they are all great looking containers. You could use them anywhere in the home, for your loose change, in the bathroom, LOTH could use them for numerous uses. Great work Captain.

Vendor
The bottom is smooth and so the razors don't want to quite "stand up." Sometimes the easiest solution is the cheapest. A small bit of Saran Wrap in the bottom provides the perfect amount of friction in this picture.

Let me know your preference: Keep the height and dimensions where they are now, knowing you can provide some friction as needed. OR make the vessel taller and with smaller diameter so they will stand up somewhat. Which makes sense to you? I am trying to keep in mind that as the customer grasps the DE razor he will want to easily snatch it without even coming close to the blade.

Will be interested to hear what you all think, let me know. 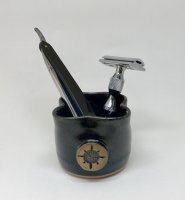 I vote for taller with a bit smaller diameter. They could double as a brush soaking cup or razor storage as your picture indicates .

They could be used to hold q-tips, cotton balls, and other bathroom accouterments. Also I may use them to plant herbs in.

My first thought was coffee mug. Bigger of course?
A grog mug

We are having a limited number of them made in Gunmetal as seen in the picture above. Based on feedback here as well as a post on our Facebook we are having the middle one made in the picture. It will be slightly taller and somewhat narrower. This to make it easier for the razor and/or toothbrush to stand up straighter. Each will come with a small bit of Saran Wrap inserted into the bottom which is perfect to add enough friction for the bottom of the razor to "bite" into.

We are also having the one on the right made based on feedback. It caught the eye of guys for storage of blades and whatnot as well as an ideal vessel to presoak their brush. Both of these are the type of thing that once you have them you can find a lot of uses for. Pricing on both is to be determined but likely around $18.00 or so.

We will see how they sell and seek out feedback from customers. The release date is going to be by December 5 or so. Will post an update once we get closer. Will also let B&B have a two day head start on ordering them at which time they will be posted on Facebook and then poof - gone.

Moderator
Thanks for the information, I am seriously thinking about getting some for my Christmas present.

Moderator
Waiting patiently for the December the 05th.

ajkel64 said:
Waiting patiently for the December the 05th.
Click to expand...

Good news, they are on schedule. We expect to have them on the site by this coming week, certainly by the end of the week and possibly actually by the fifth.

After the prototypes were made in the picture up above we have had only a very limited number made during this first production run that will be released this coming week. The one on the right will look just like that one up above. The one in the middle will be ever so slightly taller and somewhat narrower all 'round. The narrowness will help the products put inside to stand up. I have also experimented and found a terrific product that will be added to the interior that provides just the right amount of friction so the toothbrush or straight razor or DE razor "sticks" to the bottom. It works like a charm and they stand right up where you need them - a perfect solution.

This limited run is intentional, we did this very thing with our recently released copper lather bowls. Once the first production run has been in the hands of our customers we email to collect feedback from actual users. With that new information in hand we look for any possible way to tweak the design to enhance what is already a good product. It is then in the second production run that we up the quantity and they become more fully available. Timeframe on that second production run will have them available maybe in February/early March.

Once they are loaded on the site I will update this thread here so you all will have first dibs. Only after a day or so will I post on Facebook and then, poof, they are gone.

Vendor
It is official - they are now available for sale!

Shipment is due to arrive tomorrow and we are now taking orders. There is a very limited number available as mentioned up above. There will be more available at the end of January if you do not get what you want. Here is a link for your convenience: All Products — Captain's Choice 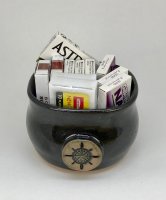 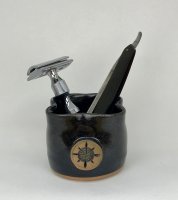